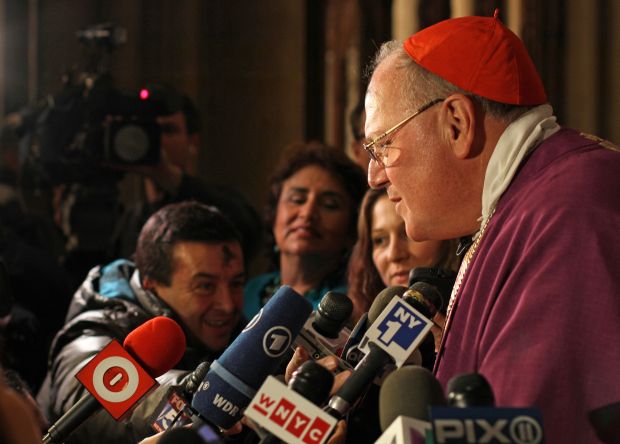 Thanking communications professionals who work for the Catholic Church, Cardinal Timothy M. Dolan of New York also shared with them tips he said he learned at the "school of hard knocks." Cardinal Dolan is seen in 2013 speaking with reporters after celebrating an Ash Wednesday Mass at St. Patrick's Cathedral. (CNS photo/Gregory A. Shemitz)

ROME (CNS) — Thanking communications professionals who work for the Catholic Church, Cardinal Timothy M. Dolan of New York also shared with them tips he said he learned at the “school of hard knocks.”

When facing reporters, he said, “their initial posture often might be bellicose, but that should only challenge us, never scare us or make us uncomfortable.”

The cardinal gave the keynote address April 28 at a conference for Catholic communicators sponsored by the school of church communications at the Pontifical University of the Holy Cross in Rome.

Cardinal Dolan highlighted the communications success of Pope Francis, who, he said, is a natural communicator of Christian truths and the Catholic faith. His words and actions are not a public relations ploy or gimmick, “it’s just who Pope Francis is. Nobody, no communications expert, had to sit down with him and say, ‘Holy Father, listen, we think it would really be a great idea if you concentrated on talking about God’s mercy and forgiveness.'”

“There’s no way somebody can script who he is; what you see is what you get,” the cardinal said. “The world is responding because his whole life is dedicated to conveying the good news simply and sincerely in everything he does.”

One of the cardinal’s tips for the communicators was to remember always that they are Catholic.

“Always put Jesus first. People have a hunger for meaning in their lives, for the truth,” he said. “I have made a vow: Never will I give an interview without trying to mention the holy name of Jesus.”

After all, he said, he is being interviewed as a bishop and pastor, not as the mayor.

While every bishop today automatically becomes a spokesman for the church, ordination is not a requirement for speaking on behalf of the church and trying to share the truths it teaches, the cardinal said.

“The days of old, fat, balding bishops being the best spokespeople is long gone, if they were ever really here at all,” he said.

What is essential, however, is faith and speaking the truth, “even when we are dealing with bad news,” he said, because “people expect utter honesty and transparency from the church.”

Being professional and transparent will not win over everyone all the time, he said. Church communicators are trying to bring a message to a world that “doesn’t always seem interested in what we have to say, misunderstands it or is downright hostile to it.”

“I often tease journalists that they more often than not ask me about the ‘olds,’ the weary exhausted stories about the church rather than the news,” he said.

“Every communications outlet has a bias, a slant — that’s natural, that’s to be expected,” he said. “We Catholic communicators also should have our own bias and that slant must always be pro-church; we do not apologize for that.

“Just as we don’t like it when the media caricatures us, we should not stereotype them.” Some “twist and distort always what we say and what we do,” but that does not mean every journalist does. Even when a journalist appears to be on the attack and one must respond for the good of the church, he said, “we must be careful in these situations to make certain that we always respond in charity and love.”

NEXT: Pope to greet new commission on abuse prevention as it meets first time