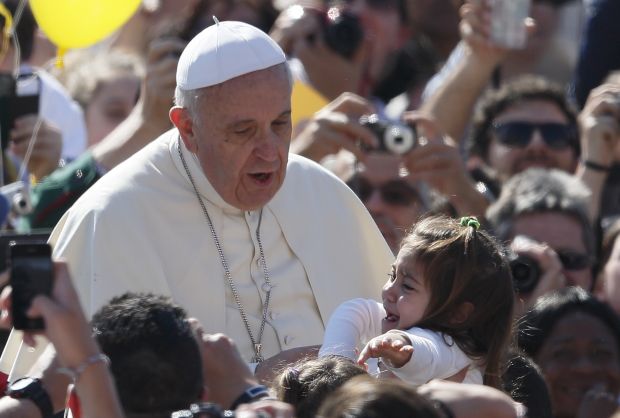 A child reacts after being kissed by Pope Francis during his general audience in St. Peter's Square at the Vatican April 30. (CNS photo/Paul Haring)

Christians need the help of the Holy Spirit to “go beneath the surface of reality and peer into the depths of God’s thinking and his plan of salvation,” he said.

During his weekly general audience in St. Peter’s Square April 30, the pope returned to a new series of audience talks on the seven gifts of the Holy Spirit: wisdom, understanding, counsel, fortitude, knowledge, piety and fear of the Lord. The audience drew tens of thousands of people, including numerous pilgrims who attended the April 27 canonizations of Sts. John XXIII and John Paul II, whose images could be seen on banners still hanging from the facade of St. Peter’s Basilica.

In his catechesis, the pope focused on the gift of understanding, which, he said, is not the same as “human intelligence or intellectual ability.”

Rather, he said, it is a gift of the Holy Spirit that comes from sharing in God’s life through faith and baptism.

“When the Holy Spirit dwells in our heart and illuminates our mind, day by day he lets us increase our understanding of what the Lord has said and done,” his teachings and the Gospels, the pope said.

“One can figure out a situation with human intelligence, with prudence — that’s all right. But to understand fully what’s going on as God understands it is an effect of this gift,” he said.

“Obviously it doesn’t mean that a Christian will understand everything and have complete awareness of God’s plans,” he said. But it does mean people of faith will be able to see beneath the surface and recognize how God’s plan of love is unfolding in their lives.

Even the disciples — for example, on their way to Emmaus from Jerusalem — were unable at first to recognize the risen Christ walking by their side. “Their eyes, veiled with sadness and desperation, were not able to recognize him,” the pope said.

But when Jesus explained the Scriptures so they could understand why he had to suffer, die and rise from the dead, “their minds opened up and hope was rekindled in their hearts,” he said.

“And this is what the Holy Spirit does with us. He opens our minds to understand better, to comprehend things better,” including the workings of God’s grace, the workings of the everyday world — “everything.”

“Let us ask the Lord to give us, to give all of us, this gift to understand the things that happen” in life as well as the word of God in a new light and with fresh spiritual insight, he said.

NEXT: Cardinal shares media tips he learned at ‘school of hard knocks’