In Nigeria, bishop advises country to channel youths’ energy — or gangs will 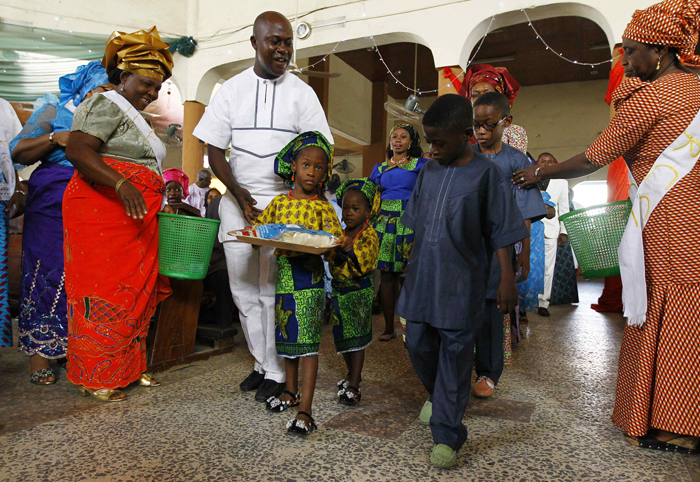 A family walks with gifts toward the altar during a New Year's Mass of thanksgiving at Holy Rosary Church in Abuja, Nigeria, Jan. 1. (CNS photo/Afolabi Sotunde, Reuters)

“The challenge here lies in how Nigeria plans for the future of its youths. Youths’ dreams and idealism need to be properly managed,” he said during the 43rd Convocation Lecture at the University of Nigeria, Nsukka, in late March.

“It is the duty of the government to ensure that it creates the environment to trap the energy of the youth and to channel it toward national development.

“When a government or a parent fails in this regards, other platforms will become available, and drug barons, gang leaders, criminal rings and so on will recruit our children and offer them a future,” Bishop Kukah said. “So, rather than glibly talk about jobs and jobs, there is the need for concerted effort to win the minds of the youths.”

The bishop criticized the government’s use of military options as the solution to end the insurgency in parts of northern Nigeria.

“By making this a military engagement with a budget attached to it, the government has created a situation that would naturally warrant a military solution and almost eliminate the human aspect of this crisis,” he said. “For, as the military pushed on with greater firepower, we saw more death and destruction. As both sides escalated their war strategies, ordinary citizens became the victims of the excesses.”

Bishop Kukah regretted that the insurgency was allowed to escalate to its current state, which has left thousands dead since 2009.

He blamed the federal government and leaders in northern Nigeria for failing to live up to their expected responsibilities, and he suggested creating a federal counterterrorism office with experts from different countries.

“We will not resolve these issues by focusing on rehabilitating members of the armed forces; terrorism is a tactic, and it requires science, not sorcery, moral exhortations and pilgrimages to resolve the issues,” he said.

The bishop also said that for the counterinsurgency program to be successful, its leaders must communicate with local people.

“Are parents in the community aware of their children’s involvement or where they stand with the insurgency?” he asked. “How do parents and relations react to a sudden show of wealth by young people who were hitherto unemployed?”

NEXT: Lebanese students discover a smile is a two-way street