Lebanese students discover a smile is a two-way street 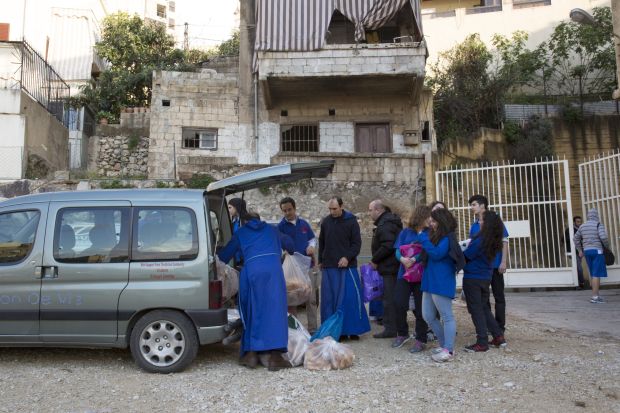 Students at St. George School in the Zalka section of Beirut help Mission of Life brothers fill a van with aid distributed during a Lenten outreach March 14. (CNS photo/Dalia Khamissy)

BEIRUT (CNS) — Bringing the face of Jesus to the poor is an experience a group of Lebanese 10th graders will long remember about this Lent.

As Mission of Life Sister Lina Maria Dib prepared the students for their first outreach, she led them in prayer and told them: “A lot of the situations you see will be unusual for you. But we are going to share our smile. And when you come back you are going to feel happy inside.”

The students, at the Maronite Catholic-run St. George School in the Zalka section of Beirut, belong to the first Youth of Life group formed by the Lebanese order, Mission of Life. An adept organizer, Sister Lina Maria divided the group into small teams, each of which would visit two families or individuals that day, accompanied by a missionary from the order or one of its experienced volunteers.

One of those visits was to Nayla, who lives in a tiny, dingy concrete dwelling adjacent to the rubble of an abandoned stone building. Catholic News Service changed her first name to protect her privacy.

The elderly widow wearily answered her door, almost gruffly, but her face lit up as soon as she recognized Sister Lina Maria. The three Youth of Life teens greeted her with smiles and bags of basic food items.

Nayla invited the visitors to sit on her worn sofa.

“I’m going to tell you stories you never heard,” she said in her raspy voice as she settled into a wobbly plastic chair beneath a collage of holy pictures — including an image of the Sacred Heart of Jesus and Lebanon’s St. Rafka affixed to the cracked wall.

As Nayla told a fable about a king and a government official, the youth listened, wide-eyed. Nayla then relayed the miracle of a woman who had a tumor on her neck and was healed through the intercession of St. Charbel. 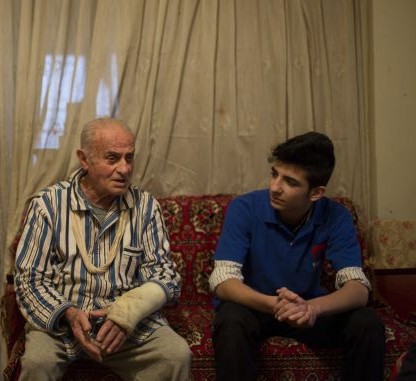 A Lebanese man talks with a student during a Lenten outreach visit by a group from St. George School in the Zalka section of Beirut March 14. (CNS photo/Dalia Khamissy)

Nayla’s adopted street cat darted through the door, cranking his head to scrutinize the visitors, and scurried back outside.

“He comes and goes as he pleases,” Nayla said, pointing to the soft bed she assembled for her feline friend, behind her on the uneven tile floor. She opened the stained door next to her to reveal a cubbyhole area for cooking.

Without revealing details of her personal predicament, Nayla mentioned that someone recently said to her, “You have (grown) children. You don’t need help,” a remark made with the assumption that her children would care for their elderly mother.

“But a priest came to visit me and said that I do need help,” Nayla added.

She paused a moment to reflect, then said: “Lots of people make mistakes. Life before was completely different than now. Kids used to respect their parents.”

She kissed each of her visitors when they left and told them to come back, anytime.

The Mission of Life community visits some 350-400 impoverished families each month as part of its Streets’ Mission, reaching out to all in need, regardless of age, color, race or religion. Its missionaries are easily recognized by their royal blue habits, with volunteers wearing T-shirts in the same color, affixed with the order’s logo depicting helping hands. 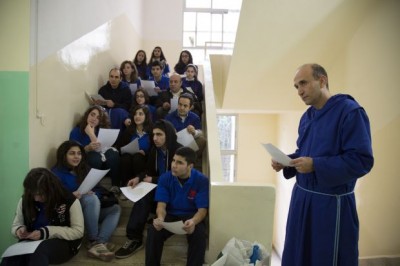 Students pray on the stairs March 14 before they start distributing aid during the first Youth of Life visit by a group from St. George School in the Zalka section of Beirut. (CNS photo/Dalia Khamissy)

Founded in 2000, the order, more commonly known by its French name “Mission de Vie,” is devoted to serving the poorest of the poor in the country. Aside from the 33 sisters and brothers in the order, more than 500 volunteers are involved in its mission. About 100 of them have completed the “School of Life,” a spiritual and humanitarian formation program carried out over four years.

After their mission, the St. George students regrouped with Sister Lina Maria at the school. They gathered in a circle and prayed, thanking God for the experiences and asking blessings upon the people they had visited.

Some of the students expressed individual intentions.

“Thank you, Lord, for the people we met and how they smiled to us,” said Mario Farhat, a 15-year-old Maronite Catholic. “We will keep these smiles in our hearts.”

Sister Lina Maria asked the students to share some of their impressions of the visits.

“I was about to cry at first to see her so poor,” admitted one of Nayla’s visitors, Rudy Saliba, a 15-year-old Greek Orthodox. “But then I felt happy because she was smiling for us, and she showed us how God loves her.”

“When you see these cases, you feel your own problems (are) so small compared to theirs, and you see that life is all about happiness and sadness,” said Stephanie Geagea, a 15-year-old Maronite. “There are lots of people in need, but too many people overlook them. If it wasn’t for this beautiful mission, I wouldn’t be exposed to this. I want to serve more and to help more. And not just during Lent, but always.”

PREVIOUS: In Nigeria, bishop advises country to channel youths’ energy — or gangs will

NEXT: Praying Lent: Thursday of the Fourth Week of Lent