Jesus can raise everyone from the tomb of a dead, tired soul, pope says 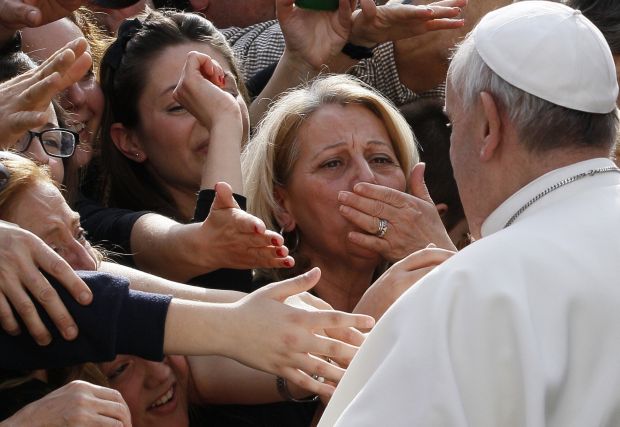 A woman blows a kiss as Pope Francis greets the crowd outside the Church of St. Gregory the Great in Rome April 6. (CNS photo/Paul Haring)

VATICAN CITY (CNS) — Come out from the dark cave of pride, sin and death and into the light of a new life with Christ, Pope Francis said.

“Take away the stone of shame” that is keeping you trapped inside a life that is dead or painful and be raised up again by Christ, he said in a homily April 6.

The pope also gave away thousands of copies of a pocket-sized edition of the Gospels, telling people to always keep a copy with them to read snippets every day while in line or while commuting. But he said it was probably best not to read while standing in a crowded bus because it was better to keep an eye out for pickpockets.

The pope’s remarks came during a late afternoon visit to the Church of St. Gregory the Great on the outskirts of Rome. Before he celebrated Mass, he met with young people, the sick and elderly and heard the confessions of a number of parishioners.

In his homily and during his Angelus address at noon with pilgrims gathered in St. Peter’s Square, the pope spoke about the day’s Gospel reading from the Gospel of John (11:1-45), which recounts Jesus raising Lazarus from the dead.

When Jesus went to Lazarus’ tomb, he asked that the stone sealing the entrance be taken away. He then “cried out in a loud voice, ‘Lazarus come out!’ And the dead man came out,” the Gospel says.

Jesus is saying the same thing to people today, the pope said at the Mass, “because we’re all marked by death” and sin. “All of us have some areas, some parts of our hearts that are not alive, that are a little dead and other people have a lot of their heart that’s dead — a real spiritual necrosis!” 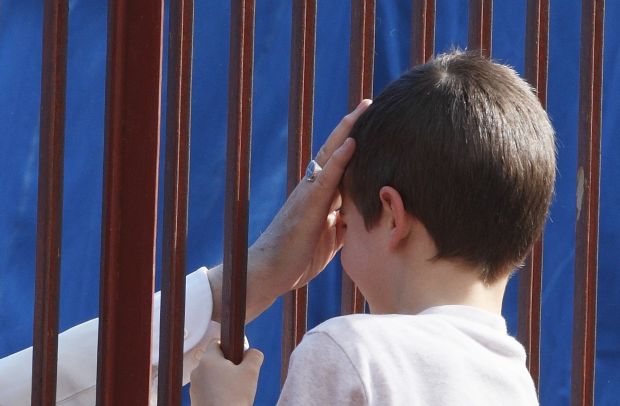 Pope Francis blesses a boy through a fence as he greet the crowd outside the Church of St. Gregory the Great in Rome April 6. (CNS photo/Paul Haring)

The parts of a person’s heart that have died have become “tombs of sin,” he said, and some people become trapped inside, either because they are afraid or embarrassed to come out or they have become “attached” to their sin and corrupted.

The pope asked people to think about what part of their hearts have died, that have become a dark tomb, and then listen to Jesus calling, like he called Lazarus: “Come out!”

“Christ doesn’t give up in front of the tombs we have built by our choosing evil and death, by our mistakes, our sins,” the pope said. Jesus “calls us incessantly to get out of the darkness of the prison we’ve locked ourselves into by making do with a false, egotistical, mediocre life.”

“‘Come out!’ is a beautiful invitation to true freedom,” he said.

“Our resurrection begins here, when we decide to obey Jesus’ command, to come out into the light, to life,” he said.

Just as Jesus asked that the burial cloths that were wrapped around Lazarus’ hands, feet and face be untied, so Christians today need to uncover their true selves.

“Many times we are masked by sin; the masks must fall and we will rediscover the courage of our original face,” created in the image of God. 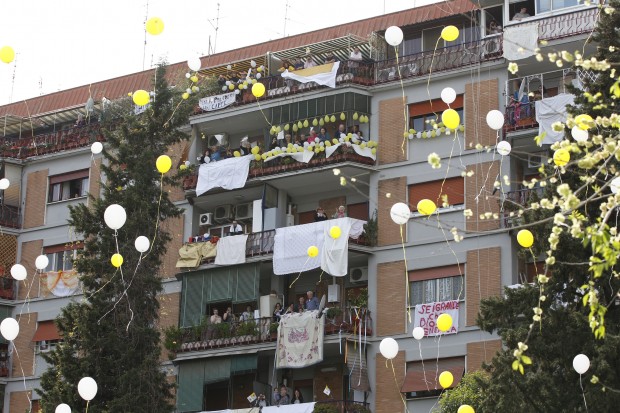 People watch from their balconies as balloons are released during Pope Francis’ visit to the Church of St. Gregory the Great in Rome April 6. (CNS photo/Paul Haring)

There is no limit to how much love and mercy God offers to everyone, he said.

At the parish visit and during the Angelus address, Pope Francis told everyone he was giving them — as a gift — a pocket-sized edition of the Gospels.

He said he knows he tells people to carry the word of God with them all the time so they can read it often and every day. But he said he got the idea of giving copies away after “I recalled an ancient tradition in the church of giving catechumens the Gospel during Lent.”

Thanks to digital media, the pope said people can have the entire Bible on their cell phone or tablet. What’s important is even with “so many technological tools” available, that people read the word of God in all its forms.

He told people that when they to read the Gospels they should remember that “it’s Jesus that is speaking to you in there!”

He said if people felt badly for taking something from him for free, then in exchange for the gift, they could help someone in need, do something charitable and loving for someone or pray for their enemies.

The book’s compact size is so people can always carry it with them to read “when I have to stand in line or when I’m on the bus; but when I’m comfortable on the bus,” when sitting or when it’s not crowded, “because if I’m not comfortable I have to keep an eye on my pockets!”

NEXT: Praying Lent: Tuesday of the Fifth Week of Lent