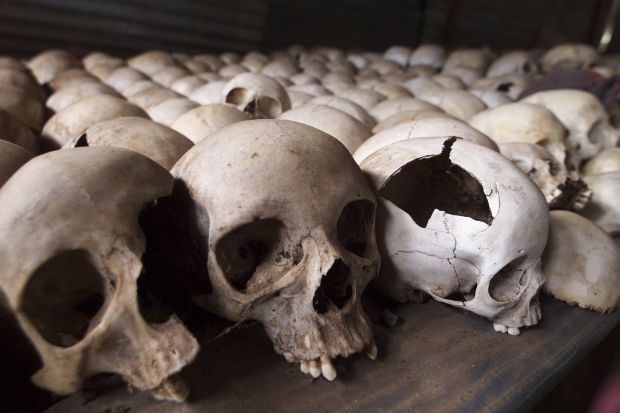 Shelves of skulls are seen in 2002 at the Ntarama Genocide Memorial in Rwanda. (CNS photo/Antony Njuguna, Reuters)

UPDATED – VATICAN CITY (CNS) — Just days before Rwanda was to begin a weeklong period of official mourning to mark the 20th anniversary of its genocide, Pope Francis urged the country’s bishops to be resolute in continuing the work of healing and reconciliation.

“Twenty years after those tragic events,” when as many as 1 million people were murdered in savage acts of ethnic violence, Pope Francis said, “reconciliation and the healing of wounds must remain the priority of the church in Rwanda.”

Meeting the country’s bishops April 3 during their “ad limina” visits to the Vatican, the pope offered his prayers for all Rwandans “without distinction of religion, ethnicity or politics.”

Forgiveness for what happened and “authentic reconciliation can seem impossible from a human point of view,” the pope said, but they are gifts people can “receive from Christ through a life of faith and prayer.”

“The path is long and requires patience, mutual respect and dialogue,” he said.

Rwandans began an official week of mourning April 7 to mark the anniversary of the genocide, in which mostly Tutsis and some moderate Hutus, ethnic groups with a history of rivalry, were killed. Some massacres took place in churches; in some cases, entire congregations were murdered. Leaders of various Christian churches, including the Catholic Church, were implicated in the violence because of ties to one or the other ethnic group. 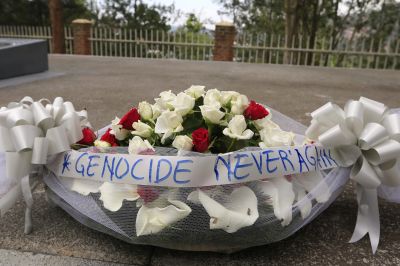 A bouquet of flowers tied with a ribbon showing the message “Genocide Never Again” is pictured at the Kigali Genocide Memorial grounds as the country prepares to commemorate the 20th anniversary of the 1994 Rwandan Genocide. (CNS photo/Noor Khami, Reuters)

Pope Francis said the schools and hospitals the Catholic Church operates in Rwanda have an essential role to play in ensuring a future of peace in the country, but nothing they do can be as effective as Catholics being united in love and allowing “the Gospel to touch and convert their hearts.”

“It is important that, overcoming prejudice and ethnic divisions, the church speaks with one voice, demonstrating its unity,” Pope Francis told the bishops.

Pope Francis also encouraged the bishops to do everything possible to strengthen “relationships of trust between the church and state,” saying that, too, would contribute to reconciliation in the country. “A constructive and authentic dialogue with the authorities can favor common works of reconciliation and the reconstruction of society based on the values of human dignity, justice and peace.”

The pope also encouraged Rwanda’s Catholics to entrust themselves to the maternal care of Mary, who appeared to three young Rwandan girls in the 1980s at Kibeho.

“The mother of Jesus wanted to show herself to your country’s children, reminding them of the effectiveness of fasting and prayer, especially the rosary,” Pope Francis said. “It is my ardent hope that you can make the shrine of Kibeho once again radiate the love of Mary for her children, especially the poorest and those who are wounded.”

Reciting the Angelus with a crowd gathered in St. Peter’s Square April 6, Pope Francis asked all Rwandans to continue the reconciliation process.

“To all of you I say: Do not be afraid,” the pope said. “Build your society on the rock of the Gospel with love and harmony because that is the only way to generate lasting peace.”

Pope Francis asked those gathered in St. Peter’s Square to pray with him to Our Lady of Kibeho and led the crowd in reciting the Hail Mary for the people of Rwanda.

PREVIOUS: Pope to the young: Discover what you hold dear to your heart