Pope to the young: Discover what you hold dear to your heart 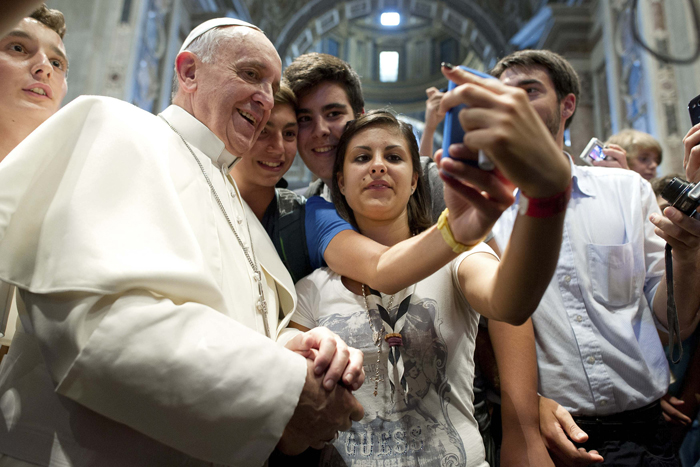 Pope Francis poses with youths during a meeting with young people from the northern Italian diocese of Piacenza-Bobbio in St. Peter's Basilica at the Vatican Aug. 28, 2013. (CNS file photo/L'Osservatore Romano)

VATICAN CITY (CNS) — Pope Francis told a group of young people to be honest with themselves and others and figure out what they hold dear: money and pride or the desire to do good.

He also told them he has made plenty of mistakes in life, being guilty of being too bossy and stubborn.

“They say mankind is the only animal that falls in the same well twice,” he said.

While mistakes are the “great teachers” in life, “I think there are some I haven’t learned because I’m hardheaded,” he said, rapping his knuckles on his wooden desk and laughing. “It’s not easy learning, but I learned from many mistakes, and this has done me good.”

The pope spoke to six young students and reporters from Belgium, who were accompanied by Bishop Lucas Van Looy of Ghent. They video-recorded the interview in the papal study of the Vatican’s Apostolic Palace March 31 and aired an edited version on Belgian TV April 3. The young Belgians, including the cameraman, asked their questions in English, and the pope answered in Italian.

The Vatican released a written transcript of the full interview April 5.

When asked why the pope agreed to do the interview with them, the pope said because he sensed they had a feeling of “apprehension” or unease about life and “I think it is my duty to serve young people,” to listen to and help guide their anxiety, which is “like a seed that grows and in time bears fruit.”

One woman told the pope she does not believe in God, and asked what message he would give to the whole world. “Find a way to speak with authenticity,” the pope said, which involves speaking to others as our brothers and sisters.

The 25-year-old reporter operating the camera asked the pope whether he was happy and why, given that everyone in the world is trying to find joy.

“Absolutely,” he smiled, “absolutely, I am happy.”

“I have a certain inner peace, a great peace and happiness that come with age, too.” Even though he has always encountered problems in his life, he said, “this happiness does not disappear when there are problems.”

When one young woman said: “I have my fears. What makes you afraid?” The pope laughed and responded, “Myself.”

He said the reason Jesus constantly says, “Be not afraid,” is because “he knows that fear is something, that I would say is, quote, unquote, ‘normal.’

“We are afraid of life, of challenges, we are even afraid before God, right?”

Everyone is afraid, so the real issue is to figure out the difference between “good fear and bad fear. Good fear is prudence,” being careful and “bad fear” is something that “cancels you out, turns you into nothing,” preventing the person from doing anything, and that kind of fear must be “thrown out.”

The interpreter clarified that the woman was specifically looking for a way to face her fear of evangelizing, especially in such a secular culture.

“If you go with your faith with a banner, like the Crusades, and you go and proselytize, that’s not good,” the pope said.

Instead, “Give witness with simplicity” and humility, show people who you are “without triumphalism.” “This isn’t scary. Don’t go on the Crusades,” he added.

One young man asked what mistakes the pope has learned from. The pope laughed, saying, “I’ve made mistakes, I still make mistakes.”

The example he highlighted was when he was elected superior of the Jesuit province of Argentina and Uruguay at the age of 36. “I was very young,” he said, “I was too authoritarian.”

But with time, he said, he learned that it’s important to truly listen to what other people think and to dialogue with them.

It took a while to find a happy medium between being too hard and too lax, “but I still make mistakes, you know?” he said.

When asked why he focused so much on the poor, the pope said it’s because people who are marginalized or in need of salvation make up “the heart of the Gospel. I am a believer, I believe in God, I believe in Jesus Christ and in his Gospel.”

He said he knows his preference for the poor led someone to claim, “‘This pope is a communist.’ No. This is the banner of the Gospel, not of communism;” all people have to do is read the Gospels and see how Christ put the poor at the center of his ministry, he said.

One woman told the pope she does not believe in God, but “your acts and ideas inspire me.” She asked what kind of message he would give to the whole world — believers and nonbelievers alike.

The important thing, Pope Francis said, is to “find a way to speak with authenticity,” which involves seeing and speaking to others as our brothers and sisters.

Responding to the cameraman’s doubts about whether the human race is truly capable of caring for the world and each other, the pope said, he, too, asks: Where is mankind and where is God in the world today?

“When man finds himself, he seeks God. Perhaps he can’t find him, but he goes along a path of honesty, searching for the truth, for the path of goodness, the path of beauty.”

“It’s a long road. Some people don’t find him during their lifetime” or they’re not aware that they have found him.

“For me, a young person who loves the truth and seeks it, loves goodness and is good, is a good person and looks for and loves beauty, he or she is on a good road and will find God for sure!”

An authentic, honest and mature person is capable of having “an encounter with God, which is always a grace” and a gift.

When his guests said they were ready to ask the last question, the pope laughed, “Ah, the last! The last is always terrible.”

They asked the pope to pose a question for them.

He said his question came from the Gospel, when Jesus says to not store up treasure on earth, but in heaven, “For where your treasure is, there also will your heart be.”

The pope asked them: What do you treasure and hold close to your hearts?

Is it “power, money, pride or goodness, beauty, the desire to do good?” It can be many things, he said, and he asked them to find the answer “for yourselves, alone, at home.”

NEXT: On 20th anniversary of Rwandan genocide, pope urges reconciliation