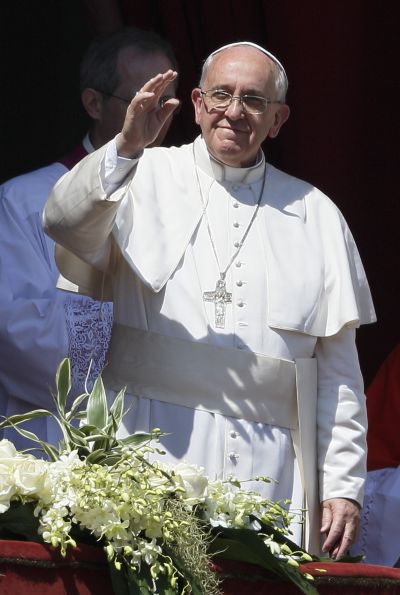 Pope Francis greets the crowd after delivering his Easter blessing “urbi et orbi” (to the city and the world) from the central balcony of St. Peter’s Basilica at the Vatican April 20. (CNS photo/Paul Haring)

Shortly before Christmas, Pope Francis had toured the hospital, which was founded in 1869 and has been owned by the Vatican since 1924. Romans call it “the pope’s hospital.”

Archbishop Konrad Krajewski, the papal almoner, and Msgr. Diego Ravelli, from the office of papal charities, offered 100 homeless people in the city an Easter card signed by Pope Francis in an envelope that included an undisclosed gift of financial aid, reportedly of 40 euros ($55) or 50 euros ($69).

A similar card and money also were given to 30 women living at the Casa Dono di Maria in the Vatican, a shelter run by the Missionaries of Charity, the order founded by Blessed Teresa of Kolkata.

Archbishop Krajewski told an Italian reporter that some of the homeless men he had met April 18 while distributing the papal gifts were already preparing cardboard beds for the night outdoors. On opening the envelopes, “They began to dance with joy and to thank the Lord,” he related.

At Christmas, the pope had given homeless people in Rome phone cards and bus and subway tickets.

Two years ago, an Italian chocolate maker had donated a gigantic, 550-pound chocolate Easter egg to Pope Benedict XVI, which he in turn donated to a juvenile detention center in Rome.

NEXT: In Holy Land, it’s ‘I am Christian’; denominations aren’t so important