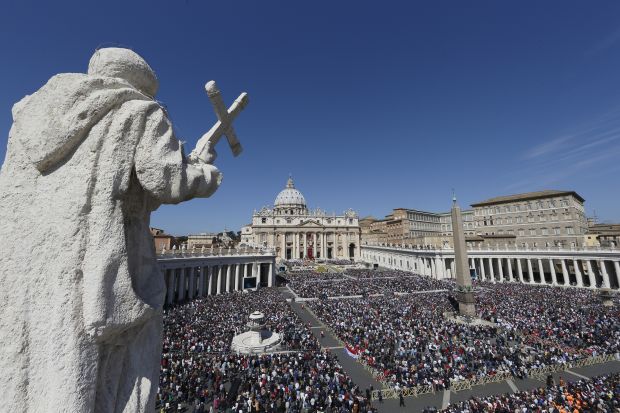 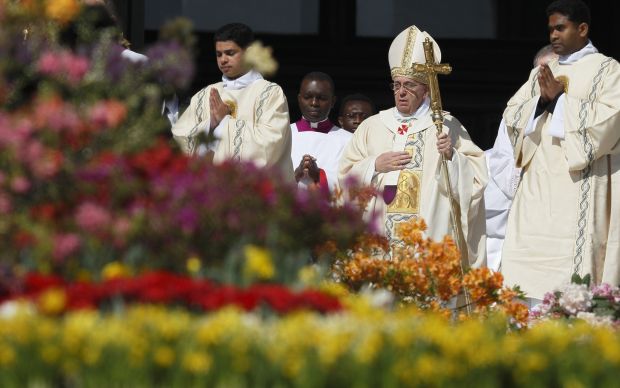 VATICAN CITY (CNS) — Pope Francis urged Christians to remember how they first encountered Christ and to share his love and mercy with others, especially through acts of caring and sharing.

Proclaiming the good news of Jesus’ resurrection means giving concrete witness “to unconditional and faithful love,” he said April 20 before solemnly giving his blessing “urbi et orbi” (to the city and the world).

(See the pope’s full message, in English, Spanish and five other languages, here.)

Celebrating the second Easter of his pontificate, the pope told at least 150,000 people gathered in St. Peter’s Square and on adjacent streets that evangelization “is about leaving ourselves behind and encountering others, being close to those crushed by life’s troubles, sharing with the needy, standing at the side of the sick, elderly and the outcast.”

Whatever is going on in one’s life, he said from the central balcony of St. Peter’s Basilica, Jesus’ victory over sin and death demonstrates that “love is more powerful, love gives life, love makes hope blossom in the wilderness.”

Overlooking the square where he had just celebrated Easter morning Mass surrounded by hundreds of flowering trees and bushes and thousands of daffodils, tulips and roses, Pope Francis said Christians proclaim to the world that “Jesus, love incarnate, died on the cross for our sins, but God the father raised him and made him the Lord of life and death.”

In his Easter message, the pope prayed that the risen Lord would “help us to overcome the scourge of hunger, aggravated by conflicts and by the immense wastefulness for which we are often responsible.” He also prayed that Christians would be given the strength “to protect the vulnerable, especially children, women and the elderly, who are at times exploited and abandoned.” 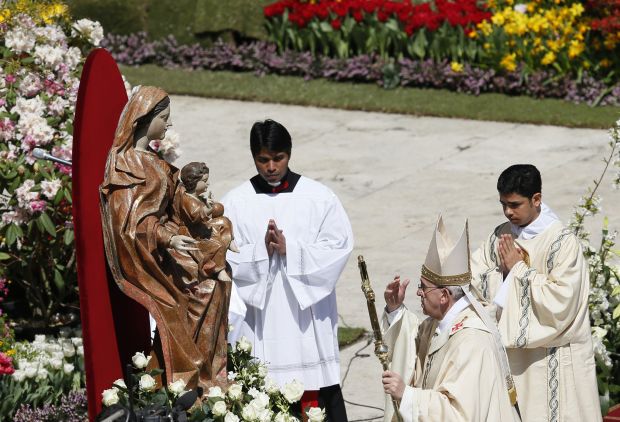 Pope Francis makes the sign of the cross after praying in front of a statue of Mary at the conclusion of Easter Mass in St. Peter’s Square at the Vatican April 20. (CNS photo/Paul Haring)

The pope offered special prayers for those facing serious difficulties and threats in various parts of the world: for victims of the Ebola epidemic in West Africa; the victims of kidnapping; migrants and refugees; and for the victims of war and conflict in Syria, Iraq, Central African Republic, Nigeria, South Sudan and Venezuela.

Celebrating the fact that in 2014 Easter fell on the same day on the Gregorian calendar used in the West and on the Julian calendar used by many Orthodox and Eastern Catholics, the pope’s Easter morning Mass included a Byzantine choir singing “stichi” and “stichira,” hymns that in ancient times were sung in the presence of the bishop of Rome on Easter.

In his “urbi et orbi” message, the pope offered special prayers for peace in Ukraine, a country with various Orthodox, Eastern Catholic and Latin-rite Catholic communities. The pope prayed that all sides in the current political tensions would avoid violence and, “in a spirit of unity and dialogue, chart a path for the country’s future.”

The pope’s celebration of Easter got underway the night before in a packed St. Peter’s Basilica.

His Easter Vigil began with the lighting of the fire and Easter candle in the atrium of the basilica; walking behind the Easter candle and carrying a candle of his own, Pope Francis entered the darkened basilica. In the silence and solemnity of the moment, very few pilgrims and tourists disturbed the atmosphere with their camera flashes.

Brian Baker, a deacon and seminarian from the Archdiocese of Atlanta, sang the Exultet — the poetic hymn of praise calling the whole world to rejoice at the resurrection of Christ.

As the bells of St. Peter’s pealed the joy of the Resurrection through the night, torrential rains beat down on Rome.

In his homily Pope Francis, who often tells people to look up the date of their baptism and commemorate it each year, urged people to remember and reflect on the first moment they really recall having encountered Jesus.

Referring to the Easter account from the Gospel of St. Matthew, Pope Francis noted how the women who went to Jesus’ tomb were told first by the angel and then by the risen Lord to await him in Galilee and tell the disciples to go as well.

“After the death of the Master, the disciples had scattered; their faith had been utterly shaken, everything seemed over,” the pope said. Yet they were told to go back to Galilee, the place they first met Jesus.

Returning to Galilee, he said, means re-reading everything — “Jesus’ preaching, his miracles, the new community, the excitement and the defections, even the betrayal — to re-read everything starting from the end, which is a new beginning,” one that begins with Jesus’ “supreme act of love” in dying for humanity’s sin.

Departing repeatedly from his prepared text, Pope Francis kept telling people: “Have no fear. Do not be afraid. Have the courage to open your hearts” to the Lord’s love.

Returning to Galilee, he said, “means treasuring in my heart the living memory” of “the moment when his eyes met mine.”

“Where is my Galilee,” the pope urged people to ask themselves. “Have I forgotten it? Have I gone off on roads and paths which made me forget it?”

Pope Francis encouraged people to ask the Lord’s help in remembering and in telling the Lord, “I want to return there to encounter you and to let myself be embraced by your mercy.”

Pope Francis baptized 10 people at the Easter Vigil; they ranged from a 7-year-old Italian boy to a 58-year-old Vietnamese woman. Four other Italians and one person each from Senegal, Lebanon, France and Belarus also were baptized. As each stepped forward, the pope asked if they wanted to be baptized and waited for their response; he asked one man twice because his response had not been clear. The catechumens bent over the baptismal font and the pope, putting one hand on their heads, used a deep silver shell to pour water over their foreheads.

The pope confirmed the 10 during the liturgy, anointing them with oil and giving each a kiss on the cheek. And, although Pope Francis does not usually distribute Communion at large public Masses, he made an exception for the 10 new Catholics, who received their first Communion during the vigil.

NEXT: Pope sends Easter eggs to sick children, gifts to the homeless