Women recount the stories of healing through intercession of popes 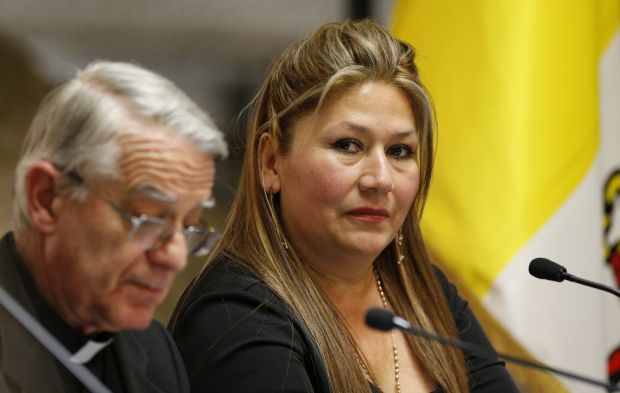 VATICAN CITY (CNS) — People said Floribeth Mora Diaz was crazy to think Blessed John Paul II interceded with God to heal her brain aneurysm, but if so, “then it is a blessed craziness, because I’m healthy,” she told reporters at the Vatican.

The 50-year-old Costa Rican woman spoke at a news conference April 24, just three days before she would participate in the Mass for the canonization of Blessed John Paul; Pope Francis accepted her healing as the miracle needed for the late pope’s canonization.

At the same news conference, Daughter of Charity Sister Adele Labianca gave her eyewitness account of the healing of Sister Caterina Capitani, the nun whose healing in 1966 was accepted as the miracle needed for the beatification of Blessed John XXIII. Pope Francis waived the requirement of another miracle for his canonization.

Even though both women have told their stories hundreds of times, they were emotional before an international gathering of reporters at the Vatican. Sister Labianca said she had to read her testimony from a prepared text because she was certain she would forget something. Mora Diaz simply let her voice tremble.

The Costa Rican woman, who traveled to the Vatican with her husband and four children, told about having a severe headache in April 2011, going to the doctor and being told she had a brain aneurysm. The doctors in Costa Rica said surgery might be able to help, but she would have to go to Mexico or Cuba for the operation, and she did not have the money.

The local doctors could do nothing more for her, so they sent her home, “telling me I had only a month to live.” She began crying as she talked about her husband trying to prepare their children for their mother’s death and urging them to pray.

Mora Diaz said she had long had a devotion to Pope John Paul and watched his beatification May 1, 2011, “and then I fell asleep.” A few hours later, she heard the late pope’s voice, “Rise! … Do not be afraid.” She said, “I had a peace, a peace that assured me I was healed.”

Still, she said, she and her husband did not have the money to pay for more tests to verify the healing, but eventually her doctor did an MRI. “He was shocked,” she said. “My husband wondered why he wasn’t saying anything and I said, ‘because I’ve been healed through the intercession of John Paul II.'”

The doctor’s reaction was important, she said, “because I wasn’t the only one saying I was healed, but there were doctors, who were very serious, saying so.”

Sister Labianca, who spoke about the miracle accepted for Pope John’s beatification, worked in an Italian pediatric hospital with Sister Capitani in 1963 when, for the first time, she had a gastric hemorrhage in the middle of the night. “She panicked and woke me up.”

After months of treatment, doctors removed most of her stomach, which was covered with tumors, and her entire spleen and pancreas. At first she improved, but then she developed an external fistula, which leaked, Sister Labianca said. She was on the point of death May 22, 1966, when the assistant provincial of the Daughters of Charity brought her a relic, reportedly a piece of Pope John’s bed sheet.

“She put it on her wound in the hope that the Lord would come with his mercy and his love,” Sister Labianca said. “Suddenly, Sister Caterina woke from her stupor and no longer felt any pain,” instead she felt a hand on her wound and heard a voice calling, “Sister Caterina!”

“Frightened to hear a man’s voice” in her room, she turned and saw Pope John standing by her bed. He told her she was fine, and she went to tell the other sisters that she was healed and hungry, Sister Labianca said.

With the acceptance of her healing as a miracle, Pope John Paul beatified Pope John in 2001, and Sister Capitani was there. She died in 2010, more than 43 years after she was healed.

NEXT: African churches work to become more self-reliant for funding