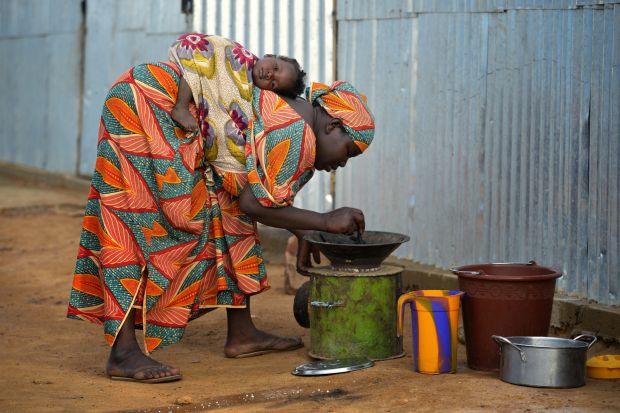 Umu Maiga starts a cooking stove as her 1-month-old daughter, Hosemira, rides along in a camp in Mopti, Mali, in this 2013 photo. Catholic Relief Services provided the camp's families displaced by fighting with supplies, but African countries are trying to become more self-sufficient. (CNS photo/Paul Jeffrey)

In response to church funding cutbacks that started after the 2008 global financial crisis, the Symposium of Episcopal Conferences of Africa and Madagascar has urged its member churches to become self-reliant.

Father Nicholas Afriyie, general secretary of the Ghana Catholic Bishops’ Conference, suggested that African churches set up a fundraising committee to identify and tap resources and opportunities on the continent. He told fellow church leaders at a SECAM meeting in Johannesburg, South Africa, earlier this year that the African church should work harder at self-reliance and not be too dependent on financial resources from foreign partners.

Many parts of the church in Africa “recognize this reality” and are raising funds locally to support their own socio-economic and pastoral programs, said Father Joseph Komakoma, general secretary of SECAM.

Africans give a lot to the church in terms of time, Father Komakoma said in a telephone interview from Accra, Ghana.

“Women, especially, work hard” in the activities of the church, including fundraising, said Father Komakoma, former general secretary of the Zambian bishops’ conference in Lusaka.

“They do many tasks that in other parts of the world would require fees for a consultant to do,” Father Komakoma said, noting that “this work needs to be recognized for its enormous contribution to making the church at different levels self-sufficient.”

While Malawi is a “very poor country, parishioners are very generous,” Father George Buleya, general secretary of the Episcopal Conference of Malawi, said in an April 23 telephone interview from the capital, Lilongwe.

“We certainly can’t do it all ourselves and do ask for overseas support” for projects initiated by Malawian parishes and church organizations, such as building new churches and other infrastructure, he said.

“When projects are home-bred and draw mostly on our own resources, they are more often successful than when they are brought in from outside,” Father Buleya said.

Many major agricultural and irrigation projects that relied on overseas church funding have been scaled down as funds have dried up, he said.

Daniela Frank, executive director of the Germany-based Catholic media council CAMECO, told Catholic News Service that almost all Catholic funding agencies give priority to Africa. This includes agencies with pastoral orientation as well as those focusing on development and human rights, she said.

Subsidies for Catholic programs on the continent amount to many millions of dollars per year, Frank said, noting that in 2012 “Missio Aachen, the biggest pastoral agency in Germany, alone granted … more than 28 million euros for Africa.”

Father Komakoma said the “tremendous growth of the church in Africa, along with multiplied needs, means that while the support from overseas has, in many cases, stayed the same, it has to be spread further.”

For example, overseas Catholic funding that 30 years ago would have helped support 200 dioceses in Africa now needs to be divided among 600 dioceses, he said.

The church in Africa has “come of age” and “cannot be eternally dependent” on funding from its sister churches, Father Komakoma said.

At the parish and diocesan level, self-sufficiency is taking root in many places, he said, noting that seminaries often have strong local support.

“For example, you’ll find women dropping off bags of rice at the local seminary, which is a big help,” Father Komakoma said.

At the diocesan level, “many dioceses provide material support to their sister dioceses with fewer resources,” he said.

He said one advantage to the loss of overseas funding is that the energies that went into a project’s bureaucracy can “now go directly into caring for the poor and the sick.”

Until apartheid ended 20 years ago, the church and its projects in South Africa “were heavily funded by all the big Catholic aid agencies,” and this has steadily dwindled with the perception that other African countries have greater needs, Bishop Dowling said.

“We are considered able to take care of ourselves because we are a middle-income country,” he said.

A South African “mindset that funding comes from Europe” can be linked to the history of church hierarchy and religious orders being of European origin, Bishop Dowling said, noting that the increasing number of indigenous appointments has changed the funding situation.

Without personal links overseas, African church leaders are unable to get the funding found by their predecessors, yet the “perception that there is plenty of funding to be found overseas” remains in the minds of many Catholics, he said.

Rural dioceses in South Africa “struggle more than their urban counterparts in being self-sustaining, largely because young people move to cities to try to earn a living as soon as they can,” Bishop Dowling said.

In his diocese, this migration to cities is largely into slums around Rustenburg’s platinum mines, he said.

“It’s difficult to persuade donors that we have such a poverty problem,” Bishop Dowling said, noting that “the influx of economic migrants into South Africa has exacerbated our poverty crisis.”

PREVIOUS: Women recount the stories of healing through intercession of popes

NEXT: Pope: Church, evangelizing are impossible without joy of knowing Christ