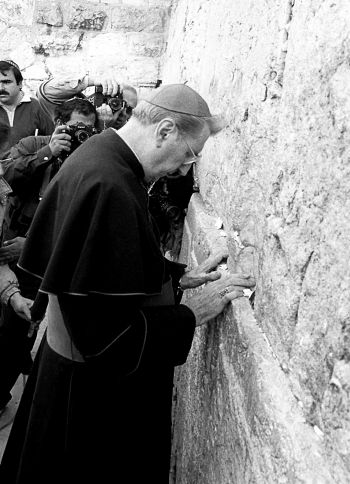 NEW YORK (CNS) — Cardinal John J. O’Connor, who as archbishop of New York cultivated and cherished his strong ties with the Jewish community, was born of a mother who was born Jewish.

It is not known whether he knew that his mother, Dorothy Gumple O’Connor, was born Jewish. She converted to Catholicism before she met and married Thomas O’Connor, the late cardinal’s father.

Mary O’Connor Ward, the cardinal’s sister, told Catholic New York, newspaper of the New York Archdiocese, that her mother never spoke about having belonged to another faith.

The fact that Dorothy O’Connor was Jewish by birth came to light during a genealogical search undertaken by Ward at the prompting of one of her daughters, Eileen Ward Christian, who had begun digging into the family’s history. Ward said that when she was growing up, she surmised that her mother was a convert, but that the family never discussed the matter.

Asked whether Cardinal O’Connor was aware of his Jewish lineage, she said, “I have no way of knowing that.” But she added, “I just don’t understand, if he knew, why something wouldn’t have come up before. He was so close to the Jewish community.”

Musing about his probable reaction to the news, she said, “I think he would have been very proud of it.” Ward added that she was proud when she discovered her Jewish ancestry, and she noted that Cardinal O’Connor often spoke of the Jewish people as “our elder brothers” in faith.

Cardinal O’Connor apparently felt that connection in ways that, in retrospect, seem prophetic. On May 3, 1987, he watched thousands of people march down Fifth Avenue protesting the oppression of Soviet Jews. Later, he joined the protesters at a rally near the United Nations and told them, “As I stood on the steps of St. Patrick’s Cathedral this morning and watched you stream by, I could only be proud of those who streamed out of Egypt several thousand years ago, winning freedom for themselves and for all of us. They are your ancestors and they are mine.”

At a synagogue service in 1988 commemorating the 50th anniversary of Kristallnacht, when Nazis destroyed synagogues and Jewish homes and stores in Germany and Austria, the cardinal told the congregation that he had placed a candle in the window of his residence on Madison Avenue. “That candle says, to those who would accuse, ‘Paint your swastika on the walls of my house, because herein lives a spiritual Semite,'” he said.

Mother Agnes Mary Donovan, superior general of the Sisters of Life, the religious congregation Cardinal O’Connor founded in 1991, was joyous about the news of the cardinal’s heritage. In an interview, Mother Agnes spoke about the cardinal’s 1977 visit to the World War II-era Dachau concentration camp, which profoundly affected the rest of his life.

Mother Agnes said the sisters in the congregation were moved by the news of their founder’s Jewish heritage.

“It leaves us with a greater wonder and awe at the magnificence of God’s grace, at the gift of a charism of life given to a priest … who did not know that he was Jewish, a gift of grace given by God in one of the 20th century’s darkest places,” she said.

Cardinal O’Connor was the archbishop of New York from his appointment by Pope John Paul II in 1984 until his death at age 80 on May 3, 2000. His relationship with the Jewish community in New York was strong from the beginning and it was rooted in actions as well as words. The cardinal was one of the key movers behind the Vatican’s diplomatic recognition of Israel, which was formalized with the opening of a Vatican nunciature in Israel and an Israeli embassy at the Vatican in 1994. History shows he was a vocal supporter of Jews and Jewish causes, and he often spoke before Jewish groups and organizations. But to many Jews in New York, he was more than a leader in the field of interfaith affairs; he was a friend.

Additional research led Ward and her daughter to the archives of the Archdiocese of Philadelphia, where the marriage record for Dorothy and Thomas O’Connor revealed that Dorothy Gumple had been baptized at Sacred Heart Church in Bridgeport, Conn., April 3, 1908. She was 19 at the time.

“What brought it about, I’ll never know,” Ward said. “None of us will ever know why she became a Catholic.”

Later, Dorothy Gumple went to Atlantic City where her sister lived, and through her sister’s husband, she met Thomas O’Connor. They married Dec. 26, 1909.

“I just drew my own conclusion that my mother was a convert. The only way I knew (was that) she had a sister who didn’t go to church,” Ward explained, adding that she and her brother, the future cardinal, were “very close” but did not discuss their mother’s religious background.

Ward reaffirmed what her brother had often said: Their mother was a deeply devout Catholic, a woman of prayer who literally died while sitting in a chair and saying the rosary.

She added that her brother might have thought that their mother was originally Lutheran, because her parents, Tina and Gustav Gumple, came to the United States from Prussia.

There is some support for that theory. Sister Maris Stella Karalekas of the Sisters of Life has been researching the life of Cardinal O’Connor for several years. She spoke with a Lutheran pastor and former U.S. Navy chaplain, the Rev. George Evans. He told her that the future Cardinal O’Connor, when he was chief of Navy chaplains, told him, “If things had turned out differently, I could have been Lutheran. My mother was born Lutheran.”

Sister Maris Stella is convinced that Cardinal O’Connor did not know that his mother was born Jewish.

“If he did know, he would have been so proud of it,” she said.

“It’s quite a wonder to me. It’s something so beautiful, that God chose him as this instrument of grace in the church.”

McDonnell is a freelance writer for Catholic New York, newspaper of the New York Archdiocese.

NEXT: Deportations bring a bitter rift among immigration reform advocates