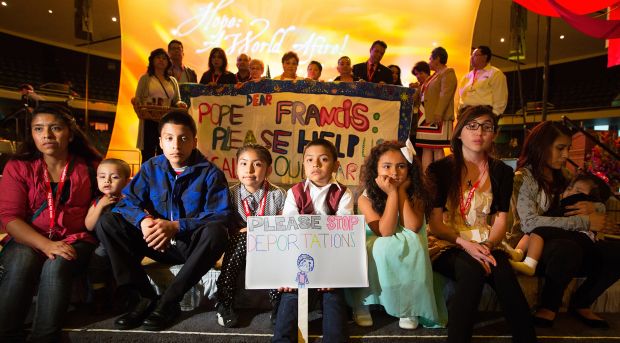 WASHINGTON (CNS) — The united front of President Barack Obama and advocates for comprehensive immigration reform has tarnished and taken on an increasingly bitter tinge over deportations.

Building on huge increases in U.S. Border Patrol resources that began in the George W. Bush administration, Obama’s Department of Homeland Security and Justice Department ramped up deportations, in part to try to build support for comprehensive reform among politicians who demand tougher enforcement as the price of their votes.

An analysis of deportation trends released April 30 by the Migration Policy Institute said that because of a combination of a 1996 law requiring tougher immigration enforcement and changes in policy, procedures and funding, the number of people deported annually has soared in the past 20 years. Also dramatically higher is the number of people who are deported under more formal legal removals, which carry longer-term repercussions and sometimes criminal implications.

Marc R. Rosenblum, deputy director of MPI’s immigration policy program and one of the study’s authors, said during a teleconference where the report was released that “it’s clear that the law is being enforced” and that enforcement has increased in scope and intensity, especially in the last five years, using “any metrics you want to look at.”

He added that this is true even though fewer people are being apprehended near the Mexican border, because fewer people are trying to cross, apparently. Analysts suggest that may be because of increased enforcement as well as the weaker U.S. economy of recent years.

“The evidence is pretty compelling that enforcement has been pretty effective,” Rosenblum said.

The political effect so far, however, is that although deportations are at record levels and illegal border crossing numbers are down, there’s no hint that the recalcitrant, largely Republican opposition to comprehensive reform has budged a bit. Meanwhile, public outcry has ramped up along with the deportations, as activists focus on families being broken apart and some immigrants losing the chance to ever get legal status.

A May 1 protest at Lafayette Park, across the street from the White House, drew hundreds of people carrying signs and chanting “not one more” and other slogans focused on stopping deportations of people with strong family and community ties in the United States and no criminal records. Several people were voluntarily arrested for civil disobedience.

Similar actions, focused on a range of immigration-related topics, took place around the country, drawing thousands in several cities.

A day earlier, at least 20 anti-deportation activists were arrested when they sat down in a street outside the Capitol, blocking traffic. Similar actions have been taking place around the country.

Sheena Wadhawan, manager of the legal program at CASA de Maryland, told Catholic News Service of several clients whose deportation orders seem to fly in the face of Obama’s statement that his administration is going after: “criminals, gang bangers, people who are hurting the community, not after students, not after folks who are here just because they’re trying to figure out how to feed their families.”

CASA de Maryland is a social services agency aiding people throughout Maryland, Virginia and Washington. Wadhawan said the legal services division takes on about one “last resort” case of pending deportation a week. She described those cases as “basically, there’s nothing else to be done but begging the administration to exercise discretion.”

One such client, Virginia resident Catia Paz Alvarez, was being put forward as an example at the May 1 rally. Paz arrived in the U.S. at age 17 from El Salvador. She graduated from high school in the U.S., married, bought a house and has two children, ages 3 and 5, both of whom are U.S. citizens. She works in a department store and is active in her church, said Wadhawan.

Paz was twice approved for a stay of deportation, but this year her application was denied.

“We’re really worried” that she may be ordered to leave any day, Wadhawan said. The attorney said the denial of Paz’s stay application gave no reason for the change in approach for a long-term resident, with no criminal record and who has citizen children, relatives and an employer who would be hurt by her absence.

“The government says that since 2011 they have not been deporting anyone except criminals,” Wadhawan said. “They are lying.”

If Paz had left El Salvador a little more than a year earlier and arrived in the U.S. before turning 16, she would have been eligible for DACA, Deferred Action for Childhood Arrivals, the administration program introduced two years ago, through which young people can seek deferral of deportation.

Obama in March instructed Homeland Security Director Jeh Johnson to “do an inventory” of current deportation practices and “see how it can conduct enforcement more humanely within the confines of the law,” as the White House described the request.

In a March 26 letter to Johnson, Bishop Elizondo said the bishops will continue to press for comprehensive reform legislation, but in the meantime “we are deeply troubled by the division of families caused by current immigration enforcement policies.”

He went on to urge the adoption of several changes, including the use of more discretion in who the agency prosecutes for deportation; the end of procedures such as “expedited removal” which are not subject to judicial review and were used in more than 75 percent of removals in 2013. He also asked Johnson to end Operation Streamline, “which places criminal penalties on migrants who have crossed the border. … We find this program in violation of basic due process rights. It also fails to deter migrants desperate to support their families and can be considered a waste of precious federal resources that should be targeted toward the prosecution of drug traffickers, human traffickers, and smugglers.”

Bishop Elizondo also asked Johnson to ensure that people who are deported are not left in dangerous situations, and asked for an expansion of alternatives to detention and “know your rights” presentations for people who are subject to deportation.