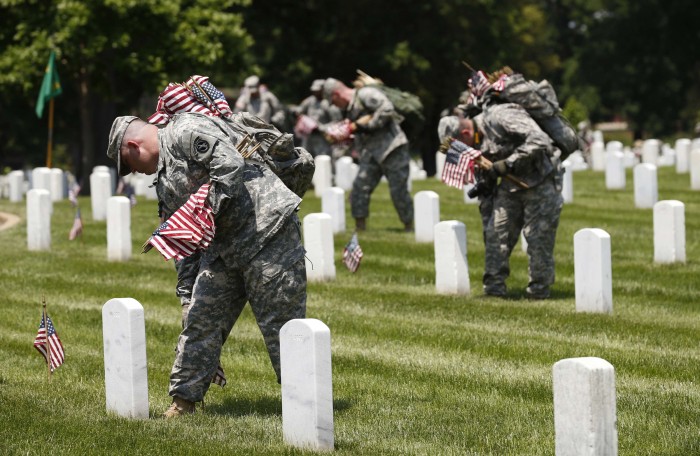 Members of the Third U.S. Infantry Regiment take part in a "Flags-In" ceremony May 22, ahead of Memorial Day, at Arlington National Cemetery near Washington. The soldiers placed American flags in front of more than 220,000 graves. (CNS photo/Kevin Lamarque, Reuters)

The holiday — created in 1868 by an organization of Union veterans — was initially called Decoration Day and meant as a time for Americans to put flowers on the graves of those killed in the Civil War.

Today, those who lost their lives in military service are remembered in both large-scale events and simple tributes across the country and in Washington in particular. At least 900,000 motorcycle riders were expected to take part in the Rolling Thunder rally in Washington May 25 to pay tribute to POWS and MIAs from the Vietnam War, and thousands planned to attend ceremonies May 26 at Arlington National Cemetery — the burial ground for U.S. soldiers from the Civil War up to recent conflicts in Iraq and Afghanistan.

And just a few miles from the major war memorials, two Vietnam veterans at the U.S. Soldiers’ and Airmen’s Home, planned to mark the holiday without any fanfare.

Ken Faller, retired master chief engineman with the U.S. Navy, said he thinks about the shipmates who served with him and remembers those who died but he doesn’t “dwell on it.”

He joined the Navy at age 17 and spent 23 years there, mostly on submarines and serving two tours in the Vietnam War, first on riverboats preventing the transfer of weapons between the North Vietnamese troops and then as a Navy adviser.

“I cannot get myself to see” the Vietnam Veterans Memorial, he told Catholic News Service May 20, the day before his 74th birthday.

“I don’t care to. I don’t want to do it,” he said matter-of-factly. He acknowledged that many others not only visit the monument but also touch some of the names of the 58,000 U.S. soldiers carved in the black granite wall symbolizing those who died in the war.

(Watch another video below:)

Faller, raised in Patterson, New Jersey, has visited the city’s other war memorials and says he can’t explain his unwillingness to go to the Vietnam memorial, but he also said without hesitation that he will always remember those who died.

“They’re not forgotten,” he insisted.

Faller has lived in the city’s oasis of 250 acres for retired service men and women for the past five years. More than 500 residents live on the property, which is also home to President Abraham Lincoln’s summer cottage. The property, on a hillside near The Catholic University of America, includes housing for independent living, assisted living and long-term care.

A key part of the property for Faller is its nine-hole golf course where he plays almost daily. 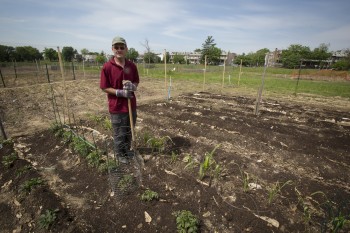 Terry Sawyer, 62, poses for a photo in the garden he tends at the U.S. Soldiers’ and Airmen’s Home in Washington. Sawyer spent two years in Vietnam as a U.S. Army medic, and said he received a medal for keeping a comrade alive by breathing for him for 45 minutes. For Sawyer and others, Memorial Day doesn’t stand out for them, because they always remember fellow soldiers who died in battle. (CNS photo/Tyler Orsburn)

For Terry Sawyer, a 62-year-old Army combat medic during the Vietnam War who just moved to the home two weeks earlier, it’s the garden plots.

“Now I garden,” said Sawyer, showing the rows of tomato, strawberry and corn plants he started, remembering tips his grandfather, a tobacco farmer in North Carolina, showed him when he was a kid. Sawyer also is growing two rows of flowers he hopes to use to “bribe the nurses.”

The fenced-in gardens, to keep out the deer, are surrounded by tall grasses at the edge of the property that bumps up to the city streets. There are a few massive oak trees, some old picnic tables, grills and rusted lawn chairs alongside the garden’s wooden toolshed.

Sawyer, who tends this garden daily, might not doing anything special on Memorial Day, but he has wrestled for decades with the memories of deaths he witnessed firsthand in the Vietnam War. Joining the Army at 18, the former beach lifeguard and high school football and wrestling captain from Norfolk, Virginia, says he “wanted to do something” for his country.

“You don’t realize what you’re getting into until you get over there and see bodies and you say, ‘Man, they are really killing people here.'”

Just last year he said he finally put some closure on this experience by making a 450-mile trek along Appalachian trail from Georgia to Virginia to honor the memory of those who died.

He described the two-month hike during March and April — often on snow-covered trails — as a way to put behind him the horrors he witnessed firsthand of countless burns and gunshot wounds on soldiers crying out, and sometimes dying in his arms, as he tried to get them to medical care.

Although the hike gave him closure, he admits, “I don’t think you can close it totally,” which is why he finds solace now in gardening and being with other service men and women.

Diagnosed with chronic post-traumatic stress disorder, Sawyer said it has taken him a long time to get over what he saw and that during the roughest part of dealing with these memories he “really had to dig deep” into his faith.

“At that point, you really depend on your faith,” he added.

Fuller, who like Sawyer, was raised Catholic, likewise said his faith helped him through several rough spots.

“You could always rely on it,” he said, from a lawn chair at the golf course check-in spot.

“I’ve been in some tight situations and got out of it, so somebody beyond my shipmates took care of it. My faith was never in question, never.”

Father James Dixon, the Catholic chaplain at the Armed Forces Retirement Home for the past seven years, said he encourages those in his pastoral care — whom he describes as men and women who followed a calling of self-sacrifice — to spend time in prayer and reflection.

He joined a group of them May 18 at a Sunday Mass at the Basilica of the National Shrine of the Immaculate Conception in Washington. It was celebrated in honor of Memorial Day celebrated by Archbishop Timothy P. Broglio, head of the U.S. Archdiocese for the Military Services.

In his homily, the archbishop said the annual Memorial Day observance is meant to remember “those who have perished in the service of our country, the veterans and the chaplains who have died.” For people of faith, he said, this remembrance goes a step further and is not just “passive, merely a looking back, or turning the pages of a scrapbook.”

The archbishop said Catholics should continue to pray for those who died and also “offer consolation to those who lost loved ones in the tragic circumstances of war” which he said is “always a defeat, a loss and an unnecessary expenditure of precious resources.”

The Memorial Day Mass celebrated at the national shrine May 18 will be aired on the Eternal Word Television Network Monday, May 26, at 1 p.m. EST and Tuesday, May 27, 12 a.m. EST.

NEXT: Parish reaches out to community after ‘horrific night of violence’