Path to priesthood began with, ‘Could you be a priest?’ 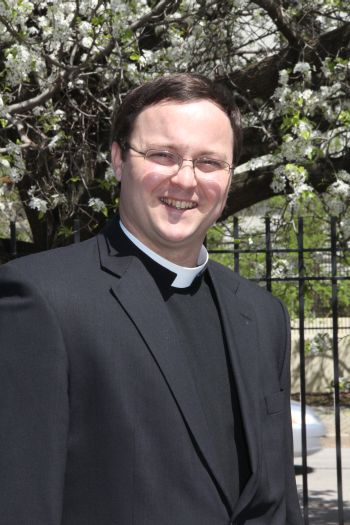 Deacon Sean English wanted to swim entering college. Smart and athletic, he received grant money to attend Lehigh University after graduating from Monsignor Bonner High School in Drexel Hill, where he was a swim captain, in 2003 before it merged with Archbishop Prendergast High School.

The priesthood wasn’t a real option, though the idea lingered in the back of English’s mind. He was always a religious man.

Now English is 28 years old and just weeks shy of ordination to the priesthood for the Archdiocese of Philadelphia. He attended his home parish’s grade school, St. Charles Borromeo in Drexel Hill, where his classmates elected him class president. English’s uncle, Robert Schieler, was a Christian Brother and an inspiration to English at a young age.

Involved in the parish, the English family provided altar servers and readers at Sunday Masses. English recalled his first encounter with the call to priesthood in grade school. Msgr. Daniel Murray, then pastor at St. Charles Borromeo, asked English’s prayer group a question during a lesson.

“Could you be a priest?” Msgr. Murray inquired.

“No one else was moved by it except me,” English said.

Both English’s grandmothers held fond devotions to the Blessed Mother, including his father’s mother who lived in Ireland and prayed to Our Lady of Knock for English to become a priest. Before passing, she told friends in Ireland about her prayer, which she had kept secret.

Leaving Bonner a popular guy after swimming and taking AP classes and courses at Neumann University, he entered Lehigh with 27 credits completed. He focused on swimming and academics at Lehigh, and left the priesthood for a future time. He double majored in psychology and religion studies but wasn’t involved in campus ministry during college. 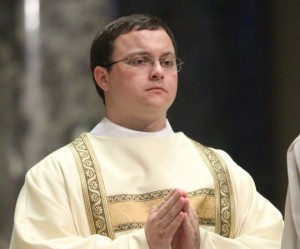 Deacon Sean English serves at a recent Mass at the Cathedral Basilica of SS. Peter and Paul, where he will be ordained a priest May 17. All are welcome to attend the Mass that begins at 10 a.m. (Sarah Webb)

His last year at Lehigh, English emailed Philadelphia’s vocation director, then Father Chris Rogers, after the swimming season. Only days later, though, Lehigh — where he became swim captain — offered him a position as coach.

But English had to apply to a master’s program, and his psychology grades weren’t stellar in college. In June, the rejection letter arrived, and coaching at Lehigh was no longer an option. He returned home and helped coach swimming at his local YMCA in Ridley. The team ultimately went to nationals.

Liam English, one of Sean’s two brothers, said Sean coached at Glenolden Swim Club, whose members attended Sean’s first preaching Mass as a deacon last year. He also worked at a beer distributor, where some family members were employed.

By October at the urging of Msgr. Murray, English visited the seminary. He didn’t tell his parents or siblings about his interest until February. English’s youngest brother, Danny English, said Sean simply showed him the application packet, which previously lay hidden in his room.

Liam said he and his father traveled home from Widener University, where Liam attended, when he heard the news. Originally, the choice surprised him.

“You can tell he made the right decision,” Liam said. “He’s the person you call and confide in. He’s found peace with the priesthood.”

Even if he isn’t proficient at a particular field of knowledge, Sean is the guy to call because of his sound mind, Liam said.

Sean’s entrance into seminary also surprised Danny, who said Sean’s decision was the best of his brother’s young life.

“You can go right up to him and start talking to him,” Danny said about Sean’s amicable demeanor. “He’s the type of guy you want to hang out with.”

Sean received his acceptance letter to St. Charles Seminary in June 2008, one year to the month after Lehigh rejected him from the master’s program.

“After six years, I couldn’t imagine him being anything other than a priest,” Danny said.

PREVIOUS: Confession led man to seminary, and now to cusp of priesthood

NEXT: The calling, the denial, and how the rosary led to priesthood