Arab Christians can serve as a bridge between East, West, observers say 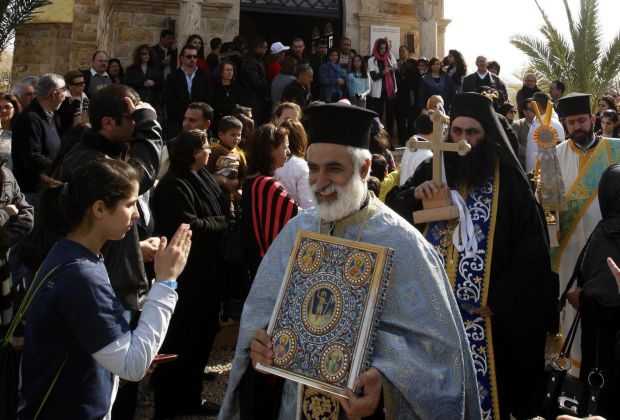 Jordanian clerics walk in a 2013 procession to the site of Jesus' baptism in the Jordan River, which Pope Francis will visit May 24. (CNS photo/Jamal Nasrallah, EPA)

BETHANY BEYOND THE JORDAN, Jordan (CNS) — The significance of where Jesus was believed to be baptized on the banks of the Jordan River beginning his public ministry is not lost on Arab Christians, deeply aware of their rich religious and cultural heritage.

Indeed, their Middle Eastern ancestors are counted among the world’s earliest Christians and the guardians of the faith throughout the ages.

“Arab Christians are very important and their role is even more important,” said Father Nabil Haddad, as he surveyed the lush green scenery of the Baptism Site, which Pope Francis planned to visit May 24, the first day of his pilgrimage to the Holy Land.

The pope is expected to offer words of encouragement to the Christian community, whose numbers in the region are dwindling because of conflict and violence, as well as promote better ties with Muslims.

“(Christians) have to realize the importance of their role and at the same time, their brothers and sisters must give them space to perform that calling,” said Father Haddad, director of the Jordanian Interfaith Coexistence Research Center.

“I have always felt that Eastern Christians are a bridge. They are the best ambassadors for the East to the West. At the same time, they are the best ambassadors of the West to the East. As a bridge, it is a two-way bridge, not a one-way bridge. This is what makes the Arab Christian role very important and very unique,” he told Catholic News Service.

As an Arab Christian, Father Haddad has dedicated much of his life’s work striving for peace, interfaith coexistence and reconciliation in the troubled Middle East.

Christians are among the numerous minority communities that make up the region’s diverse religious landscape. They have faced discrimination, persecution and even death mainly during times of conflict past and present.

The research center was established in 2003, formalizing two decades of work on interfaith collaboration and understanding and building on centuries of cooperation among people of different faith traditions.

In the aftermath of the Arab Spring upheavals that saw longtime rulers toppled in Egypt and other countries and conflict roiling Syria, Father Haddad said Christians must work with their Muslim neighbors to create a “new culture of citizenship,” where each person is respected and has equal rights under the rule of law.

“We need civil societies where there is equality of citizenship. This is very important. This is the best Arab Spring that we can dream of,” he said.

“We need to show our Muslim brothers and sisters that we are unique and that it is important for us to stay in the Middle East,” he added. “So it is important to protect the Christian presence, not only for the Christians themselves, but for Muslims also to present a good witness of religious tolerance.”

But extremism and militancy gaining ascendency in the region coupled with better economic opportunities abroad have siphoned the Christian population from their ancestral home.

Jordan is an overwhelming Sunni Muslim majority country. The number of Christians in Jordan is uncertain. The U.S. State Department’s 2012 Report on International Religious Freedom identifies between 1 and 2 percent of Jordan’s nearly 7 million people as Christian.

“Jordan is a unique country. First, the constitution reserves the rights of all citizens, regardless of religious differences. Second, we have a good, moderate leadership which considers the whole society as one family,” said Father Rifat Bader, spokesman for the Catholic Church in Jordan.

“Christians are very committed to their country and contribute greatly to the good of the society, not just through commerce, but through schools, hospitals and numerous charitable organizations,” said Father Bader, who directs the Catholic Center for Studies and Media in Amman, Jordan’s capital.

Mohammad Momani, Jordan’s minister of state for media affairs and communications, underscored the point during a recent visit to the Baptism Site.

The upcoming papal visit underlines the country’s values while highlighting the stability and security Jordan enjoys in midst of a volatile region, he added.

During a recent visit to Jordan Cardinal Timothy M. Dolan of New York said strengthening support of the Christian community is one way to stop Christians from fleeing the region. He pointed to the work of organizations such as the Catholic Near East Welfare Association, for which he serves as chairman of the board, as vital to ensuring that the presence of Christians remains in the region.

“CNEWA can give a booster shot to the effort it has been doing for decades to support the Christian community in the Middle East,” he said during a break from observing CNEWA’s efforts.

“When you look at what the tiny Christian community is doing in terms of health care, education, feeding the poor, and keeping people together, you can see why Jesus said, ‘By their fruits, you shall know them,'” he told CNS.

“Muslims have come to respect the magnificent and charitable work of the sisters and other Christians. So religious respect, friendship and dialogue is a result of that,” the cardinal said.

“Whenever we can work with the local church, that’s what CNEWA does, accompany the local church to be stronger, to cultivate people’s roots, to make them deeper and join in solidarity of prayer, that’s where we need to be,” he told CNS.

NEXT: Romanian bishop who died in communist prison cell to be beatified