Romanian bishop who died in communist prison cell to be beatified 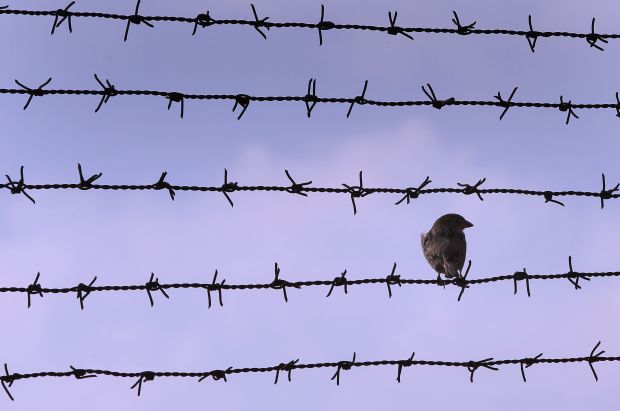 A sparrow rests on a barbed wire fence that surrounds Jilava prison near Bucharest, Romania. Bishop Anton Durcovici, who was secretly ordained under communist rule and died in prison in Romania was to be beatified May 17. (CNS photo/Robert Ghement, EPA)

WARSAW, Poland (CNS) — A Catholic bishop who was starved and forced to stand naked in winter will be beatified as a martyr in Romania, 63 years after dying of malnutrition in a communist prison.

The ceremony honoring Bishop Anton Durcovici, who served as head of the Diocese of Iasi at the time of his death, will take place May 17 in the northeastern Romanian city’s municipal stadium with Cardinal Angelo Amato, prefect of the Congregation for Saints’ Causes, presiding.

“This is a great joy for the whole Catholic church here, and especially for his home-diocese,” said Bishop Petru Gherghel of Iasi.

“But it’s important for Romanian society as a whole, since he’s a figure of resistance, who gave an example to everyone by standing up for truth, dignity and freedom, as well as for devotion to the Christian faith,” the bishop told Catholic News Service May 15.

Bishop Durcovici will be the first martyr from the Iasi Diocese to be declared blessed. Bishop Gherghel said that the end of the lengthy process for canonization would reward and encourage people still engaged in collecting documents and testimonies about communist-era martyrs.

“He was also deeply involved in educating and forming local people, so his fate teaches much about courage and faithfulness to the end,” Bishop Gherghel said.

“Our country produced many such witnesses and martyrs to the faith, who are still with us today — speaking to us in our lives and giving us fortitude to face the future.”

Born May 17, 1888, in Bad Deutsch-Altenberg, Austria, a town on the Danube River, the martyred bishop moved to Romania with his widowed mother and brother as a child, and enrolled at the Iasi seminary in 1906.

He gained degrees in canon law, philosophy and theology and two doctorates while studying at Rome’s Pontifical University of St Thomas Aquinas, or Angelicum and serving with the Vatican’s Congregation for the Evangelization of Peoples. He returned to Romania as a seminary teacher and parish administrator at his ordination in 1910.

Interned during World War I because of his Austrian citizenship, Bishop Durcovici was later freed and became rector of the Catholic seminary in Bucharest in 1924.

In April 1948, he was consecrated bishop of Iasi by the Vatican’s then-apostolic nuncio, Archbishop Gerald P. O’Hara, two years before the U.S.-born diplomat was expelled by Romania’s new communist regime.

Held at the notorious Jilava prison, Bishop Durcovici was transferred with other priests to Sighet prison, where he was tortured and denied food and water and stripped in winter weather.

Bishop Durcovici died of malnutrition in his cell Dec. 10, 1951, and was buried in an unmarked grave by communist officials, who attempted to erase all physical and documentary evidence of his stay in prison.

Witness accounts on the Iasi Diocese website said the bishop received final absolution through his cell door from a priest after calling on other inmates to pray for him.

The accounts reported different dates for the bishop’s death because of the total isolation of fellow prisoners, including Cardinal Iuliu Hossu (1885-1970) and Archbishop Ioan Ploscaru (1911-1998), although news of his deteriorating condition had been leaked by a sympathetic warden.

In a May 1 pastoral letter, Bishop Gherghel described the martyred bishop as a “flower of the local church,” who had carried “the cross of salvation and redemption” through his bitter sufferings.

Meanwhile, the current Vatican nuncio, Archbishop Francisco-Javier Lozano, and Archbishop Ioan Robu of Bucharest, president of the Romanian bishops’ conference, told Austria’s Kathpress agency May 12 that they believed the beatification would assist interchurch ties by recalling shared communist-era sufferings in Romania, 87 percent of whose 23 million inhabitants are nominally Orthodox.

Austrian church leaders, and Catholics from the hometown of Bishop Durcovici are expected to attend the beatification Mass.

PREVIOUS: Arab Christians can serve as a bridge between East, West, observers say

NEXT: Pope cuts meetings because of cold, need to rest before Holy Land trip