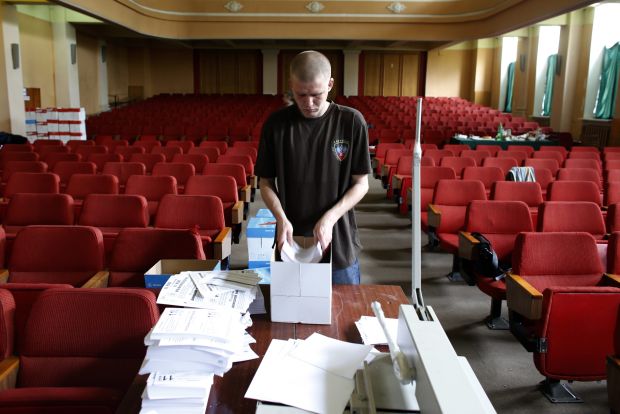 LVIV, Ukraine (CNS) — Ukrainian Catholic bishops said their country’s May 25 presidential election must proceed, despite any efforts to derail it.

Postponement would threaten “the existence of an independent Ukrainian state,” said a May 5 message from the Synod of Bishops, signed by Ukrainian Catholic Archbishop Sviatoslav Shevchuk of Kiev-Halych.

“It’s no secret that many actions in the near future will be aimed at disrupting or postponing the presidential election,” said the bishops. “That is why we need more than ever to unite all healthy social forces and institutions. Everyone who lives in the Ukrainian land and cherishes freedom should protect their own state, as well as their right to live in a free and fair Ukraine.”

The bishops said the vote would “be held in difficult socio-political circumstances … occupation of Crimea, continuing external aggression, an unprecedented information war, sabotage and provocations.” However, they said the election would “determine our children’s future and whether we support the values for which our countrymen in the distant and recent past gave their lives: freedom, justice, dignity and every citizen.”

“We urge our church’s faithful and all Ukrainian citizens to contribute actively to these crucial elections and take part faithfully in them,” the bishops said.

The bishops also asked candidates “to act honestly, transparently and responsibly, not to use loud, empty and deceptive slogans, and offer truthful, practicable and necessary reforms for the moral, social, political and economic renewal of our state. We urge them not to be guided by the interests of foreign states, or by selfish, partisan benefits, but only by the good of their people and care for preserving the independence and integrity of the Ukrainian state.”

The letter was published as pro-Russian activists continued to battle government forces in eastern Ukraine amid attempts to regain buildings and installations in Luhansk, Donetsk and other regions.

In Odessa May 2, 46 people were killed and hundreds injured in clashes between pro-Ukrainian and pro-Russian militants.

In a May 4 pastoral letter to local churches, Bishop Bronislaw Bernacki of Odessa-Simferopol said Odessa had “become a battlefield,” as “aggression mounts and clashes become more frequent.”

The bishop added that the violence “clearly showed forces from outside the city and outside Ukraine stand behind the clashes,” and appealed for Masses to commemorate “all victims, irrespective of which side of the conflict the dead stood on.”

“Looking at those killed and seeing the suffering of the many wounded, I urge all Christians, whatever their denominational affiliation, to a common and unceasing prayer for peace,” the bishop said.

“I also appeal to all political forces in the country and abroad to intensify efforts to ensure peace in Ukraine and halt the escalation of violence. I ask the international community to step up political and economic pressure on those who are backing violence, paying the provocateurs and separatists, and supplying them with weapons.”

Russian President Vladimir Putin said May 7 he was withdrawing Russian forces from the Ukrainian border, and he urged pro-Russian activists to delay a planned May 11 referendum on autonomy.

He added that Ukraine’s presidential election would be a move “in the right direction,” despite previous Russian insistence that conditions were too unstable.