Cardinal: Officials who support abortion should not receive Communion 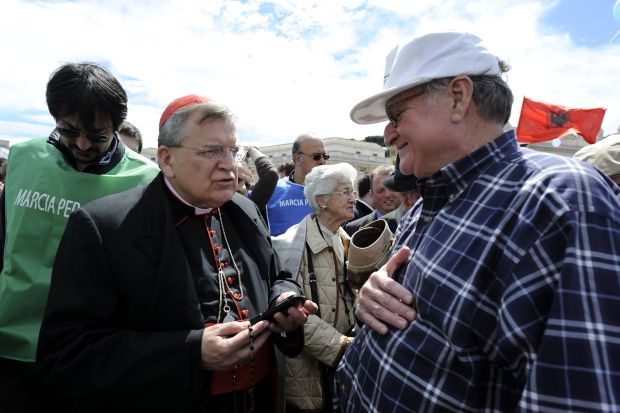 U.S. Cardinal Raymond L. Burke, prefect of the Supreme Court of the Apostolic Signature and a former archbishop of St. Louis, speak to a man during a May 4 pro-life demonstration in St. Peter's Square at the Vatican. (CNS photo/Katarzyna Artymiak)

ROME (CNS) — Catholic politicians and judges who support laws in conflict with church teaching on abortion, euthanasia, marriage and related issues commit “sacrilege” and cause “grave scandal” if they receive Communion, said the U.S. cardinal who heads the Vatican’s highest court.

“The church’s discipline, from the time of St. Paul, has admonished those who obstinately persevere in manifest grave sin not to present themselves for Holy Communion,” Cardinal Raymond L. Burke, prefect of the Supreme Court of the Apostolic Signature and a former archbishop of St. Louis, said May 3.

The cardinal explained that the “discipline is not a punishment but the recognition of the objective condition of the soul of the person involved in such sin. It prevents them from committing sacrilege by violating the incomparable sanctity of the body, blood, soul and divinity of Christ, and safeguards the Christian community at large from scandal, that is, from being led to believe that the violation of the moral law, for example in what pertains to the inviolable dignity of human life, the integrity of marriage and the family, and the freedom of conscience, is not sinful, does not gravely break communion with our Lord.”

Cardinal Burke spoke at an international conference of pro-life organizations the day before Italy’s fourth annual March for Life.

The cardinal also took part in the May 4 demonstration, joining some 40,000 marchers along the route from Rome’s Piazza della Repubblica to St. Peter’s Square, a distance of nearly two and a half miles. Demonstrators carried signs bearing messages such as “Conceived from rape, I love my life,” and “Let’s not kill the future.” The estimated turnout represented an increase of one-third over last year.

The marchers reached St. Peter’s Square in time to hear Pope Francis pray the “Regina Coeli” at noon, after which he greeted them, thanking and congratulating them for their work, and noting that this year’s march had a particularly “international and ecumenical character.”

According to organizers, more than 50 pro-life groups active in about 20 countries took part in the march.

“Our march does not have an ecclesial character,” Virginia Coda Nunziante, president of the March for Life, told participants May 4. “Anyone who opposes abortion in the name of reason can take part, in a climate of great liberty. The defense of life is not an act of faith, but of reason.”