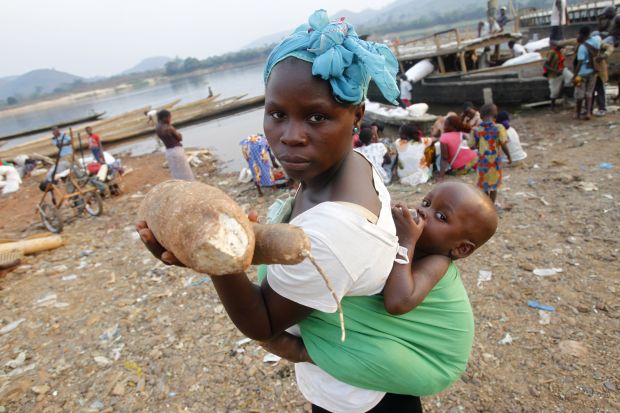 A woman sells cassava on the banks of the Ubangi River near the border between the Central African Republic and the Democratic Republic of Congo in February. (CNS photo/Legnan Koula, EPA)

OXFORD, England (CNS) — Catholic bishops in conflict-torn Central African Republic warned that their country’s wildlife and natural resources are being plundered by outside groups and demanded more effective leadership from the transitional government.

“This crisis, with its insecurity and violence, are providing the instability which favors the anarchic and illegal exploitation of our resources,” the permanent council of country’s bishops’ conference said in a statement May 12.

“We appreciate the international community’s mobilization, and all efforts made to resolve the crisis, which sadly continues to throw families into mourning, take away innocent lives and cause great material damage throughout our national territory. But the record till now has been negative,” the statement said.

The bishops cited the butchering of hundreds of elephants for their ivory in the Dzanga Sangha Reserve in the southwestern part of the country, as well as the slaughter of sheep and cattle belonging to local tribesmen.

They added that the eco-system was being threatened by the failure of forestry companies to replant destroyed areas, while the hunt for diamonds and other mineral deposits was “fueling the conflict and causing more innocent blood to flow.”

The statement said the current crisis had been “a windfall” for armed groups and poachers from neighboring Chad and Sudan who had “launched an irrational massacre of other protected species with a joyful heart.”

“Human life and dignity no longer have value here. Killings and robberies are committed with total impunity, and the Central African Republic had become an open-pit prison,” the bishops said.

“The transitional president and government should be paying greater attention, notably to issues of national security, protecting the physical integrity of citizens and their possessions, the internally displaced and their resources now being pillaged.”

The statement was issued as police in the capital Bangui confirmed 13 villagers were burned alive at Kaga Bandoro by armed men from the Arab-speaking Islamist Seleka rebels, and a French photojournalist, Camille Lepage, was reported killed at Bouar by members of the rival Anti-Balaka, a mostly Christian militia.

It said the security situation had “greatly worsened” in recent days, as Seleka and Anti-Balaka remnants “made the most of their power to harm,” and attempted to “retake power by force.”

They added that fighters from the Lord’s Resistance Army, which also operates in South Sudan and the Democratic Republic of Congo, were “menacing stability” in eastern areas of the country.

Abou Moussa, United Nations special representative for Central Africa, told the Associated Press May 12 that LRA leader Joseph Kony, already indicted for war crimes by the International Criminal Court, was being hunted by troops in the Central African Republic. Several LRA commanders have been captured or killed in the country in the last year.

The bishops’ statement said 838,000 people, a fifth of the population, have been internally displaced by continuing violence. More than 313,000 now live in 66 separate camps in the capital of Bangui, and another 245,000 have fled to neighboring countries.

It also condemned the April 16 abduction of Bishop Nestor Nongo-Aziagbia of Bossangoa and three priests by Seleka militants and the April 18 killing of Father Christ Forman Wilibona from the same diocese.

In a May 14 interview with Catholic News Service, Bishop Nongo-Aziagbia said he was grateful to African peacekeeping troops for rescuing him and planned to bring a court case against his abductors after convalescing in Bangui.

However, he added, the peacekeepers told him they had “too much on their minds” to follow up the incident while no one from the transitional government of interim Prime Minister Andre Nzapayeke had condemned it.

“The general feeling is the government and president are just puppets. They don’t even react when people are killed, while the international community takes decisions without consulting them,” the bishop said.

“Our own national army lacks arms and resources to protect the country. People are wondering what’s really going on and what kind of plans are being followed.”

NEXT: If you want peace, end arms trade and help immigrants, pope says