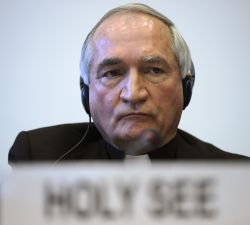 VATICAN CITY (CNS) — No matter how sophisticated and how many algorithms are programmed to help a drone or other machine make calculations before firing on a target, autonomous weapons systems could never comply with international human rights law, a Vatican official said.

Archbishop Tomasi said it was essential “to recognize that autonomous weapon systems can never replace the human capacity for moral reasoning, including in the context of war.”

“The development of autonomous weapon systems will ultimately lead to widespread proliferation,” the archbishop said, and “the development of complex autonomous weapon systems which remove the human actor from lethal decision-making is short-sighted and may irreversibly alter the nature of warfare in a less humane direction, leading to consequences we cannot possibly foresee, but that will in any case increase the dehumanization of warfare.”

Archbishop Tomasi said technology obviously has many beneficial uses and even the idea of a nation keeping its soldiers out of harm’s way is praiseworthy, but when nations are using or considering the use of technology to target and kill human beings, they are obliged to weigh decisions in a way only a human being can.

“Taking humans ‘out of the loop’ presents significant ethical questions, primarily because of the absence of meaningful human involvement in lethal decision-making,” he said. “Can machines — well-programmed with highly sophisticated algorithms to make decisions on the battlefield in compliance with international human rights law — truly replace humans in decisions over life and death? The answer is no.

“Decisions over life and death inherently call for human qualities, such as compassion and insight, to be present. While imperfect human beings may not perfectly apply such qualities in the heat of war, these qualities are neither replaceable nor programmable,” the archbishop said.

The archbishop also expressed concern about autonomous weapons systems becoming the object of a new arms race. “History shows that developments in military technology, from crossbows to drones, give the inventing side a temporary military advantage,” until the technology is quickly copied, he said.

Additionally, he added, one of the main motivations for developing such weapons systems — keeping one’s own military personnel safe — removes one of the biggest deterrents to hasty military action.

“Furthermore,” he said, “the delegation of the human decision-making responsibilities to an autonomous system designed to take human lives creates an accountability vacuum that makes it impossible to hold anyone sufficiently accountable for violations of international law incurred by an autonomous weapon system.”