Destroying creation is destroying a gift of God, pope says 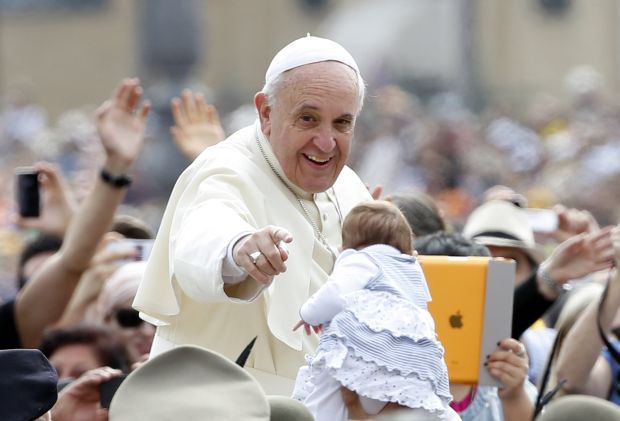 Pope Francis greets a baby as he arrives for his weekly audience in St. Peter's Square. (CNS photo/Tony Gentile, Reuters)

VATICAN CITY (CNS) — Polluting or destroying the environment is like telling God one does not like what he created and proclaimed to be good, Pope Francis said.

The Bible says that after every stage of creation, God was pleased with what he had made, the pope said May 21 at his weekly general audience. “To destroy creation is to say to God, ‘I don’t like it.'”

On the other hand, he said, safeguarding creation is safeguarding a gift of God. “This must be our attitude toward creation: safeguarding it. If not, if we destroy creation, creation will destroy us. Don’t forget that!”

Continuing a series of audience talks about the gifts of the Holy Spirit, Pope Francis said the gift of knowledge helps people see creation with God’s eyes, recognizing its beauty and seeing it as a sign of God’s love for men and women, who are the crown of his creation.

“Creation is not a property that we can dominate at our pleasure nor does it belong to only a few,” he said. “Creation is a gift, a marvelous gift God has given us to care for and use for the benefit of all with great respect and gratitude.”

The seven gifts of the Holy Spirit — wisdom, understanding, counsel, fortitude, knowledge, piety and fear of the Lord — are not simply human virtues or talents, the pope said. And knowledge is not just the human capacity “to understand the reality that surrounds us and discover the laws that regulate nature and the universe.”

Rather, he said, the gift of knowledge helps people understand, “through creation, the greatness of the love of God and his profound relationship with every creature.”

The gift of knowledge helps people recognize that all things that are beautiful — both things found in nature and things that are the result of human ingenuity — speak of God, he said. “The Spirit leads us to praise the Lord from the depths of our heart and to recognize, in all that we have and all that we are, a invaluable gift of God and a sign of his infinite love for us.”

At the end of the audience, Pope Francis led the recitation of the Hail Mary as a prayer for the victims of flooding in Bosnia-Herzegovina and in Serbia. He asked the international community to assist the two Balkan nations, where more than three dozen people died and tens of thousands were left homeless in late May.

Pope Francis also told the estimated 50,000 people gathered in St. Peter’s Square that May 24 is the feast of Our Lady Help of Christians, a Marian feast particularly dear to Catholics in mainland China. He asked people to pray that “Catholics in China may continue to believe, to hope and to love and, in every circumstance, to be a leaven of harmonious coexistence among their fellow citizens.”

NEXT: Soldiers lay down weapons for rosaries as they pray, pay homage to Mary