Soldiers lay down weapons for rosaries as they pray, pay homage to Mary 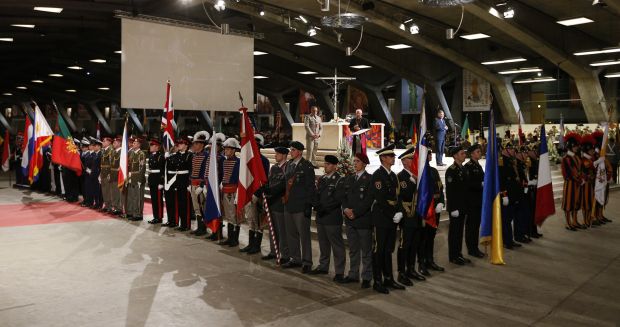 Military personnel from 36 nations, including the Vatican, participate in the opening ceremony of the International Military Pilgrimage at the Shrine of Our Lady of Lourdes in southwestern France May 16. (CNS photo/Paul Haring)

LOURDES, France (CNS) — It looked like any other military parade with bands playing, flags waving and thousands of men and women marching in colorful uniforms decorated with medals and ribbons.

But instead of impressive displays of tanks and trucks, troops from dozens of nations fell in line behind religious banners, a large wooden cross and a rose-strewn statue of Mary. Candles and rosaries — not weapons or rifles — were held aloft in soldiers’ hands.

Such scenes were common during the 56th International Military Pilgrimage to the sanctuaries of Our Lady of Lourdes May 16-18.

More than 12,000 retired and active duty military personnel, their families and compatriots from 36 nations took part in the annual encounter to pray for peace and the spiritual healing of nations and individuals. A large number taking part, and given special prominence in the many processions, were those wounded in the line of duty.

Among the military personnel tackling disabilities were about 60 retired or active duty U.S. soldiers together with another 60 caregivers, family members, chaplains and support staff.

They were participating in the “Warriors to Lourdes” pilgrimage, sponsored by the U.S. Archdiocese for the Military Services and the Knights of Columbus. The Knights covered the costs for the wounded personnel for the May 13-19 encounter of prayer, healing and friendship in Lourdes.

“It’s really been great for both those who have come with a petition in their heart — suffering in some way, and those who are helping them,” Supreme Knight Carl A. Anderson told Catholic News Service.

With Memorial Day on the horizon and foreign military operations set to wind down, “We don’t want to forget those who have sacrificed so much and still need our attention and support — our wounded warriors. So this is a way of increasing consciousness of their situation,” he said.

The Knights, the largest lay Catholic organization in the world, began during World War I to provide their service and help — especially pastoral and educational support — for U.S. troops.

Expanding their initiatives, last year the Knights began the “Warriors to Lourdes” pilgrimage as another way to offer “spiritual support and spiritual development, and these pilgrimages, we think, are a wonderful way of doing that,” Anderson said.

The weeklong program provided opportunities for prayer, the sacrament of reconciliation, personal reflection during a Way of the Cross procession, eucharistic adoration and celebrating Mass.

Participants could take part in candlelight vigils to the Massabielle grotto where Mary appeared to St. Bernadette in 1858, drink the water flowing from the sanctuaries’ spigots and be immersed in the special baths inside chambers near the grotto.

“We come to this holy ground to pray for the intercession of our Blessed Mother,” said Auxiliary Bishop F. Richard Spencer of the U.S. Archdiocese for the Military Services.

The prayers are for “the healing that is so necessary with our men and women who have worn courageously our uniform in battles, especially during the last 12 years of these wars, and now are suffering from their wounds. We pray for healing, patience and understanding,” he said.

The pilgrimage was open to non-Catholics who were seeking spiritual reflection and renewal because Lourdes is regarded as a special place of prayer for many Christians, and “they, too, are in need of healing and they, too, trust in the intercession of the Blessed Mother,” the bishop said.

Attending during the larger international military pilgrimage was also important for “showing and demonstrating that we can come together to truly yearn and pray for peace,” he added.

Silent and solemn ceremonies segued into pomp and pageantry as military bands roamed the small village all hours of the day and night, belting out national anthems, marching tunes and folk songs.

The camaraderie and celebration easily crossed cultural lines as soldiers from different nations asked to have their pictures taken together and traded berets and insignia.

The theme of the international military pilgrimage, “Servant of Christ, Servant of Peace,” Anderson said, “really strikes a chord, I think, with all of our women and men in the military and all of us who hope to support them.”

“Those men and women who sacrifice for our country really are the ones more than anyone else who really want peace,” he said.

“Peace is a precious, but fragile” treasure, Pope Francis said in a written message read aloud during the international opening ceremony in the underground Basilica of St. Pius X May 16.

“Soldiers have an irreplaceable role in building peace when they put themselves at the service of the people in guaranteeing order and restoring security,” said the message, written and signed on behalf of the pope by the Vatican secretary of state, Cardinal Pietro Parolin.

The pope expressed his gratitude for the generous service of so many men and women and reminded them that “serving Christ inevitably leads us to serving peace, since it’s in him that we become brothers and sisters, capable of dialogue and peace.”

The unique international gathering of armed forces from sometimes warring nations at the sacred Marian shrine in southern France started after World War II when French, Russian, British, Belgian and U.S. soldiers celebrated Mass at the Rosary Basilica as part of a prayer for peace.

A German military chaplain and former prisoner of war was invited to attend the pilgrimage in 1947. And as more and more soldiers and countries began participating, the gathering became an official annual event in 1958 — on the 100th year anniversary of the apparitions of Mary to St. Bernadette.

NEXT: In Lourdes, military chaplains find a sacred space for healing