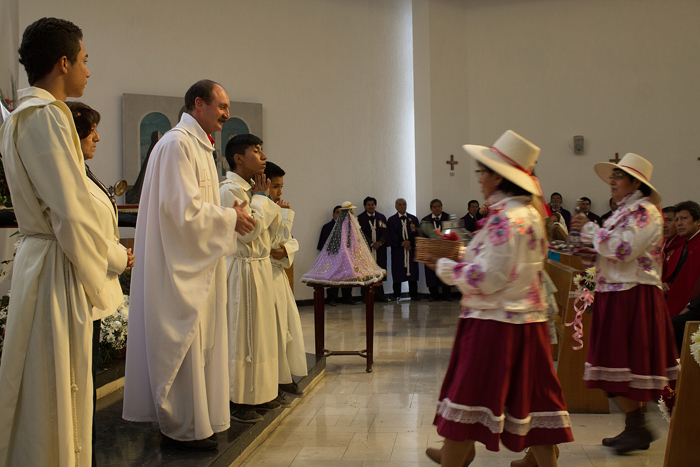 Father Isaldo Antonio Bettin receives the offertory gifts from a group of women wearing traditional Peruvian clothes during a May 4 Mass in honor of the Virgin of Chapi at the Italian Parish of Our Lady of Pompeii in Santiago, Chile. (CNS photo/courtesy Ricardo Rocha)

SANTIAGO, Chile (CNS) — It was getting dark in Quilicura, a poor industrial zone in the northern area of Santiago, the capital of Chile, when a car with three young men pulled up to St. John Paul II Church.

After exchanging some words in the Creole language, the language of Haitians, one of them got down and rushed to the church, holding an empty Coca-Cola bottle. Only a handful of parishioners were in the church at that hour on a Friday evening and the man asked one of them if any holy water was available. A middle-aged woman led him to a font, where the Haitian filled the half-liter bottle. He left looking much more relieved.

“We use holy water to bless our homes, but Haitians use it way more often than us,” one of the parishioners said. “Sometimes, when they don’t find any, they wait for one of the fathers to bless some water for them.”

He has been in Chile for six years since leaving Port-au-Prince, Haiti’s capital, seeking a country to continue his studies after high school. He thought Chile could be that place.

“Before I came, I called a friend who was already in Chile,” Desseix said. “He told me it was a good place. I came to study, but when you arrive to a country, you really don’t know the way things work, especially if you don’t know the language.”

Desseix lives with his wife and three children in Quilicura, where most of the Haitian immigrants in Santiago reside. He works at a local factory and is still struggling to continue his studies. Each Saturday night, he gathers with about two dozen Haitians at St. John Paul II Parish offices.

“I have a group here. The fathers give us the possibility to use the place and play our music,” he said.

Desseix is among the thousands of new faces in Chilean Catholic parishes. They bring long-practiced customs and traditions from their homelands, practices that were hardly known in Chile until a few years ago.

Among them are a devotion to the Lord of Miracles from Peru, the dances for Our Lady of Copacabana, patroness of Bolivia, and the Colombian Day of the Little Candles, to honor Mary maternity and welcome the holiday season.

These new faces are result of the strong immigration to Chile during in recent years because of its political and economic stability. According to the Chilean Interior Ministry, an estimated 415,540 legal immigrants live in the country, representing nearly 3 percent of the population.

The statistics also show a rapid rise of the Haitian population as well. In 2009, Chile issued 305 temporary residence permits to Haitian citizens, increasing to 2,577 in 2013.

Although the number of legal immigrants remains a small part of the overall Chilean population, their concentration in Santiago and the north of the country has been enough to start a debate and even protests in some communities.

In October, a group of inhabitants of Antofagasta, in northern Chile, marched against Colombian immigration. Despite initial concerns from authorities, fewer than 100 people attended the demonstration.

On General Bustamante Avenue, in the middle class neighborhood of Providencia, stands the Italian parish of Our Lady of Pompeii. The parish hosts the offices of the Chilean Catholic Immigration Institute, where immigrants go to look for work or seek legal assistance to obtain permanent residence permits.

“We always have new people coming to the parish. Lately, most from Colombia and Bolivia, but also from Peru, Dominican Republic and Haiti,” he said.

About the October march in Antofagasta, he said that “in small cities people sometimes reject immigrant groups, but it’s something that will be surpassed within time.”

The Italian parish is also the place where 20 years ago a small group of Peruvian immigrants gathered to honor the Lord of Miracles, Christ of Pachacamilla. The ceremony includes a procession and the veneration of a traditional mural of Jesus. The celebration was the beginning of the Chilean Brotherhood of the Lord of Miracles in Santiago.

The Peruvian architect Ricardo Rocha is the current president of the organization, which gathers nearly 20,000 people each October in a procession from General Bustamante Avenue toward the Metropolitan Cathedral. Rocha is one of the 32 men, dressed in traditional purple clothing, who carry the image and platform that weighs more than 2,000 pounds.

Rocha remembers that during the first processions, the neighbors of General Bustamante Avenue stared at the Peruvians, stunned. “Today there are Chileans, Colombians and Ecuadorans involved in the procession. … Nowadays, people asked us frequently, ‘Who is the Lord of Miracles?’ From time to time, someone shouts something inappropriate from his balcony, but I think is something that you can’t avoid.”

PREVIOUS: In Holy Land, Pope Francis will focus on unity, not ignore conflict

NEXT: Pope says church tensions must be resolved with discussion, prayer