In Holy Land, Pope Francis will focus on unity, not ignore conflict 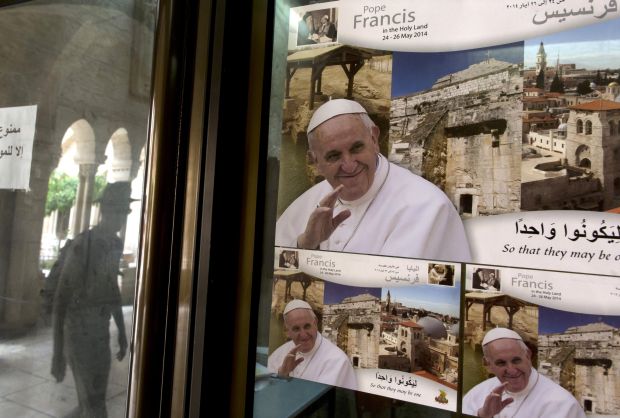 A Christian pilgrim walks from the courtyard of St. Catherine Church where a poster for the upcoming visit of Pope Francis to the Holy Land May 24-26 is displayed in the West Bank town of Bethlehem April 24. (CNS photo/Jim Hollander, EPA)

VATICAN CITY (CNS) — On Pope Francis’ first trip to the Holy Land, May 24-26, his agenda will focus on the search for Christian unity, particularly between the Catholic and Orthodox churches. But inevitably, in a region so rich in history and so fraught with conflict, he will address other urgent issues, including dialogue with Jews and Muslims, the Israeli-Palestinian peace process and the plight of the Middle East’s shrinking Christian population.

The Vatican has emphasized that the pope’s main purpose on the trip is to meet in Jerusalem with Ecumenical Patriarch Bartholomew of Constantinople, considered first among equals by Orthodox bishops. The official logo for the papal visit is an icon of the Apostles Peter and Andrew, patron saints of the churches of Rome and Constantinople, joined in a fraternal embrace.

Pope Francis and Patriarch Bartholomew are scheduled meet four times during the pope’s three-day visit. Their private meeting May 25 will mark the 50th anniversary of the encounter in Jerusalem between Pope Paul VI and Ecumenical Patriarch Athenagoras of Constantinople, which opened the modern period of ecumenical dialogue.

At an ecumenical service that evening, representatives of the three churches who share custody of the Church of the Holy Sepulcher — Catholic, Greek-Orthodox and Armenian — will pray together at the site of Jesus’ burial and resurrection. The event will be “extraordinarily historic,” according to the Vatican spokesman, Jesuit Father Federico Lombardi, since the three communities normally observe strict separation when they worship in the church.

Despite the focus on relations among Christians, Pope Francis’ brief visit will not take in the northern Israeli region of Galilee, where most of Israel’s Christians live. Both St. John Paul and Pope Benedict included the region on their much longer visits, respectively, in 2000 and 2009.

About 1,000 Galileans, out of a total congregation of about 9,000, will attend Pope Francis’ Mass in Bethlehem May 25. Christians from Lebanon and Iraq are expected at the other public papal Mass of the trip, in Amman, Jordan, May 24.

The predicament of Christians throughout the Middle East will be “among the principle concerns” that the pope discusses with Patriarch Bartholomew, the patriarch recently told Catholic News Service. The region’s Christian population has sharply diminished and grown increasingly precarious over the last decade, following the 2003 invasion of Iraq, the Arab Spring revolts against authoritarian regimes and the Syrian civil war.

Pope Francis has been especially vocal about Syria, and if he addresses that conflict during the trip, he is most likely to do so in Jordan, where he will meet with Syrian as well as Iraqi refugees following a visit to a possible site of Jesus’ baptism.

The pope’s encounters with non-Christian religious leaders are scheduled for the last day of his visit, when he meets with the Muslim grand mufti of Jerusalem and the two chief rabbis of Israel in separate events. In contrast to the visits of St. John Paul and Pope Benedict, this papal trip to the Holy Land will not feature any event with representatives of the three major monotheistic faiths.

Rabbi David Rosen, international director of interreligious affairs for the American Jewish Committee, calls that omission a “missed opportunity” for promoting peaceful coexistence, and speculates it could reflect the Vatican’s desire to avoid a repeat of an embarrassment during the 2009 papal visit. On that occasion, an interreligious event in Jerusalem involving Pope Benedict was cut short after a Muslim cleric who was not scheduled to speak took the microphone and criticized Israeli policies toward the Palestinians.

The interreligious dimension of the upcoming trip was enhanced May 15 when the Vatican spokesman announced that, for the first time in history, a papal entourage would include Muslim and Jewish leaders: Omar Abboud and Rabbi Abraham Skorka, two friends of the pope from his days as archbishop of Buenos Aires.

All of the events on Pope Francis’ schedule will unfold against the sobering background of the latest breakdown in peace negotiations between Israel and Palestine. The pope is most likely to address that problem in his speeches and private remarks to Palestinian and Israeli political leaders. His meeting with Palestinian refugee children May 25 will also serve as a poignant illustration of the need for a resolution.

In a larger sense, the pope’s support for the unity and well-being of the region’s Christians serves the cause of peace among other groups as well, says Cardinal Edwin F. O’Brien, grand master of the Equestrian Order of the Holy Sepulchre, who will be accompanying the pope in the Holy Land.

“We build bridges not walls,” said the cardinal, noting that much of Palestine’s Muslim leadership was educated in Christian schools.

“The presence of Christianity in the Middle East, even though a minority presence, is and has been for many years a very important ingredient for peace and harmony,” the cardinal said. “But it’s facing extinction right now.”

Contributing to this story were Judith Sudilovsky in Jerusalem and Dale Gavlak in Amman.

NEXT: Immigration twist: Chile grapples with newcomers from Haiti