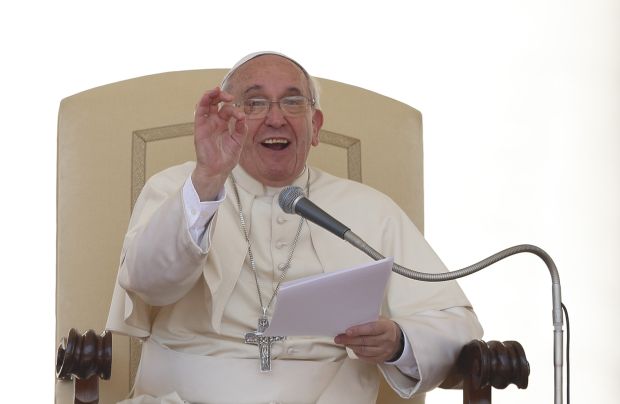 Pope Francis gives his talk during his general audience in St. Peter's Square at the Vatican. (CNS photo/Paul Haring)

VATICAN CITY (CNS) — Pope Francis called on the world’s Christians to pray with him for peace in the Middle East, help convince governments to come to the aid of refugees and pray for Christian unity.

While peace is a gift from God, it is also built out of the day-to-day handiwork of individuals: true “artisans of peace,” who are capable of crafting fraternity and reconciliation with people of all cultures and religions, he said during his general audience in St. Peter’s Square May 28.

Reviewing his May 24-26 trip to Jordan, Israel and the Palestinian territories, the pope told the tens of thousands of people in the square that his visit to the Holy Land, “that blessed land,” was a great gift of grace for the church and himself.

He said he had gone to “bring a word of hope, but I received one in return, too,” meeting people who still hope “against hope,” enduring much suffering, “like those who fled their own country because of conflict,” or facing discrimination and persecution “because of their faith in Christ.”

“During the pilgrimage,” he said, “I encouraged authorities to continue efforts to diffuse the tensions in the Middle East region, above all in martyred Syria, as well as to continue to seek a fair solution to the Israeli-Palestinian conflict.”

That is why, he said, he invited Israeli President Shimon Peres and Palestinian President Mahmoud Abbas — “both men of peace and builders of peace — to come to the Vatican to pray together with me for peace.”

As the people in the square applauded, the pope told them, “Please, I ask all of you not to abandon us; pray hard so that the Lord gives us peace in that blessed land. I am counting on your prayers — pray hard, and a lot, so that peace may come.”

“There are no industries of peace” — outside, super-entities that can magically mass-produce a world free of conflict — the pope told the crowd. “No,” peace “is created day-by-day, handcrafted” by individuals whose hearts are open to God’s gift of peace.

“That’s why I urged Christians to let themselves be anointed” by the Holy Spirit, so they may always be “ever more capable of gestures of humility, fraternity and reconciliation” in their interactions with people of different cultures and religions.

During his trip, he said, he encouraged everyone to work for peace. “Each time I did it as a pilgrim, in the name of God and mankind, carrying in my heart great compassion for the children” of the Holy Land, which “has lived with war for too long and has the right to finally know days of peace.”

The pope said he was truly “struck by the generosity of the Jordanian people for welcoming refugees.” He said he thanked the country’s leaders and people for their humanitarian efforts, “which merit and require constant support from the international community.”

He asked that God bless not only the refugees, but those who come to their aid, and he called on people to “ask all international bodies to help” Jordan in its efforts.

Despite the importance of fostering peace in the Middle East, the pope said the main aim of his trip was to commemorate the 50th anniversary of a historic encounter between Pope Paul VI and Ecumenical Patriarch Athenagoras.

“That prophetic gesture” marked a “milestone” in what has been “an arduous, but promising journey toward unity for all Christians,” Pope Francis said.

Meeting with Ecumenical Patriarch Bartholomew of Constantinople — a “beloved brother in Christ” — was “the high point” of the visit, the pope said.

Together with leaders of other Christian communities, they held an ecumenical prayer service at the Church of the Holy Sepulcher — the site of Jesus’ burial and resurrection. The event was seen as historic since the Catholic, Greek Orthodox and Armenian communities normally observe strict separation when they worship in the church.

Just as that sacred place echoed the joy of Christ’s resurrection, the pope said, “we also sensed all the bitterness and suffering of the divisions that still exist among Christ’s disciples.”

Such divisions are “truly harmful,” especially when evident at the very spot where Jesus’ resurrection was proclaimed.

During the celebration, the pope said, “we heard loud and clear the voice of the risen Good Shepherd who wants all his sheep to be of one flock.”

The pope had special words of thanks for the Franciscan Custody of the Holy Land, responsible for preserving the sites commemorating the birth, death and resurrection of Jesus, as well as welcoming pilgrims and helping those in need.

“These Franciscans are amazing! Their work is wonderful, the things they do!” he said.

He also thanked all the government officials, “Jordanian, Israeli and Palestinian, who welcomed me with so much courtesy and, I daresay, with friendship, too.”

NEXT: Pope blames ‘culture of comfort’ for intentionally childless marriages