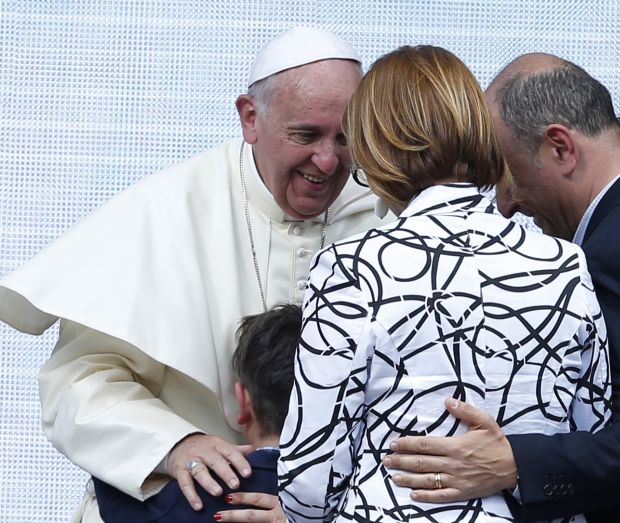 VATICAN CITY (CNS) — Pope Francis blamed a “culture of well-being” and comfort for convincing married couples that a carefree life of world travel and summer homes was better than having children.

He said married couples should look at how Jesus loves his church to learn how to be faithful, perseverant and fruitful in their vocation.

About 15 married couples celebrating their 25th, 50th or 60th anniversaries joined the pope June 2 for his early morning Mass in the Domus Sanctae Marthae, where he lives.

In his homily, Pope Francis said fidelity, perseverance and fruitfulness were the three characteristics of God’s love for his church and should be the same three pillars of a Christian marriage.

Just as the church is fruitful by generating new children in Christ through baptism, marriage should be open to new life, the pope said in his homily, according to a report by Vatican Radio.

“In a marriage, this fruitfulness can sometimes be put to the test, when children don’t come or when they are ill,” he said.

Couples who deal with infertility or loss can still look to Jesus and “draw the strength of fruitfulness that Jesus has with his church.”

However, “there are things that Jesus doesn’t like,” he said, such as married couples “who don’t want children, who want to be without fruitfulness.”

The pope blamed “this culture of well-being” for convincing married men and women to intentionally remain childless.

This culture of comfort, he said, “has convinced us that ‘it’s better to not have children! It’s better. That way you can see the world, be on vacation, you can have a fancy home in the country, you’ll be carefree.'”

People think it is better or easier “to have a puppy, two cats, and the love goes to the two cats and the puppy. Isn’t this true or not? Have you seen this?” he asked the people in the congregation.

“And in the end, this marriage will end in old age in solitude, with the bitterness of bad solitude.”

The pope said Jesus is always faithful to his church — “his bride: beautiful, holy, sinner, but he loves her just the same.”

Jesus is always faithful, even to those who sin and deny him; and “this fidelity is like a light” that shines on marriage, showing what “the faithfulness of love” looks like, he said.

In addition to always being faithful, love also must be “untiring in its perseverance,” he said.

Just as Jesus forgives his church, spouses must ask each other for forgiveness so that “matrimonial love can go on,” he said. “Perseverance in love” must endure, in good times and bad, “when there are problems, problems with the kids, money problems, problems here and there.”

“Love perseveres,” he said. “It keeps going, always seeking to resolve things in order to save the family.”

NEXT: Pope, at charismatic rally in stadium, invites them to Vatican in 2017