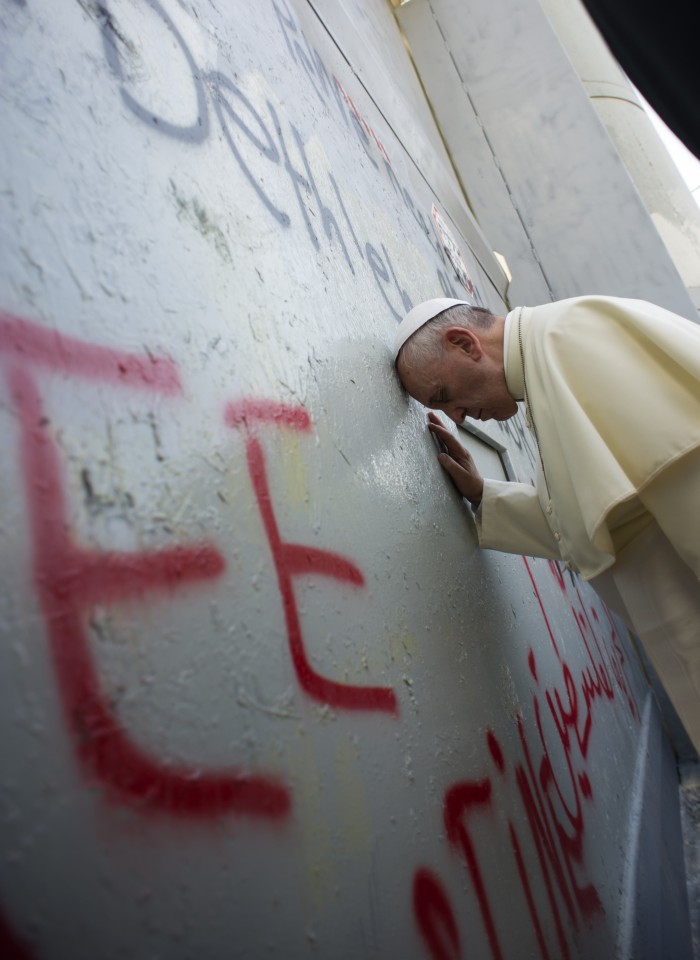 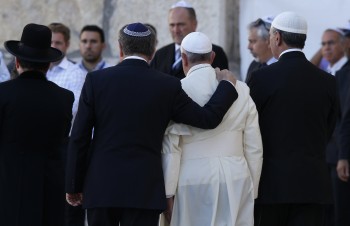 Pope Francis is embraced by Argentine Rabbi Abraham Skorka as he leaves after praying at the Western Wall in Jerusalem May 26. On the right is Omar Abboud, Muslim leader from Argentina. “We did it,” Rabbi Skorka said he told the pope and Abboud. The pope’s message contained the text of the Our Father and of the 122nd Psalm, traditionally prayed by Jewish pilgrims who travel to Jerusalem. (CNS photo/Paul Haring)

JERUSALEM (CNS) — Pope Francis invited Palestinian President Mahmoud Abbas and Israeli President Shimon Peres to pray together at the Vatican for peace between their nations.

The pope made the announcement May 25, after praying the “Regina Coeli” at the end of Mass that Abbas attended in Manger Square, in Bethlehem, West Bank.

Later in the day, arriving at Israel’s Ben Gurion International Airport in Tel Aviv, Pope Francis was greeted by Peres and by Prime Minister Benjamin Netanyahu. There the pope repeated his invitation to Peres using exactly the same words with which he had invited Abbas.

He also urged Israel to stay on the “path of dialogue, reconciliation and peace,” saying “there is simply no other way.”

“The right of the state of Israel to exist and to flourish in peace and security within internationally recognized borders must be universally recognized,” the pope said. “At the same time, there must also be a recognition of the right of the Palestinian people to a sovereign homeland and their right to live with dignity and with freedom of movement.”

Pope Francis also echoed Peres’ and Netanyahu’s words, in their speeches of welcome, condemning the previous day’s shootings at the Jewish Museum in Brussels, where three people, including two Israeli citizens, were killed.

The pope arrived in Israel on the last leg of a May 24-26 trip to Jordan, the Palestinian territories and the West Bank.

Earlier in the day, en route to the Bethlehem Mass, he made an unscheduled stop to pray before a controversial separation wall, built by Israel over Palestinian protests on West Bank land. The pope unexpectedly stopped the vehicle and alighted, then walked over to the graffiti-covered structure and rested his forehead against it in silence for a few moments. Jesuit Father Federico Lombardi, the Vatican spokesman, later confirmed that the pope had been praying as he stood against the wall.

Father Lombardi told journalists the stop was a very important symbol of the pope’s understanding of the significance of the wall and was a manifestation of his identification with the suffering of the people, even though he made no mention of the wall in his spoken statements.

The spokesman also told journalists no date had been set for the prayer session in Rome, but that he hoped it would be soon. Father Lombardi said as far as he knew no pope had ever issued a similar invitation.

Peres’ term of office as president expires in July.

Meeting with Palestinian leaders in Bethlehem, Pope Francis voiced his sympathy with “those who suffer most” from the decades-long Israeli-Palestinian conflict, a situation he called “increasingly unacceptable.”

During a speech to Abbas and other dignitaries in the presidential palace, the pope decried the Israeli-Palestinian conflict’s “tragic consequences,” including “insecurity, the violation of rights, isolation and the flight of entire communities, conflicts, shortages and sufferings of every sort.”

“In expressing my closeness to those who suffer most from this conflict, I wish to state my heartfelt conviction that the time has come to put an end to this situation which has become increasingly unacceptable,” he said.

The pope said lasting peace would require the “acknowledgement by all of the right of two states to live in peace and security within internationally recognized borders.”

“Each side has to make certain sacrifices,” Pope Francis said, calling on Israelis and Palestinians alike to “refrain from initiatives and actions which contradict the stated desire to reach a true agreement.”

The pope also expressed his concern for Palestinian Christians, who he said contributed “significantly to the common good of society” and deserved accordingly to be treated as “full citizens.”

Christians make up an estimated 1 percent of the 4.5 million people living under the Palestinian authority.

The pope voiced hopes that an eventual agreement between the Vatican and the Palestinian Authority on the status of Catholics would guarantee religious freedom, since “respect for this fundamental human right is, in fact, one of the essential conditions for peace, fraternity and harmony.”

His words echoed his remarks the previous day in Amman, Jordan, where he called for religious freedom throughout the Middle East, including respect for the right to change one’s religion. 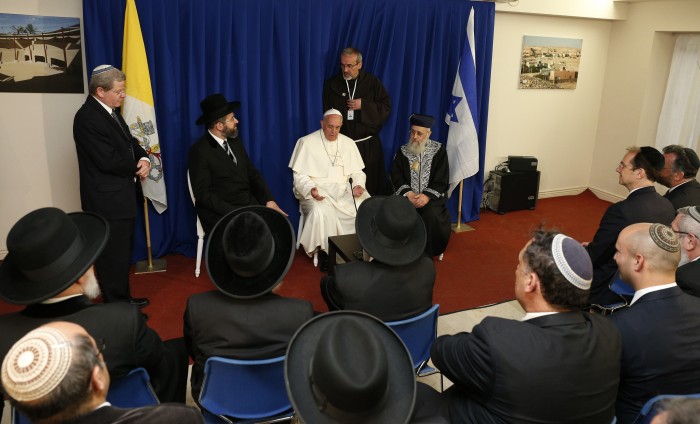 Pope Francis meets privately with Israel’s two chief rabbis, Ashkenazi Rabbi David Lau, left onstage, and Sephardic Rabbi Yitzhak Yosef, right, at the Heichal Shlomo center in Jerusalem May 26. The pope told them that Jews were not collectively responsible for the death of Jesus and called on Christians and Jews to develop greater appreciation for their common “spiritual heritage,” through deeper knowledge of each other’s faith, especially among the young. (CNS photo/Paul Haring)

NEXT: On last morning in Holy Land, pope reaches out to Muslims, Jews