On last morning in Holy Land, pope reaches out to Muslims, Jews 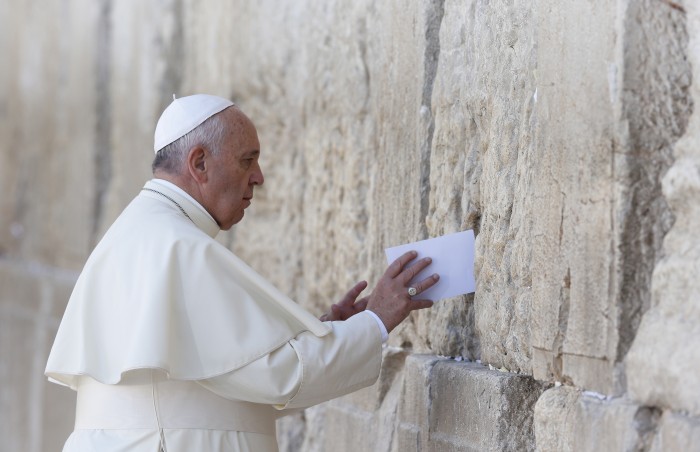 Pope Francis places a note in the Western Wall in Jerusalem May 26. (CNS photo/Paul Haring)

JERUSALEM (CNS) — Pope Francis spent the last morning of his three-day pilgrimage to the Holy Land meeting with Muslims and Jews and calling for closer relations among the three major monotheistic religions as the basis for peace in the region.

At his first appearance May 26, Pope Francis toured the Dome of the Rock on the Temple Mount, sacred to Muslims as the place from which Mohammed ascended to heaven, and spoke to Muslim leaders.

Addressing his listeners as “brothers” — rather than “friends,” as indicated in his prepared text — the pope pointed to Abraham as a common model for Muslims, Jews and Christians, since he was a pilgrim who left “his own people and his own house in order to embark on that spiritual journey to which God called him.”

“We must constantly be prepared to go out from ourselves, docile to God’s call,” especially “his summons to work for peace and justice, to implore these gifts in prayer and to learn from on high mercy, magnanimity and compassion,” the pope said.

In his remarks to the pope, the grand mufti of Jerusalem, Muhammad Ahmad Hussein, accused Israel of impeding Muslims’ access to Jerusalem’s holy sites.

Pope Francis then visited the Western Wall, the only standing part of the foundation of the Second Temple, destroyed in 70 A.D.

The pope stood for more than a minute and a half with his right hand against the wall, most of the time in silent prayer, before reciting the Our Father. Then he followed custom by leaving a written message inside a crack between two blocks.

Rabbi Abraham Skorka, a longtime friend of the pope from Buenos Aires and an official member of the papal entourage, said the pope’s message contained the text of the Our Father and of the 122nd Psalm, traditionally prayed by Jewish pilgrims who travel to Jerusalem.

Stepping away from the wall, the pope simultaneously embraced Rabbi Skorka and Omar Abboud, a Muslim leader from Buenos Aires and a member of the papal entourage.

“We did it,” Rabbi Skorka said he told the pope and Abboud.

The pope also visited a memorial to victims of terrorism, a stop that had not appeared on his original itinerary. It was added at the request of Israeli authorities, in reaction to his spontaneous decision the previous day to pray at Israel’s separation barrier in the West Bank. The separation wall, which Israel says it needs to protect itself from terrorism, has been a target of Palestinian protests and international condemnation. At the terrorism memorial, the pope prayed with his hand against the stone, the same gesture he used at the separation wall and at the Western Wall.

Following a brief wreath-laying at the grave of Theodor Herzl, father of the Zionist movement that led to Israel’s founding, Pope Francis visited the Yad Vashem Memorial to victims of the Holocaust. There he greeted half a dozen survivors of the Nazi genocide, kissing their hands in honor.

“He took my hand in his two hands and kissed my hand. I was dumbfounded. I never had a rabbi do that,” Joe Gottdenker of Toronto told Catholic News Service.

Gottdenker, who was rescued as a baby by a Polish Catholic couple, said he “was moved much more than I had even anticipated.”

In his remarks at Yad Vashem, the pope echoed and elaborated on God’s words to Adam after the fall, asking: “Who convinced you that you were god? Not only did you torture and kill your brothers and sisters, but you sacrificed them to yourself, because you made yourself a god.”

“Grant us the grace to be ashamed of what we men have done,” the pope prayed, “to be ashamed of this massive idolatry, of having despised and destroyed our own flesh which you formed from the earth, to which you gave life with your own breath of life.”

Pope Francis’ next stop was a visit to the two chief rabbis of Israel, leaders of the country’s Sephardic and Ashkenazi communities. The pope told them that relations between Jews and Catholics had progressed greatly in the half century since the Second Vatican Council, which declared that Jews were not collectively responsible for the death of Jesus and that God’s covenant with them had never been abrogated.

Pope Francis called on Christians and Jews to develop greater appreciation for their common “spiritual heritage,” through deeper knowledge of each other’s faith, especially among the young.

Even by the standard of his densely packed Holy Land trip, the pope’s morning was especially busy, and he soon fell behind schedule. Many other Jerusalem residents found themselves in the same situation, as streets cleared to facilitate the pope’s movements caused traffic jams across the city.

His public appearances for the morning ended with a visit to President Shimon Peres at his official residence, where the pope greeted and blessed a group of children with cancer and planted an olive tree in the garden as a symbol of peace.

The pope told Peres that he wanted to “invent a new beatitude, which I apply to myself, ‘Blessed is the one welcomed into the home of a wise and good man.'”

It was only the latest sign of the pope’s friendship with Peres, who invited him to Israel shortly after the start of his pontificate. At Yad Vashem, the pope greeted other dignitaries with a handshake but gave the president a warm embrace.

In his address at the presidential palace, Pope Francis praised Peres as a “man of peace and a peacemaker,” and, as the pope had done the previous day to Palestinian President Mahmoud Abbas, asked that “all parties avoid initiatives and actions which contradict their stated determination” to end the Israeli-Palestinian conflict.

The pope also stressed the “universal and cultural significance” of Jerusalem, and its importance to Christians, Muslims and Jews.

“How good it is when pilgrims and residents enjoy free access to the holy places and can freely take part in religious celebrations,” he said.

As in his speeches to Abbas and to the king of Jordan over the previous two days, Pope Francis also spoke up for the local Christian community, telling Peres its members wished to “contribute to the common good and the growth of peace,” and thus deserved to be “full-fledged citizens” of Israel.

NEXT: Pope urges Palestinian refugees to look to future