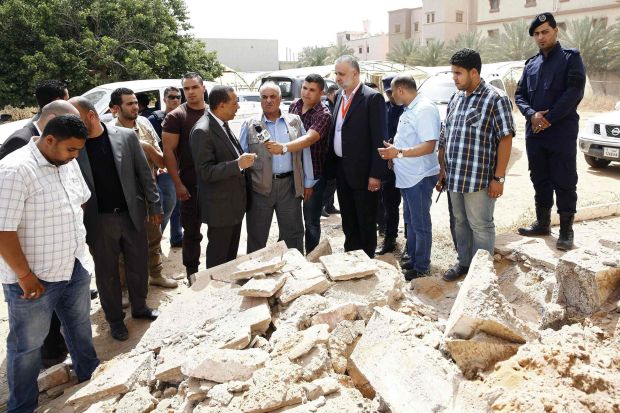 OXFORD, England (CNS) — Catholics in Libya are “living in fear” as conflict escalates between Islamist militias and followers of a rebel general, said priests in Tripoli and Benghazi.

“People have been warned not to leave home because of possible attacks, so far fewer are attending church now,” said Franciscan Father Allan Arcebuche, vicar general of Tripoli’s apostolic vicariate.

“The Catholic Church doesn’t encourage a visible security presence by the police or military at its Masses, since this could provoke militant groups. But we’re having to be cautious at our services and in our movements,” he told Catholic News Service by telephone May 22.

New parliamentary elections were announced for June 25 in a bid to avoid civil war after forces loyal to retired Gen. Khalifa Haftar attacked Islamist bases and accused the interim government of Prime Minister Ali Zeidan of failing to exert control.”

U.S. military forces in Italy said May 22 that they were ready to evacuate Americans, after Haftar’s forces launched an offensive against Islamist militias, including Ansar al-Shariah, the group blamed for a September 2012 attack on the U.S. Consulate in Benghazi.

Father Arcebuche said Catholic workers from India, the Philippines and sub-Saharan Africa had had their movements restricted by recent violence in Tripoli, adding that he hoped to gather more information about the fate of Catholics during traditional Muslim prayers May 23.

Meanwhile, a priest in Benghazi said church attendance had plummeted in a current “tense stand-off” in the eastern city, where local police had said they were no longer able to protect Christian activities.

“Everyone is living in fear and anxiety after recent incidents here,” said Father Jose Varkey, who ministers to Indian Catholics. “There’s no authority who can help us now in the country. When we approach local officials, they say they themselves have no security and can offer no support to us.”

Libya, a mostly Muslim country, was home to at least 40,000 Catholics before the autumn 2011 overthrow of dictator Moammar Gadhafi; many Catholics are believed to have left during the conflict.

“The Catholic Church hasn’t so far been directly threatened by the Islamists,” he said. “But people are apprehensive about what will follow if they saturate the whole of Tripoli and take control. We are already urging our members to observe the Islamic way of life strictly, such as by covering up and avoiding alcohol.”

In May 2013, Benghazi’s Catholic Immaculate Conception Church was damaged by a bomb, amid growing complaints by Christian communities of attacks and arbitrary detentions by Islamists.

In December, the national congress backed the adoption of Shariah, or Islamic law, in Libya, but assured Christian churches they would be free to continue activities.

Father Varkey told CNS he believed most Libyans were “sympathetic to Christians,” adding that those who were not were “personally motivated rather than anti-Christian.”

However, he added that Catholic priests and nuns now urgently needed protection to continue their work.

“Most people here have nothing against Christians — they’re sorry about our hardships and ready to warn us when there are dangers,” he said.

“But certain groups feel differently, at a time when there’s little effective government. Anything can happen, even at church services, and that’s why there’s much fear in our hearts.”