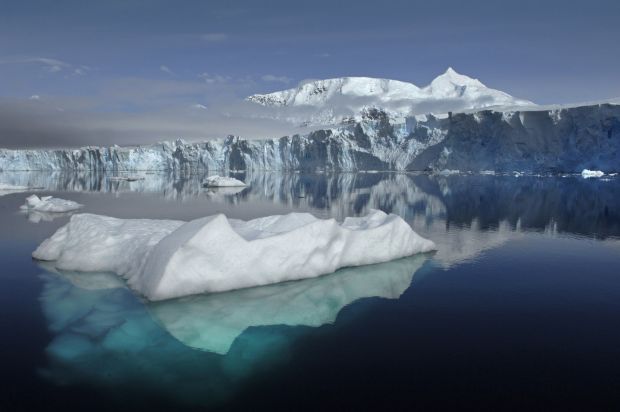 The Sheldon Glacier with Mount Barre in the background is seen from Ryder Bay near Rothera Research Station, Adelaide Island, Antarctica, in this undated handout photo. Climate change is causing the world's glaciers to melt at an unprecedented rate. (CNS photo/NASA handout via Reuters)

VATICAN CITY (CNS) — World leaders and policy makers need to look beyond the scientific and economic consequences of climate change and direct their attention to the human beings who will be most affected by rising global temperatures, a Vatican official said.

“As with most natural disasters, climate-related emergencies cause more suffering and personal loss on those who live in poverty,” Archbishop Zygmunt Zimowski, president of the Pontifical Council for Health Care Ministry, told members of the World Health Assembly in Geneva May 21.

The archbishop also thanked the assembly for its support of a global strategy to promote breast-feeding as a way to “assure the health and well-being of children worldwide.”

“Breast-feeding is a major protection against early child malnutrition,” he said, and “should be guaranteed by laws governing workplace practice.”

Breast-feeding should be accepted everywhere, “even in public,” he said.

While there are “many who openly disparage mothers who choose to breast-feed their children in public,” he said. Pope Francis has been a vocal supporter of nursing mothers, urging them to “overcome hesitation of breastfeeding their children when they are hungry.”

The archbishop’s comments came during the assembly’s May 19-24 meeting to discuss future policies for the World Health Organization. The archbishop led the Holy See delegation to Geneva, and the Vatican released a copy of his address May 21.

Concerning the threat of climate change, he said preventing or mitigating its impact on those who are most vulnerable “will require more than economic allocations and policy-setting.”

The world must help promote a different culture guided by the values of compassion, respect, solidarity and a commitment to justice, he said.

“There is overwhelming evidence that human activities have greatly contributed to the recent warming of the earth’s surface and that climate change as well as its consequences will continue into the future,” Archbishop Zimowski said.

Climate change will affect the air, water and food supplies people depend on and aggravate “health problems that already exist,” including climate-related diseases.

“We must look beyond the purely scientific, medical and economic issues related to climate change and come face to face with the persons whom it most affects,” the archbishop said.

The world’s poor are the most vulnerable to climate change, he said, because they are the ones “who cannot afford protective structures to shield them from extreme forces of nature and who have little or no resources to arrange for temporary shelter and other basic necessities once their homes have been severely damaged or totally destroyed.”

“We therefore need to rethink the path we are traveling together,” he said.

NEXT: Priests in Libya say Catholics fearful as conflict escalates