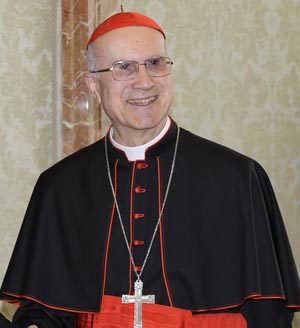 “No investigation of a criminal nature is being conducted by the Vatican magistrate involving Cardinal Tarcisio Bertone,” said Jesuit Father Federico Lombardi, Vatican spokesman, in a statement issued late May 20.

The German newspaper Bild had published a report the day before claiming an investigation had been launched into a 15-million-euro (about $20.5 million) loss resulting from an arrangement with Lux Vide, an Italian producer of television programs and films, mostly of a religious nature.

At the time the arrangement was made, Cardinal Bertone was president of the cardinals’ commission overseeing the Institute for the Works of Religion, commonly called the Vatican bank. In mid-January, Pope Francis replaced Cardinal Bertone and another three of the five cardinals on the commission.

Speaking to several Italian media outlets May 20, Cardinal Bertone denied the Bild report and said the agreement the institute made with Lux Vide “was discussed and approved” by the bank’s commission of cardinals and its board of supervisors Dec. 4.

When Rene Brulhart, director of the Vatican Financial Intelligence Authority, presented his office’s report for 2013 to the press May 19, a Bild reporter asked whether an investigation had been launched into Cardinal Bertone’s role in the affair. Brulhart refused to “confirm or deny” the existence of an investigation and insisted he would answer no questions about specific financial transactions in the Vatican.