In Lourdes, military chaplains find a sacred space for healing 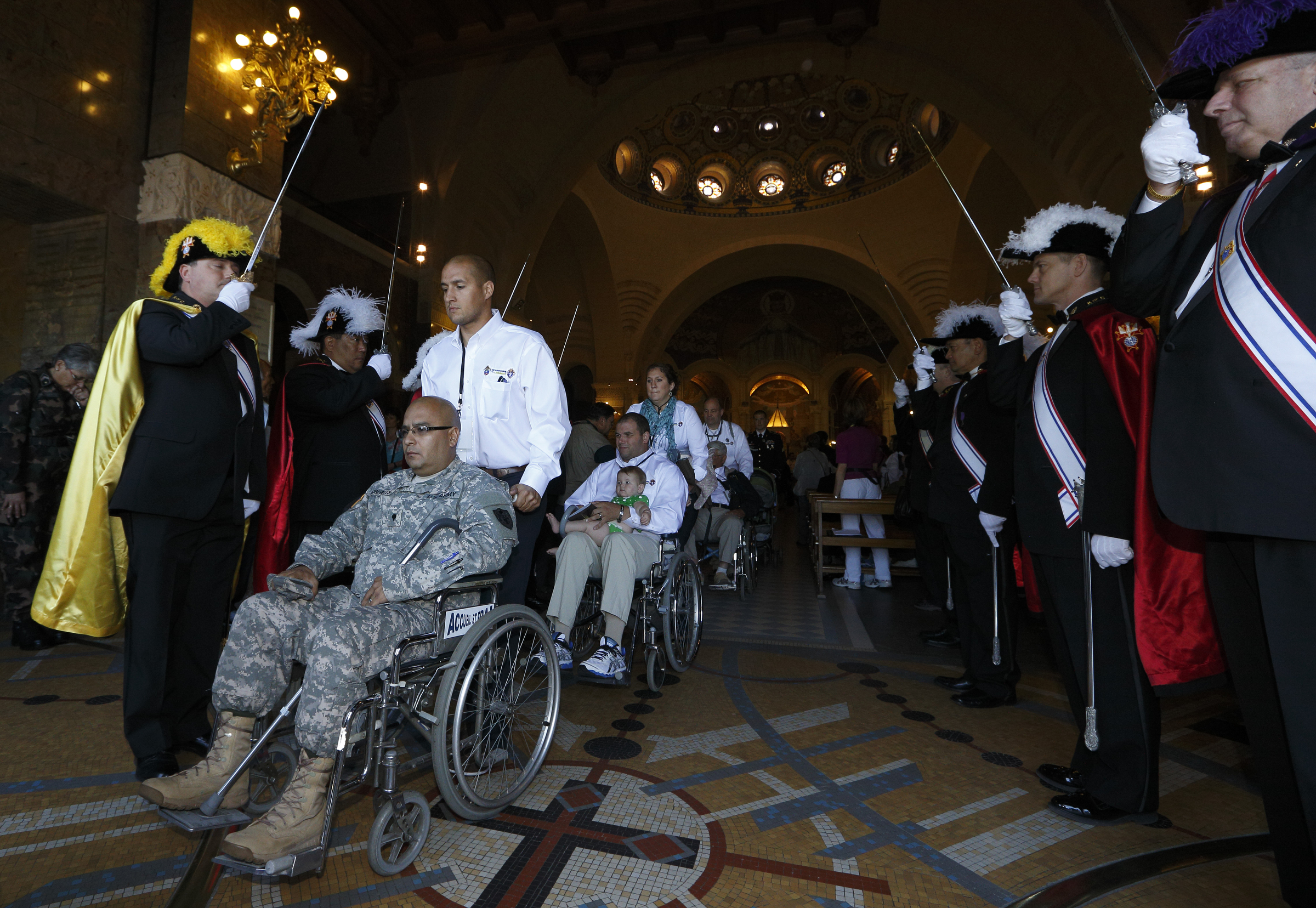 Members of the Knights of Columbus hold swords as U.S. military personnel leave in wheelchairs after a Mass at the Shrine of Our Lady of Lourdes in southwestern France May 16. (CNS photo/Paul Haring)

LOURDES, France (CNS) — Military chaplains are used to hitting the road and heading where the hurt is as they tour bases, camps and veterans clinics.

But on a recent pilgrimage to Lourdes with wounded soldiers, a group of Catholic chaplains also found a sacred space for healing.

The Shrine of Our Lady of Lourdes “is a special place for Catholics and for anyone who has faith. It’s a place where you can feel and experience prayer,” said Msgr. Frank Pugliese, one of the chaplains on the pilgrimage.

“I think this is truly a field hospital” where people experience inner spiritual healing as they reconnect with God and other people of faith, said the monsignor, who is the former vicar general of the U.S. Archdiocese for the Military Services and a retired military chaplain who served the naval forces for 21 years. He is currently helping two parishes in San Diego.

In Lourdes, “The healings that happen I think are amazing, not all of them physical,” he said.

“People have a sense of peace, of being loved, of being able to leave behind some of the baggage that they come with. And I think that’s sometimes a more powerful healing than if someone throws away crutches,” he said.

Msgr. Pugliese was one of more than a dozen Catholic chaplains who brought their unique pastoral expertise to a “Warriors to Lourdes” pilgrimage, where they accompanied about 60 retired and active duty U.S. military facing disabilities, together with family members, caregivers and support staff.

The May 13-19 pilgrimage, organized by the U.S. Archdiocese for the Military Services and the Knights of Columbus, offered an opportunity for prayer, healing and friendship in Lourdes — where Mary appeared to St. Bernadette Soubirous in 1858.

The monsignor said those who struggle with physical limitations are not marginalized at Lourdes.

“So many times in our society if you’re disabled, it’s like, ‘Get out of my way. I’m in a hurry.’ Here it’s a totally different experience,” he said. “They’re treated like they’re special” and receive privileged care and attention from residents, pilgrims and hospital staff.

Physical scars and disabilities aren’t the only dangers of combat. Many military men and women “are put in situations that are horrendous,” presenting chaplains with an entirely different set of pastoral challenges, he said.

“I see the church, and priests, as a place of coming back to a sense of purpose” where violence doesn’t define who these soldiers are. “Who they are is where they come to be at peace, like this” pilgrimage, he said.

The “Warriors to Lourdes” pilgrimage was part of the larger annual International Military Pilgrimage that saw 12,000 soldiers from 36 nations come together for a weekend of prayer May 16-18.

Such a large gathering joining military forces and peaceful prayer isn’t odd or incongruous, he said.

“I don’t think anyone goes into military service in any country to kill people. They do it to be a defensive force to preserve peace in their own nation,” he said.

Seeing so many, sometimes once-warring, nations come together, is a sign of how many armed service members “are dedicated to preserving peace in their own countries by service.”

Also, witnessing so many people from different countries and cultures united under one faith and one baptism “is a powerful experience in a Christian’s life.”

Msgr. Pugliese said that serving active duty men and women in the trenches and on military bases gives chaplains a unique opportunity to open the door to people who don’t or wouldn’t go to church.

“As military chaplains, we see the people who aren’t there all the time because we’re in their work centers, we’re everywhere they are so we get one-on-one contact” with people who have drifted from their faith, he said.

This privileged presence provides many opportunities to “just open the door to a little bit of catechesis,” to get dialogue going and foster deeper reflection, the monsignor said.

Father Dan Devore said he finds the same unique opportunities to reach out to those who are distant from the church in his ministry as a hospital chaplain at the U.S. Department of Veterans Affairs Medical Center in West Palm Beach, Florida.

Attending to veterans, their families and staff “is the best ministry I’ve ever had in my life,” said the 71-year-old priest of the Diocese of Bridgeport, Connecticut. “You can see how you help people on a day-to-day basis.”

Some are active Catholics, he said, “and you see real gratitude” in their faces for being able to receive the sacraments, despite being under long-term hospital care.

“Some have been alienated from the church, and you’re there as a friendly greeting, to say on behalf of the church, ‘Come on home,’ and to see what has separated them from the table of the Lord.”

“They get mad at God for one reason or another,” but the priest said he tells them that “no matter what, God still loves them and he forgives them. They just have to forgive God and themselves.”

People can be freed from the burden of sin and despair through the sacrament of reconciliation, he said.

“Some people have to drag that anchor around all their life. Can we forget it? No. But we don’t have to carry it. Just leave it there” with God, he said.

To help underline the importance of confession, Father Devore said he likes reminding people there are similar obligations with being in government service.

“I tell them, ‘The government gets a quarterly report. God should get at least that — a report (through confession) every three months on how you’re doing getting to heaven,” he said.

PREVIOUS: Soldiers lay down weapons for rosaries as they pray, pay homage to Mary

NEXT: Vatican denies criminal investigation of former secretary of state