When you pray, speak from the heart and ask God for help, pope advises 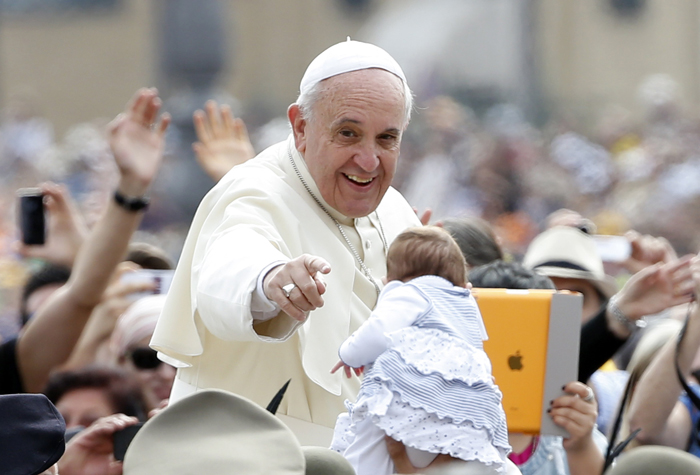 Pope Francis greets a baby as he arrives for his weekly audience in St. Peter's Square at the Vatican May 7. (CNS photo/Tony Gentile, Reuters) 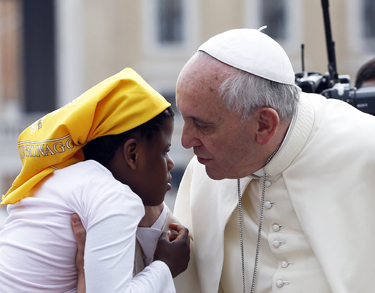 VATICAN CITY (CNS) — Never forget to pray, even while commuting, taking a walk or when waiting in line, Pope Francis said.

And don’t just stick to prayers memorized from childhood, but include heartfelt requests and pleas for help, advice and guidance, he said.

During his weekly general audience in St. Peter’s Square May 7, the pope continued a series of audience talks on the seven gifts of the Holy Spirit: wisdom, understanding, counsel, fortitude, knowledge, piety and fear of the Lord.

Looking at the gift of counsel, Pope Francis said people know how important it is to go to the right person — to “people who are wise and who love us” — to get the best advice, especially concerning difficult or “thorny” situations.

Through the Holy Spirit, God is there to enlighten people’s hearts and “help us understand the right things to say, the right way to act and the right road to take” when it comes to an important decision, the pope said.

By opening one’s heart to God, “the Holy Spirit immediately begins to help us perceive his voice and guide our thoughts, our feelings and our intentions” to be in harmony with God’s will.

Jesus becomes the reference point for modeling one’s behavior and finding the right way to interact with God and other people, he said.

The Holy Spirit helps people to grow in the virtues, to stop being “at the mercy of egoism” and to see the world and its difficulties with “the eyes of Christ,” he said. 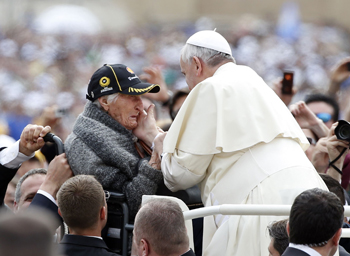 An elderly woman becomes emotional as Pope Francis greets her as he arrives for his weekly audience in St. Peter’s Square at the Vatican May 7. Members of the pope’s security lifted the woman in her wheelchair so she could meet the pontiff. (CNS photo/Tony Gentile, Reuters)

The Holy Spirit “enables our conscience to be able to make a concrete choice that’s in communion with God, and according to the logic of Jesus and his Gospel.”

But how can people make sure God is the one speaking to them and not their own biases, fears, limitations and ambitions? he asked.

The right counsel comes through prayer, he said.

“We have to give room to the Holy Spirit so that he can counsel us. And giving him room means praying, praying that he come and always help us.”

“Prayer is very important,” he said, and “never forget to pray, never!”

“Nobody can tell when we are praying on the bus, on the road, we pray in silence, with the heart, so let’s take advantage of these opportunities to pray.”

Don’t just recite the prayers “that we all know from childhood, but also pray with our own words, pray to the Lord: ‘Lord, help me, advise me, help me right now, let me know what we should do.'”

This gift of counsel can also come through other men and women of faith, who can help those in need recognize God’s will, he said.

To give an example, the pope told a story of an event, before he was pope, when he was hearing confessions at the sanctuary of Our Lady of Lujan in the province of Buenos Aires, Argentina.

“There was a huge line,” he said, and up next was “a big guy, all modern with an earring, tattoos, the whole nine yards, and he came to tell me something that had happened.”

The pope said the man had been going through something very serious and had asked his mother for help.

“That humble, simple woman gave her son the best advice that was spot-on,” the pope said, because she told her son to turn to Mary, who would tell him what to do.

The mother “had the gift of counsel,” he said, because she didn’t try to steer him with her own opinions, but pointed him in “the right direction.”

The man explained how he had prayed to Our Lady, who told him exactly what to do. “I didn’t have to say a word,” the pope said. “It was all the mother, Our Lady and the boy. This is the gift of counsel.”

The pope urged mothers in the audience: “You, moms, who have this gift, ask for this gift for your children, the gift of advising your children. It’s a gift from God.”

At the end of his catechesis, Pope Francis addressed several groups and associations in the crowd, including family members of young people living at the San Patrignano rehabilitation center in Italy — a home for those tackling substance abuse.

The pope said he joined their call for an end to illegal drug use. He said the audience was a good opportunity to “tell everyone simply: No to every kind of drug, OK? You can do it!”