Advocates pressing Congress on immigration as time runs out 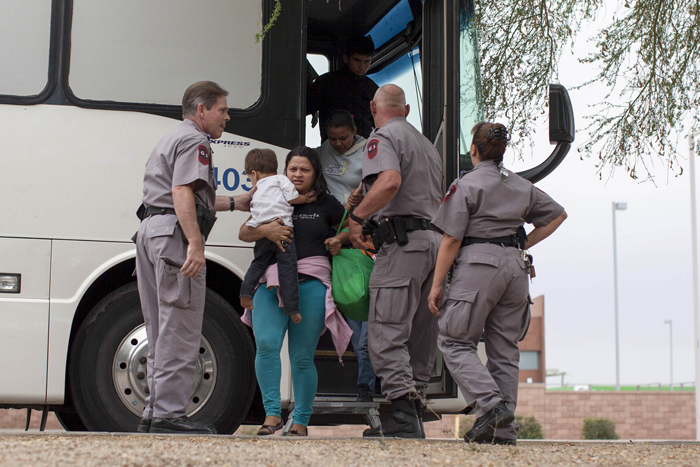 Migrants, consisting of mostly women and children, disembark from a U.S. Immigration and Customs Enforcement bus at a bus station in Phoenix May 29. Latin American and U.S. Catholic leaders are calling for greater protections for migrants, especially because of the record number of minors making the trip from Central America to the U.S. alone. (CNS photo/Samantha Sais, Reuters)

WASHINGTON (CNS) — Advocates for comprehensive immigration reform are reminding members of Congress that they will be held accountable at the polls if they fail before their summer recess to pass a bill that fixes the system.

From protest actions in congressional offices to prayer campaigns and statements, advocates have been targeting Republican members of Congress to take up and pass an immigration reform bill that has been languishing since the Senate approved it last June. With midterm elections looming in November, it’s considered extremely unlikely that Congress will take up any significant legislation after the summer recess.

In one statement, the president of the U.S. Conference of Catholic Bishops, Archbishop Joseph E. Kurtz of Louisville, Kentucky, June 5 asked the bishops to join him in offering the “prayers, works and joys” of their upcoming general assembly “for the intention that the human dignity of all immigrants be fully respected, that they may be treated, truly, as ‘brothers and sisters to be welcomed, respected, and loved,” as Pope Francis has said. The bishops will meet in New Orleans June 10-13.

He also called on political leaders to “reform our nation’s broken immigration system.” Archbishop Kurtz offered to work with members of Congress in reforming immigration laws “in a manner that properly balances the protection of human rights with the rule of law.”

A week earlier, half a dozen bishops held meetings with members of Congress to ask for their support for reform legislation.

Also in early June, advocates for reform staged rallies and civil disobedience protests in 28 congressional offices around the country, targeting 22 members of Congress. The members were being urged to pressure House Speaker John Boehner, R-Ohio, to allow the Senate immigration bill to come to the floor.

Boehner has said he would not bring the bill to a vote unless it has the backing of a majority of the Republican caucus. With the votes of nearly all Democrats assured, advocates say there are enough Republican supporters of the bill to guarantee it will pass if allowed to come to a vote in the House. The number of Republican supporters does not add up to a majority of the party’s caucus, however.

Meanwhile, the Department of Homeland Security announced the process by which young people whose deportation has been deferred under an administration program can extend their status. Secretary Jeh Johnson announced the agency would immediately begin accepting applications to renew the two-year deferrals granted to more than 560,000 young people who had been approved for the program as of April.

“Despite the acrimony and partisanship that now exists in Washington, almost all of us agree that a child who crossed our border illegally with a parent, or in search of a parent or a better life, was not making an adult choice to break our laws, and should be treated differently than adult law-breakers,” said Johnson in the statement.

The first approvals of the program, Deferred Action for Childhood Arrivals, known as DACA, will expire in September. New applications are still being accepted. The program was created by the Obama administration as a stop-gap measure to allow one category of immigrants who are in the country without permission to come out of the shadows and work legally.

President Barack Obama has said that if Congress fails to pass a reform bill, he would consider more administrative steps to assist other categories of immigrants without documents. Johnson was asked by Obama this spring to investigate what other actions he might take.

DACA is available to people who were brought to the U.S. as children, have clean criminal records, were under age 30 when the program started and who meet other criteria. Those approved are given Social Security numbers and work permits and are supposed to be protected from deportation as long as they continue to live within the law. The rules for the program state that information gathered to prove the applicants’ status may not be used against other members of their families, or against them if they are not approved for the program.

NEXT: Campaign for debt relief gains momentum, allies in the Vatican