Campaign for debt relief gains momentum, allies in the Vatican 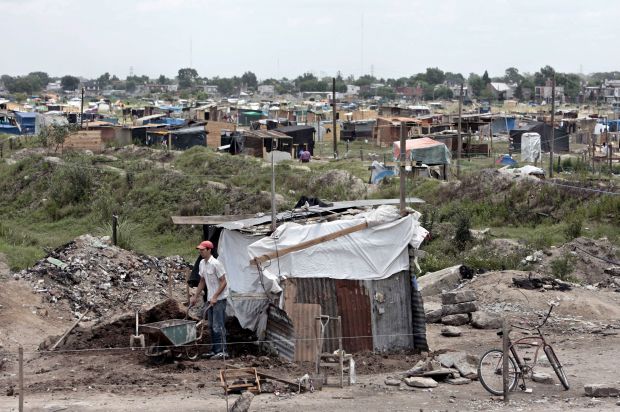 A man walks next to his makeshift home in 2008 in Buenos Aires, Argentina. Lawyers for Argentina have asked the U.S. Supreme Court to hear its appeal in a lawsuit that could affect how the country is able to fund development and human services programs or pay off massive loans that were purchased by a U.S. hedge fund. (CNS photo/Cezaro De Luca, EPA)

WASHINGTON (CNS) — A Washington-based organization and its worldwide partners working to carry on the biblical principle of jubilee have gained the attention of the Vatican.

Representatives of Jubilee USA Network and its partners discussed the need for debt relief for poor countries and international financial reform for 90 minutes May 21 in the Apostolic Palace with Cardinal Pietro Parolin, Vatican secretary of state, and Cardinal Peter Turkson, president of the Pontifical Council for Justice and Peace.

Eric LeCompte, Jubilee USA’s executive director, and others, including Father Sean Doggett of the Diocese of St. George’s in Grenada, also explained their work during a brief audience with Pope Francis.

LeCompte told Catholic News Service that both cardinals expressed support for the jubilee campaign. He said he expects the pope will continue to speak on the need for just financial systems and economies that respect the dignity of people.

“It was wonderful that were received and could thank the Holy Father for his outspokenness,” LeCompte said.

Stressing the need for debt relief and financial market transparency and inclusivity has been the focus of Jubilee USA’s work since its establishment by religious organizations, including the U.S. Conference of Catholic Bishops, in 1997. LeCompte and his colleagues say financial systems must serve, protect and promote participation in financial decisions by the world’s most vulnerable people.

The message has reverberated across religious lines as well as the jubilee movement has seen Muslims and Jewish organizations join the call for a leveling of the financial playing field.

As it currently operates, the international financial system limits the role of poor countries in financial decision-making. As a result, LeCompte explained, the large loans held by some of the world’s poorest countries hinder development because repayment plans have strict requirements; if economic growth does not occur a country may be forced to limit spending on vital human needs in favor of paying off their loans.

Those concerns led to the development of a modern-day jubilee. The USCCB continues to support the jubilee movement.

“These policies and approaches we understand to also be consistent with Vatican policies,” said Richard Coll, foreign policy adviser on Latin America and global trade at the USCCB. “Many statements by the Pontifical Council on Justice and Peace and other Vatican organizations have stressed the need for lightening the debt burdens for heavily indebted countries and thereby improving the conditions for citizens of those states.”

While its work is based in biblical principles, Jubilee USA has been able to argue for fairness and justice in terms the financial industry can understand. LeCompte and others have taken the message to the White House, the United Nations, the International Monetary Fund and business leaders worldwide.

The jubilee network’s message focuses on the needs of poor people, those who are most adversely affected when markets and monetary transactions are aimed at maximizing profit for those overseeing financial systems.

“But from a biblical sense the concept of jubilee is a core concept of our biblical history, coming from Deuteronomy and Leviticus,” he said.

In the Book of Leviticus, a jubilee year is declared every 50 years during which people are able to return to their land and slates are wiped clean as sin and debt are forgiven.

Jubilee USA has built a U.S. coalition that includes 75 national organizations and 400 religious communities. It partners with another 50 international groups.

Among its newest partners is the Jubilee Caribbean Debt Network, which has evolved largely from the faith community in the region including several Catholic dioceses. Adding the Caribbean island nations to the campaign provides a boost to debt relief efforts, LeCompte said. Some of the world’s most heavily indebted poor countries, including Grenada, are in the region, according to the IMF.

“The importance of the Caribbean Debt Network is to create awareness region wide that the debt is not simply a matter for the government. Everybody is affected by it,” said Father Doggett, a member of the St. Patrick’s Missionary Society and a parish priest in Grenada who works on debt relief for the Catholic Church in the tiny country.

The church’s role has been welcomed by Grenadian officials as they work to restructure the country’s debt payments. Father Doggett said he fears that without debt restructuring taxes will increase and government spending on social services will drastically decline.

Argentina offers one example of the uphill climb heavily indebted countries face. South America’s third most populous nation has defaulted on its loan payments and subsequently was sued by the hedge fund firm NML Capital. The fund wants to access information on Argentina’s U.S. bank holdings and has won in both in U.S. District Court and in the U.S. Court of Appeals. Argentina has resisted the requests and has asked the U.S. Supreme Court to hear the matter.

Debt relief advocates call companies like NML Capital “vulture funds” because they swoop in to buy up debt for pennies on the dollar and then sue for full repayment. Some of the claims result in huge profits for the funds.

Jubilee USA, in an amicus curiae brief, asked the Supreme Court to take the case. The court was scheduled to discuss the petition June 12 and decide by the end of June whether to hear full arguments.

The case could shape the future of debt relief restructuring. If the Supreme Court decides not to hear the case or eventually rules against Argentina, LeCompte fears that the floodgates could open for other hedge funds to go after the assets of defaulting countries.

If it hears the case, the court could decide in Argentina’s favor, limiting the reach of hedge funds and allowing countries to use the loans they obtained for wider human development.

PREVIOUS: Advocates pressing Congress on immigration as time runs out