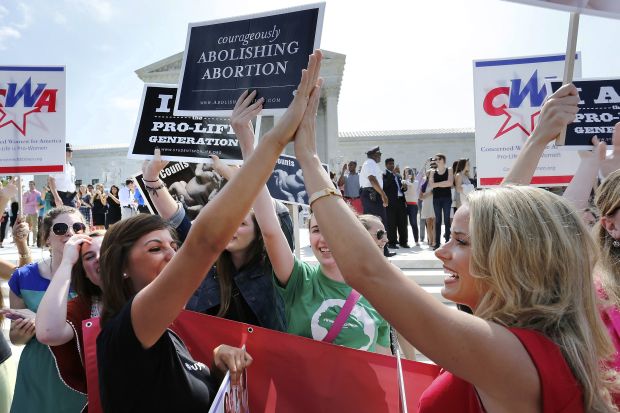 Pro-life demonstrators celebrate June 30 outside the U.S. Supreme Court in Washington as its decision in the Hobby Lobby case is announced. (CNS photo/ Jonathan Ernst)

UPDATED — WASHINGTON (CNS) — In a narrowly tailored 5-4 ruling, the Supreme Court June 30 said closely held companies may be exempted from a government requirement to include contraceptives in employee health insurance coverage under the Religious Freedom Restoration Act.

The court said Lancaster, Pa.-based Conestoga Wood Specialties and Hobby Lobby craft stores, the two family-run companies that objected to the government mandate that employees be covered for a range of contraceptives including drugs considered to be abortifacients, are protected from the requirement of the Affordable Care Act.

But the court also said government requirements are not necessarily void if they conflict with an employer’s religious beliefs.

The decision may have a major effect on the Archdiocese of Philadelphia’s objection to the HHS mandate and the church’s concerns over religious freedom.

After the archdiocese lost its bid for an injunction to grant relief from the mandate taking effect July 1, an appeals court issued a stay and told lawyers for the archdiocese June 28 to review the Supreme Court’s decision June 30 before filing a new appeal by July 9.

Although the archdiocese qualifies as a religious employer and thereby enjoys an exemption from providing the coverage to its employees, its 16 social service and health care agencies organized under Catholic Charities were to face penalties of $100 per each beneficiary for each day of non-compliance beginning July 1.

With 1,600 beneficiaries, Catholic Charities’ fines would amount to $160,000 per day. In only six months, the fines would reach nearly $1 million.

Archbishop Charles J. Chaput called the Supreme Court’s decision “heartening,” and said it “appears to reaffirm the founding fathers’ vision of a country where religious believers may live out their convictions in everyday life without undue government interference or coercion.

“On behalf of the charitable entities affiliated with our archdiocese and the archdiocese itself, we hope that today’s decision will have a positive impact on our own pending litigation related to the HHS mandate,” he said. “In our country, no person and no organization grounded in religious conviction should be forced to choose between complying with the law and violating their religious beliefs.”

The Catholic bishops of Pennsylvania said in a statement June 30 that religious ministries “such as charities, schools, health care facilities and institutions of higher education — are given, at best, second-class status under the law in the form of a still-murky ‘accommodation.’ Many religious entities, including Catholic dioceses, are challenging this mandate in federal courts across the country.”

The bishops hoped that in light of the Supreme Court’s ruling “the Obama Administration will do the right thing and withdraw the mandate as it has been applied to religious ministries. That step will bring to an end litigation which religious ministries were forced to undertake to protect their religious conscience and to assure that statutory and constitutional protections would not be trampled.”

The Supreme Court’s ruling is not a slam-dunk for all entities that oppose the contraceptive mandate for religious reasons. The court noted that cases challenging the mandate for nonprofit entities, such as Catholic colleges and faith-based employers, are pending and that the June 30 ruling doesn’t consider them.

The decision also did not delve into whether the private employers have religiously motivated protection from laws under the First Amendment.

It said the government failed to satisfy the requirement of RFRA, a 1993 law, that the least-restrictive means of accomplishing a government goal be followed to avoid imposing a restriction on religious expression.

The majority opinion said the ruling applies only to the contraceptive mandate and should not be interpreted to hold that all insurance coverage mandates — such as for blood transfusions or vaccinations — necessarily fail if they conflict with an employers’ religious beliefs.

Justice Samuel Alito wrote the majority opinion, which was joined by Chief Justice John Roberts and Justices Antonin Scalia and Clarence Thomas. Justice Anthony Kennedy wrote a separate concurring opinion, which agreed with the ruling, but made clear that while the opinion applies to the particular companies involved in this case, it’s not a sweeping condemnation of the key elements of the contraceptive mandate itself.

“It is important to confirm that a premise of the court’s opinion is its assumption that the HHS regulation here furthers a legitimate and compelling interest in the health of female employees,” wrote Kennedy in his concurrence.

He went on to say that the federal government failed to use the least restrictive means of meeting that interest, pointing out that it has granted exemptions from the mandate for employees of nonprofit religious organizations.

“That accommodation equally furthers the government interest, but does not impinge on the plaintiff’s religious beliefs,” he wrote.

In the 49-page majority opinion, Alito noted that the department of Health and Human Services that administers the ACA has already provided exemptions from some of the coverage requirements for employers in a variety of situations, including some that were grandfathered in without certain provisions and employers of fewer than 50 workers.

He also said that the standard for the government of meeting a general good by the least restrictive means is “exceptionally demanding,” and that the contraceptives provision fails to meet it. The federal government could easily, and relatively inexpensively, cover the cost of providing the disputed contraceptives coverage, Alito said.

And he said the federal government already has a system for handling the mandate for nonprofit religious organizations with objections to the mandate.

Under that accommodation, organizations self-certify that their religious objections entitle them to exemption from the mandate. In those cases, third party insurers arrange for the provision to be handled without involvement or cost to the employer.

Alito specified that the opinion does not decide whether the accommodation approach complies with RFRA for all objections. “At a minimum, however, it does not impinge on the plaintiff’s religious belief that providing insurance coverage for the contraceptives at issue violates their religion, and it serves HHS’s stated interests very well.”

Alito also noted that the opinion should not be understood to mean any religion-based objection to a requirement of the ACA would be upheld. Different issues would arise, for instance, in the case of objections to vaccinations that protect public health, he said.

In a dissent, Justice Ruth Ginsburg called the court’s decision one of “startling breadth” allowing commercial enterprises to “opt out of any law” except tax laws that they “judge incompatible with their sincerely held religious beliefs.”

Ginsburg, joined by Justices Elena Kagan, Sonia Sotomayor and Stephen Breyer, said she was “mindful of the havoc” the ruling could produce and noted that the court’s emphasis on RFRA failed to take into account the impact the decision would have on “third parties who do not share the corporation owners’ religious faith.”

“Until today,” she wrote, religious exemptions have not been extended to the “commercial profit-making world” because these groups do not exist to foster the interests of those of the same faith, as religious organizations do.

“The court’s determination that RFRA extends to for-profit corporations is bound to have untoward effects,” she said, adding that even though the court “attempts to cabin its language to closely held corporations, its logic extends to corporations of any size, public or private.”

As a result, she said, “RFRA claims will proliferate.”

Contributing to this story was Carol Zimmermann.