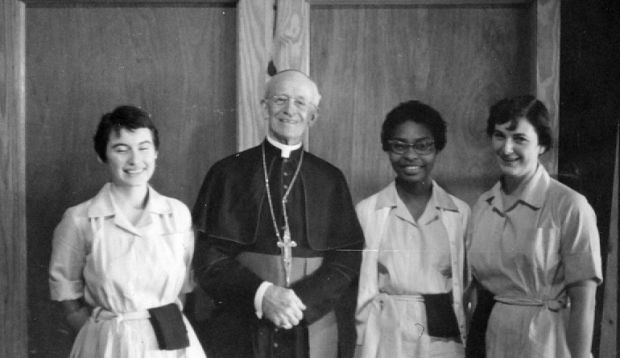 Mississippi Bishop Oliver Gerow is pictured in this 1960 photo with members of Pax Christi in Greenwood, Miss. Bishop Gerow, head of the Diocese of Jackson, Miss., from 1924 to 1967, steered Catholics in the state through some of the darkest days of the civil rights movement. He released a statement urging lawmakers to support the Civil Rights Act of 1964, signed into law by President Lyndon B. Johnson July 2 of that year. (CNS photo/courtesy Diocese of Jackson Archives)

WASHINGTON (CNS) — Catholic leaders supported the Civil Rights Act of 1964 and also urged Catholics to get behind the law to make it work, according to the yellowed pages of typewritten articles in the Catholic News Service’s archive folders.

The reaction piece of July 3, 1964, the day after the legislation was signed into law by President Lyndon Johnson — and additions to the story in subsequent days — quotes several Catholic bishops and lay leaders rallying behind the legislation that prohibited racial segregation in schools, workplaces and public facilities.

Los Angeles Cardinal James F. McIntyre called the law a “concrete expression of the conscience of all men of good will” that has been the “concern and work for the church for many long years.” And Washington Archbishop Patrick A. O’Boyle, who integrated Catholic schools in the Washington Archdiocese 16 years before the Civil Rights Act, described the legislation as a “tremendous national step forward.”

Putting the law back in the hands of American citizens, Atlanta Archbishop Paul J. Hallinan warned that if the civil rights law was “evaded or flaunted, both sides will lose and Georgia and the American nation will suffer.”

Similarly, Msgr. George Higgins, director of the social action department of the National Catholic Welfare Conference, a predecessor to the U.S. Conference of Catholic Bishops, said the act will be “of little avail unless the great mass of American people are prepared to go beyond the letter of the law and to help create an atmosphere of mutual understanding and racial brotherhood in their neighborhoods and communities.”

And in a joint statement issued July 3, 1964, the bishops of Louisiana urged Catholics not just to obey the letter of the law but to “heed the voice of their conscience in observing its spirit.” They also stressed the need to “put aside hatred, agitation, repression and any other extremes.”

Similarly, Bishop William G. Connare of Greensburg, Pennsylvania, urged a group of Catholic laymen to be “in the vanguard” of those making sure the law was obeyed.

Frank Heller, president of the National Council of Catholic Men, certainly did not need prompting about this. He said the new law put the nation “on the verge of a ‘release from racism.'” But he also warned Americans not to let the new law “atrophy into a meaningless gesture.”

“Future generations will live in shame if this becomes for history merely ‘one brief shining moment’ when this nation gave witness to the dignity of all her citizens,” he said.

An NCWS News Service story from July 2, 1964, said churches played a major role in “tipping the scales” in favor of passage of the Civil Rights Act by actively supporting it from the time President John F. Kennedy spoke of plans to introduce it in 1963 and the year plus that it was debated and voted on in Congress.

On Aug. 23, 1963, the U.S. bishops issued a joint statement on racial harmony; five days later seven Catholic bishops took part in the March on Washington for Jobs and Freedom. In the months after the historic march, churches continued to urge support for equal rights in housing, employment and schools though demonstrations, sit-ins, prayer services and convocations.

Sen. Hubert Humphrey, D-Minnesota, who managed the civil rights bill on the Senate floor, repeatedly stressed that church support of the legislation was crucial.

In a graduation speech more than a month before the act was passed, he said credited churches for “turning the tide on civil rights legislation.”

“The moral issue has been recognized; the responsibilities have been felt,” he said.

PREVIOUS: Reflections on Civil Rights Act: Progress made, work still to do