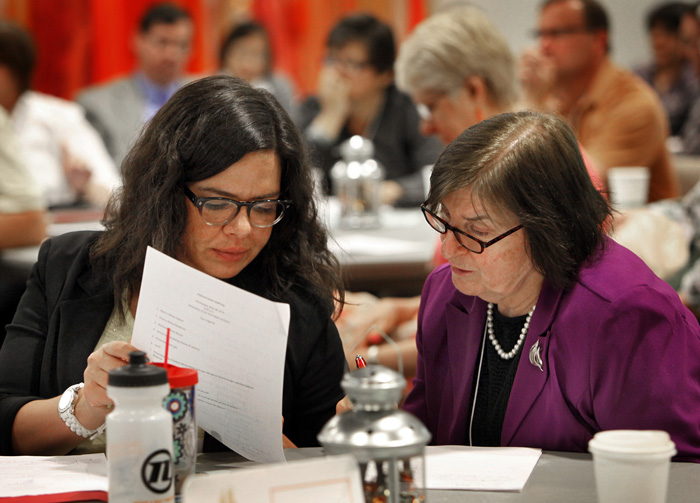 Samantha Almanza, from the Diocese of Salt Lake City, points out something to another participant May 30 during the 38th annual National Association of Lay Ministry's conference at Catholic Theological Union in Chicago May 30. About 130 people attended the three-day conference, which centered on the theme, "The Fire Within," looking at what gives people their passion and fire for ministry. (CNS photo/Karen Callaway, Catholic New World)

CHICAGO (CNS) — The need for more Catholics to become involved in lay ministry — particularly younger Catholics — was on the minds of many at the National Association of Lay Ministry’s annual conference held May 27-31 at Catholic Theological Union in Chicago.

About 130 people attended the three-day conference, which centered on the theme, “The Fire Within,” looking at what gives people their passion and fire for ministry.

Carol Walters, the association’s newly elected chairperson and director of the Office for Lay Ecclesial Ministry for the Archdiocese of Chicago, said one of the challenges in lay ministry today is a need for resources for formation and resources for jobs when people graduate from formation programs.

“The biggest thing right now is we have people that are interested in formation that want to participate in our formation programs, but they’re not sure that they want to commit to that because of the lack of jobs that are on the other side,” she said. “We need a next generation of ministers to take the place of folks that are in parishes right now.”

If they don’t believe they will find jobs when they finish formation programs, these potential ministers will find other things to do, she said.

Collaboration will help with this issue, not just on the local level inside parishes, but also within clusters of parishes working together and with dioceses and national associations.

“At the present time, the voice gets splintered with the groups. So there has to be a renewed effort of collaboration among those groups so that the voice can be unified,” she said.

Helping younger Catholics discern the call to become lay ministers was the focus of Paul Jarzembowski’s workshop. Jarzembowski, who is the coordinator of youth and young adult ministries for the U.S. Conference of Catholic Bishops, said that only 18 percent of lay ministers today are under the age of 40.

Church-going college students are interested in serving the church, but they aren’t always invited to or know all that is available to them in lay ministry. When they do serve, Jarzembowski noted that there can be some tension between how the older generations minister and how the younger generations minister, which calls for a understanding on both sides.

In the end, if lay ministers are excited about their own ministry, that can attract younger people to ministry, he said.

David Amico, director of lay ministry formation for the Diocese of Albany, New York, agreed about the excitement factor in attracting new ministers. And there is no shortage of need for them, he said.

Amico cited his own Diocese of Albany, which is a largely rural and has many people who need to hear the Gospel message.

“No one of us can do it alone. Priests can’t do it alone, bishops can’t do it alone, deacons, lay ecclesial ministers. So we need one another to bring all the gifts to bear so that we can reach those margins that Pope Francis is calling us to reach,” Amico said. “So it’s all hands on deck.”

NEXT: Detroit Catholics give high marks to parishes, voice concerns for future