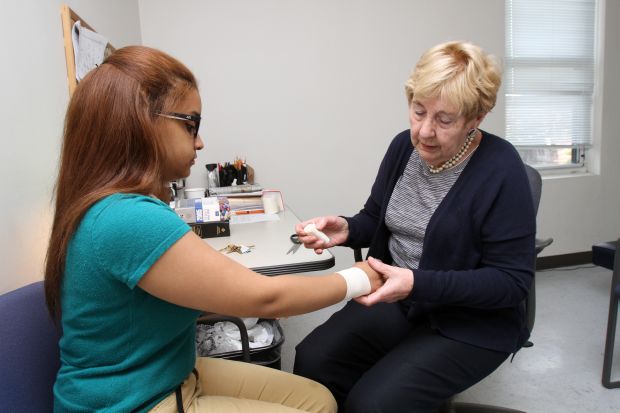 “As far as I’m concerned, every time a child comes through the door, I’m experiencing God,” she said.

That sentiment might be rare among all workers and especially those who deal with teenagers near the end of a stressful school semester. But Ashcroft is a retired clinical nurse manager who has found unexpected joy offering what she calls “no-frills medicine” in eight years as the volunteer nurse at Cristo Rey New York High School in Harlem.

“If they’re hungry, I’ll feed them. If they’re tired, I’ll have them sleep. If they need to talk, I’ll listen to them. A lot of it is plain nurturing and some triaging,” she said.

Ashcroft is a member of the Ignatian Volunteer Corps, a national service organization that places retirees with community groups that serve the poor. The Jesuit-run program includes prayer and guided reflection based on “The Spiritual Exercises of St. Ignatius Loyola,” founder of the Jesuits.

“I don’t have children. I don’t especially like children. But I came here and, God, I love these teens. They are always fascinating and always a gift. My life has changed completely” — volunteer Mary Ashcroft, 72, on her placement with high school teenagers.

The Baltimore-based organization has 465 retirees working with more than 400 partner groups in 20 cities, according to Mary McGinnity, executive director. It was founded in 1995 by two Jesuit priests who were challenged by parents of Jesuit novices to develop opportunities for older adults to minister to the materially poor while gaining spiritual growth through service.

“People join the IVC to serve, but they stay because it’s a spiritual program that builds community. It gives a depth of support that strengthens the spirit,” McGinnity told Catholic News Service.

Volunteers meet monthly for prayer and discussion and make three retreats together each year. Each is also paired with a spiritual “reflector” who helps them to connect their volunteer experiences with the Gospel message.

“When I started out, I wanted to do some volunteer work and I didn’t think in terms of the spiritual side, but once I got going, I felt a need for it,” said John Lundy, a former international steel trader. He volunteers at Mercy Center in the Bronx, where he shepherds five pre-teen boys through an after-school program and then teaches English as a Second Language to 17 adults.

Volunteers make a commitment to serve two days a week 10 months a year. McGinnity said so many renew their commitment year after year that the partner organizations are able to develop programs based on their tenure.

The national demographic favors growth in the Ignatian Volunteer Corps, she said. Boomers are reaching retirement age at the rate of 10,000 a day and studies suggest most plan to stay active. “It’s a generation that has service in its mindset and a generation that was spiritually developed in Vatican II with a focus on living out our faith in the world,” she said.

Volunteers range in age from early 50s to 80s and are characterized by vibrancy and a desire to learn, grow and make a difference, said Mary Ellen O’Driscoll, the corps’ New York-area director. Recruiting in the area has been driven by “Jesuit word of mouth” and outreach at two Manhattan parishes, St. Francis Xavier and St. Ignatius Loyola, she said.

Volunteers Ashcroft and Lundy both answered an ad in the bulletin of St. Ignatius Loyola. Lundy, a 66-year-old Vietnam veteran, said he envisioned himself working with fellow veterans, but there were no compatible opportunities through the corps’ partners.

The Queens native is clearly in his element at Mercy Center, a comprehensive community resource program associated with the Sisters of Mercy. He helps his young charges with their homework and takes them to a park, “but it’s really more just being there. I’m a father and I’ve been a Little League coach, so I relate to them as a guy,” Lundy said. Blue eyes twinkling, he added, “They call me, “Papa John.”

Lundy is not fluent in Spanish, but he relates well to his adult students in English class. “They’re good people working very hard, long hours at jobs that pay very little money. Most have several jobs just to keep on top of it and then they show up to learn English,” he said.

From military service, “I know what it’s like to be in a foreign country and not understand what’s going on and to try to communicate. And there are a lot of similarities here to the Army, which is made up of many poor people. I’ve lived with the GIs like brothers and I feel comfortable with the poor. Even though I’m not poor, I feel spiritually one with them.”

Ashcroft retired at age 72 from a high-stress career in the bone marrow transplant unit of Mount Sinai Hospital. “Retirement’s not the nicest word. It sounds like the last stop before you die. I prefer, ‘a change in direction,'” the British widow said.

She was prepared for hands-on work with the Ignatian Volunteer Corps and pictured herself in a soup kitchen. But she was asked her to become a nurse at Christo Rey, one of a national network of 26 Catholic, coed, college-prep schools dedicated to the education of motivated teens from low-income families. She recalled with a laugh what an unexpected placement it was. “I don’t have children. I don’t especially like children. I’m not a mothering type and little babies don’t make me coo,” she said.

“But I came here and, God, I love these teens. They are always fascinating and always a gift. It’s absolutely amazing to watch them. My life has changed completely,” she said.

The wall above her desk in the sunny nurse’s office is decorated with photos of students and alumni. “I can identify with these people,” Ashcroft said. Like her, they are the first in their families to head to college.

Ashcroft’s volunteering is somewhat puzzling to her family in England, many of whom have drifted from the Catholicism of their childhood. “They all think I’m absolutely nuts. If I talk about the Jesuits, they probably think I’m standing on a street corner in a saffron gown, asking for money!”

“It’s truly a privileged life, you know. The Jesuit influence has really changed me. I’m not attached to ‘stuff’ since I’ve been part of the Jesuit community and that’s the greatest gift we can have. I miss the community of faith when I’m overseas,” she said.