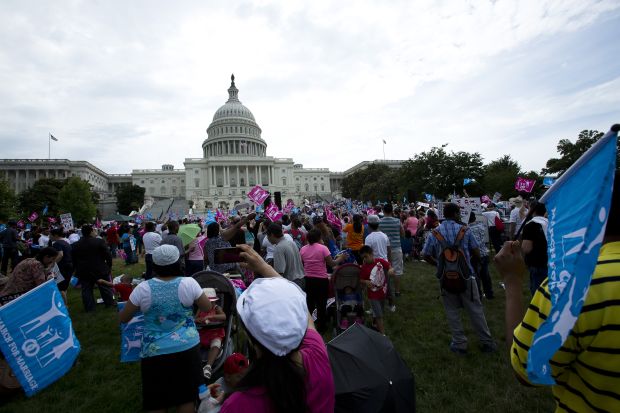 Supporters of traditional marriage wave flags and signs on the West Lawn of the Capitol in Washington June 19 at the second annual March for Marriage. Several hundred participants walked from the National Mall to the U.S. Supreme Court where they heard speakers express support for marriage between one man and one woman. (CNS photo/Tyler Orsburn)

Referencing the passage from the Gospel of Matthew, “Love your enemies and pray for those who persecute you,” Archbishop Salvatore J. Cordileone of San Francisco, chairman of the U.S. bishops’ Subcommittee for the Promotion and Defense of Marriage, encouraged march participants June 19 to spread the message of the Gospel with love.

“It is easy to become resentful when you are relentlessly and unfairly painted as a bigot, and are punished for publicly standing by the basic truth of marriage as a foundational societal good,” Archbishop Cordileone told a crowd of several hundred. “It is tempting to respond in kind. Don’t. We must not allow the angry rhetoric to co-opt us into a culture of hate.”

Co-sponsored by the National Organization for Marriage and the Family Research Council, the March for Marriage brought grass-roots activists to the U.S. Capitol to illustrate that a “majority of Americans still stand for marriage” as the union of one man and one woman, according to event organizers.

Citing traditional marriage as “the key to individual and societal flourishing,” Archbishop Cordileone explained the importance of creating a culture of marriage within the U.S.

“Our society is broken and hurting in so many ways,” the archbishop said. “But none of the solutions will have a lasting effect if we do not rebuild a marriage culture, a culture which recognizes and supports … marriage between a man and a woman committed to loving faithfulness to each other and to their children. No justice, no peace, no end to poverty is possible without a culture of marriage and the family.”

Rick Santorum, a former Republican senator from Pennsylvania, advocated for the dignity of all people as he explained that the movement in favor of traditional marriage “isn’t about hating anyone or anything.”

“This is a movement that is based in love for what is best for children and families in America,” Santorum said. “People from across the ideological spectrum will all admit that marriage between a man and a woman is best for raising children and building strong communities. We need to help rebuild marriage of men and women … with respect for all people.”

Highlighting procreation as one of the key differences between a romantic relationship and a marriage, the former senator urged participants to become involved in the movement to “reclaim marriage for what it truly is.”

As the crowd prepared to march to the U.S. Supreme Court building, Archbishop Cordileone encouraged the event’s participants to allow love to guide their future efforts in the movement.

“This noble cause is a call to love for us, a call we cannot abandon that … in the end, we know will triumph,” he said. “So my friends, we must not give up. The truth will not go away and we will not go away. Let us place our trust in God and let us go forth to build a civilization of truth and love.”

PREVIOUS: Media urged to focus on God, be friends of Jesus and one another

NEXT: Catholic media urged to bring fresh energy, compassion to their work