Speakers urge bishops to continue mission to families, those in need 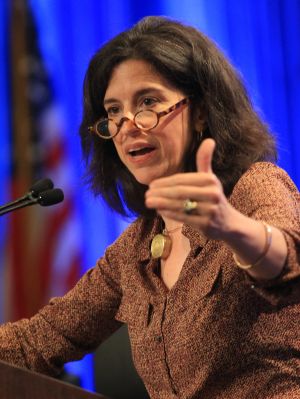 NEW ORLEANS (CNS) — Speakers addressing the U.S. bishops on the second day of their spring general assembly in New Orleans urged them to continue their ministry of caring for those in need — even as they face obstacles — and to reach out in a special way to couples and families.

Helen Alvare, law professor at George Mason University School of Law in Arlington, Virginia, told the bishops June 12 that significance of linking service to those in need with the church’s new evangelization efforts may have “arrived just in the nick of time” particularly as the church faces challenges to its service ministries from new government regulations.

Alvare, who is also a consultor for the Pontifical Council for the Laity, didn’t specify the challenges in her address, but the audience was keenly aware of them, particularly as dioceses and Catholic organizations are in the middle of lawsuits seeking relief from the federal mandate that most employers cover contraceptives in their employee health plans.

One of the bishops asked Alvare about carrying on the church’s charitable work with the Health and Human Services contraceptives mandate, which is being fought in the courts by many Catholic and other religious employers. She responded that the country’s “fixation with constitutional freedom of sexual expression has put us in difficult place” because it “makes the church appear as group asking for special exemptions when the government is offering freedom and equity.”

She added that it is “getting difficult to partner” with the government, when church agencies have always believed that partnership was an important way to meet the needs of the poor. “Part of me worries,” she said, that people will seek charity services without the church “even though we do it and do it well.”

She said the church needs to continue to lobby to “make sure laws don’t exclude us, show that what we do is good and show our grass-roots support.”

In her presentation, Alvare urged the bishops to continually bring Jesus to those they minister to and to act as he did, making time for people and having personal interaction with them, citing examples of how Pope Francis has certainly modeled these actions. She also noted that those in need of care include not just the material poor but those in spiritual and moral poverty.

Alvare said the bishops can link their works of charity with the call for a new evangelization by celebrating Masses in prisons or at the country’s borders and also by reaching out to people where so many of them are — on the Internet.

Brad Wilcox, associate professor of sociology and director of the National Marriage Project at the University of Virginia in Charlottesville, spoke about the impact today’s economy has on marriages. Citing numerous studies, he said the country’s poor were less likely to remain in stable marriages.

Wilcox, who spoke of the “growing class divide” of marriage in the U.S., said the “erosion” of marriages negatively impacts children who, according to studies, “are less likely to flourish.”

He noted that this is not always the case, pointing out that he was raised by a single mother.

But stressing the number of single-parent raised children who don’t go to college or end up in jail, he urged the bishops to pay close attention to this trend. “If you care about poverty, if you care about economic opportunity in America, you should care about marriage.”

Wilcox urged them to clearly articulate to Catholics the benefits of an “intact marriage” but also to “stand in solidarity with couples in crisis.”

The bishops planned to further discuss these issues in regional meetings closed to the media during the afternoon.