Texas diocese responds to immigrants’ need in surge of children 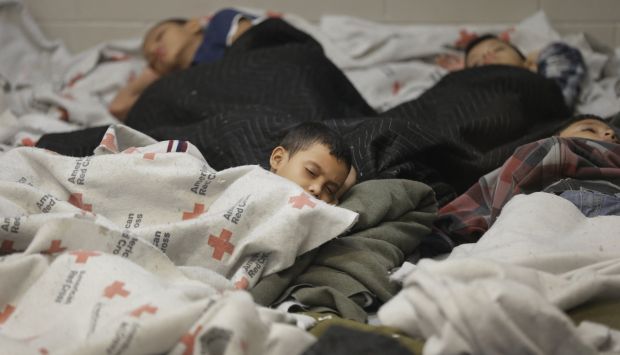 McALLEN, Texas (CNS) — Scared, tired and hungry, immigrants, mostly mothers with their children, have been arriving at the McAllen and Brownsville bus stations at odd hours.

Most hope to travel farther to connect with waiting family members.

They are among hundreds of immigrants — mostly from Honduras, El Salvador and Guatemala — arriving daily, dropped off by Immigration and Customs Enforcement agents after being apprehended in the United States.

Because of the vast number of families and children traveling on their own who have been picked up on the border, mostly in the Rio Grande Valley in Texas, ICE has been giving families permission to travel on to their final destination with instructions to appear in court for deportation proceedings.

More than 52,000 minors traveling alone and 39,000 families have been picked up this fiscal year. The number of children traveling alone has doubled over a year ago and is more than seven times the number that was typical annually through 2011.

For the past two months, volunteers acting on their own have been meeting immigrants at the bus station. They provide food and help the disoriented families navigate bus travel. As the numbers escalated, Catholic Charities of the Rio Grande Valley opened two assistance centers.

When they arrive at the bus station, “they are scared, they’re hungry, they’re tired,” said Sister Norma Pimentel, a member of the Missionaries of Jesus, who is executive director of Catholic Charities of the Rio Grande Valley. “They don’t know who to trust. They fear someone will take advantage of them.”

She said she told the people at the bus station, “Somos de la iglesia. Estamos aqui para ayudar.” (“We are with the church. We are here to help.”)

One center is at Sacred Heart Church, near McAllen’s bus station. Volunteers helped approximately 200 people the first day. A second center is in the gymnasium across the street from Immaculate Conception Cathedral in Brownsville, and a third is planned in Harlingen.

“The assistance centers are an immediate and temporary response to the need,” said Sister Pimentel. “A long-term solution is needed.”

She said false information circulating in Central America has contributed to the influx. Some are under the impression that they will receive asylum if they cross into United States with their children, for example. Asylum is a status available to people who have a credible fear of persecution or physical harm in their homelands.

Being released by ICE with orders to appear in immigration court is confusing to some, said Sister Pimentel. “They think they are being offered amnesty.” In reality, the immigration agency “is giving themselves space to breathe” because it is overwhelmed by the number of children and families being detained in the area.

One young man in his early 20s arrived from Guatemala with his infant child. His wife had been kidnapped in Mexico and he was he forced to continue without her.

Another, Roger (his last name has been withheld for his safety), 14, is a U.S. citizen who was living with his aunt in Miami. He flew to Honduras to accompany his mother as she crossed illegally into the United States.

He said it took them four tries before they finally crossed the Rio Bravo in the dark. He said he would do it again.

Another teen, a 16-year-old from the department of Morazon, El Salvador, spent four days lost in the Rio Grande Valley, drinking dirty water and eating oranges to survive before he found help. He was left on his own by smugglers who were paid $3,000 to get him into the United States.

The oldest of five children, Juan was sent north by his parents, who wanted him to get an education. As the youngest of the 11 young men who were traveling in an enclosed truck, he said he was hit and teased. He told The Valley Catholic, newspaper of the Brownsville Diocese, that he had not had anything to eat or drink during that trip.

He was found on the side of the road and brought to the assistance center at Sacred Heart. There, after a 19-day journey, he contemplated whether to turn himself in to Immigration and Customs Enforcement or figure out a way to get to New York to the uncle who was waiting for him.

Sister Pimentel said she and the other volunteers are inspired by the response from the community.

As soon as the call for donations went out, people started bringing needed items to the center. One business donated 600 pairs of new shoes. Others have provided portable showers.

Some of the immigrants have gone weeks without a shower or change of clothes as they traveled across their home countries and Mexico.

Sister Pimentel said one group of volunteers stays until 1 a.m. cleaning and preparing for the next day’s newcomers. Others volunteer along with their children as young as 8.

Ivania Molina Melendez, a parishioner at Our Lady of Perpetual Help Church in McAllen, said she was exhausted by the end of her day of helping, but that she was filled with joy from serving.

She said the volunteers are overwhelmed by the stories the women share about their journey. They see them arrive hungry and grateful for a place to rest, grateful for a bag of supplies, grateful for the prayers from strangers before their bus leaves, en route to Boston, New York City, Houston, San Antonio, Chicago.

“They come with so many hopes,” she said, “It is difficult to know what waits for them, and how long they will remain.”

Riojas is the editor of The Valley Catholic, newspaper of the Brownsville Diocese.