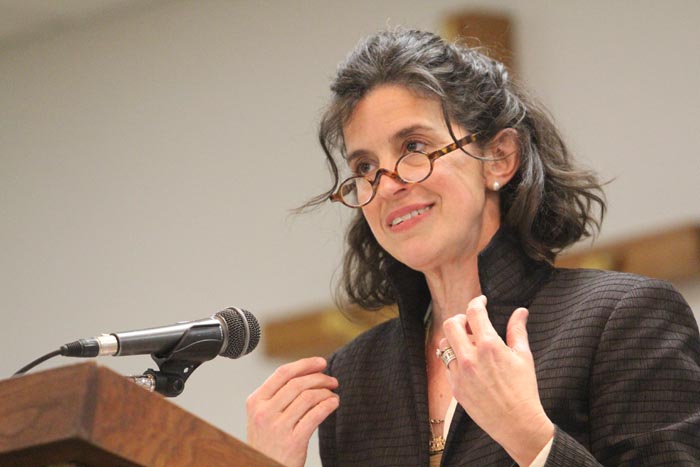 Helen Alvare is pictured in this undated file photo. (Photo by Sarah Webb)

CHARLOTTE, N.C. (CNS) — Based on her own research and interviews with women, including many post-abortive women, Helen Alvare said women today have a host of concerns that need attention from government and society and getting free contraceptives is not among them.

“Women do not think free contraceptives will make their lives free and happy,” she told members of the Catholic media in an evening keynote speech June 20 in Charlotte.

She said “what they really care about” is addressing poverty, which affects more women than men, having paid leave so they can take better care of their children, earning a living wage and getting help with aging parents’ needs. Women, she said, bear most of the responsibility for caring for aging parents.

The focus on the Affordable Care Act’s contraceptive mandate “has sucked the oxygen out of the room,” leaving little chance to discuss issues many women consider more important, she said.

Alvare, a professor at George Mason University School of Law in Virginia, was the keynote speaker at the closing awards dinner at the June 18-20 Catholic Media Conference in Charlotte. At George Mason, she teaches family law, law and religion, and property law.

She spearheads a movement called Women Speak for Themselves to defend religious freedom and promote “a real women’s agenda.”

She outlined the process and rationale that led the Obama administration to require that most employers, including religious employers, provide free coverage of contraceptives in their employee health plans.

She also discussed why she thinks Catholic women especially should understand the mandate as a threat to religious freedom and urged the Catholic media to communicate the church’s “amazing teaching” about marriage, sex and parenting.

Under the federal health care law, the Department of Health and Human Services’ mandate directs most employers, including religious employers, to provide employees coverage of contraceptives, sterilization and some abortion-inducing drugs free of charge, even if the employer is morally opposed to such services.

It does include a narrow exemption for some religious employers that fit certain criteria. The government provides what it calls an “accommodation” to nonexempt employers, who must direct a third party, such as the administrator of their insurance plan, to provide the objectionable coverage.

Alvare reviewed the process that led HHS to issue the contraceptive mandate — it did so based on a recommendation by the Institute of Medicine that sterilizations and all contraceptives approved by the Food and Drug Administration be included free of charge among mandated preventive services for women in all health plans.

According to Alvare, the institute in turn based its recommendation on “junk empirical case studies,” conducted by the Guttmacher Institute, an affiliate of Planned Parenthood.

The argument for free contraceptives “is like the abortion debate all over again,” said Alvare. “All women want” free contraceptives; they are “absolutely necessary for women’s health”; they’ll reduce unintended pregnancies and abortions; and “if you make it free, more women would use it.”

But statistics tell a different story, according to Alvare. Even with the availability of contraceptives, the rate of children born out of wedlock has gone “through the roof,” she said.

Since the 1960s, feminism has been selling women on the “misbegotten notion that men live with the idea of sex without babies” and they can too and that that’s equality, she said. “Sex without kids is the ‘sine qua non’ for women.”

The government wants to “prevent children from suffering by keeping them from being born in the first place,” Alvare added.

Catholic women in particular should see the contraceptive mandate as a religious freedom issue, she argued, because Catholic women “practice the faith more than men” and they are on the front lines of a church the pope has called “a field hospital after battle.”

Women make up a greater percentage of the poor and are more likely to be single moms, she noted.

Alvare also emphasized that women need to be prominent in religious leaders’ fight against the contraceptive mandate all along the way.

She pointed to a 2012 congressional hearing during which religious leaders testified against the contraceptive mandate, explaining why it is an affront to their religious liberty rights. Though she had been asked to testify at the hearing, she later was told she wouldn’t have to — and the only voices heard in opposition to the mandate were from male clergy.

She challenged her audience of Catholic communicators to report stories that show their viewers, readers and followers that Catholic Church “has stunning things” to say about marriage, sex and parenting.”

“We have to find a way to communicate this,” she said. “The church has so much to offer on women and marriage and family in the marketplace.”

NEXT: Texas diocese responds to immigrants’ need in surge of children