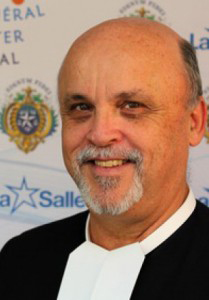 Brother Robert Schieler, F.S.C., was elected Superior General of the Institute of the Brothers of the Christian Schools (De La Salle Christian Brothers) on May 20 at the Institute’s 45th General Chapter in Rome.

Philadelphia born and educated, Brother Robert is the 27th successor to St. John Baptist de La Salle (1651-1719). As such he will lead the largest teaching congregation of men in the world with approximately 4,300 members serving in 80 countries.

Brother Robert was born in the former Most Blessed Sacrament Parish in West Philadelphia and was taught by the Christian Brothers at West Philadelphia Catholic High School for Boys. After his 1968 graduation he entered the Christian Brothers in Ammendale, Md. He received his bachelor’s degree in history from La Salle University in 1972 and also earned a master’s degree in European history from Notre Dame University and a doctorate in educational administration from the University of Pennsylvania.

His first teaching assignment was at La Salle College High School, 1972-75, after which he was missioned to the Philippines where over 11 years he served in a variety of posts from principal to superintendent of schools.

Upon his return to the Philadelphia area he was named assistant principal at Archbishop Carroll High School, Radnor. In 2001 he was elected Provincial for the Baltimore Province of the Christian Brothers. And most recently was General Councilor for the Lasallian region of North America.

He is the third American to be elected superior general for the world-wide Institute.

Brother Robert responded to questions via email from Rome.

Q. You were introduced to the Christian Brothers at West Catholic. What was it about them that impressed you?

A. I was attracted by their collective vitality and enthusiasm and the personal interest they took in us, their students.

Q. Your founder, St. John Baptist de La Salle, was himself a priest but he insisted that the members of his Institute not take holy orders. Why was that?

A. John Baptist de La Salle believed that the ministry of teaching children of the working class and poor to ensure their salvation both in this life and in heaven was so important that it demanded the total commitment of the brothers. He feared if some brothers were ordained priests the local bishop would avail of their service for parish ministry. He did not want his brothers to be engaged in any other ministry than that of teaching the young.

Q. How has the Institute changed since St. John Baptist de La Salle founded it, and how has it not changed?

A. The Institute has not changed from its exclusively lay religious character and its commitment to education by a community of educators. It has changed in that this important teaching ministry in the church is now shared with thousands of lay women and men who understand what they do is a vocation, one of the most necessary vocations in the church.

Q. The first Christian Brothers arrived in Philadelphia in 1850, which I think was really their first venture into the United States. They came at first to teach adolescent boys in parish schools. Does that mission still hold anywhere?

A. There was actually an earlier venture in 1817 when three brothers arrived in the United States from France.  They went to Genevieve, Missouri, to start a school. However, this original mission failed when the bishop divided the brothers into three different assignments. They were no longer a community of educators – “together and by association.” Community life and accomplishing our educational mission as a community is one of the three constitutive elements of our vocation. Consecration and mission are the other two.

In 1845 the brothers established a school in Baltimore and that became the first permanent foundation in the United States. The school still exists today with its same name: Calvert Hall College.

Q. From what I sense, higher education seems to be the main focus, at least here in America. Can you comment?

Q. When you entered right after Vatican II, the church was undergoing a period of turmoil with sweeping changes. Some questioned the value of vowed religious life, and most congregations, including the Christian Brothers, lost members. Are we recovering from that?

A. No, we have yet to fully recover from the sweeping changes of the 1960s and 1970s. Vocations remain few in the United States and across the northern hemisphere. We are doing better in Latin America, Africa and Asia. I would say though that through the commitment of 80,000 lay women and men, we have more schools with more students than at any other time in our history. We are living a graced moment as the charism of St. John Baptist de La Salle has been a gift for the entire church.

Q. At least in America, and probably Europe also, your schools are staffed mostly by lay people. How do you maintain your unique Catholic/Christian Brother identity under these circumstances?

A. For more than 30 years our brothers around the world have been offering a variety of formation programs to educate our lay faculty in the educational philosophy and spiritual vision of St. La Salle. We have been genuinely touched by the enthusiasm of our lay colleagues for the Lasallian heritage. Many are embracing it as their own. They tell us we have given them a language to articulate what they always believed was their vocation as teachers.

Q. There are areas in the world where the institute is growing. Where are they?

A. As I mentioned above, the institute is stable in Latin America and growing in Africa and Asia.

Q. Eighty countries means almost as many different cultures. What is the common ground for brothers from America, from Hong Kong, from Madagascar, from France the mother country?

A. The common ground is our shared Lasallian heritage. We remain faithful to the charism of Christian education of the young and the poor that we inherited from St. La Salle, the Patron of Teachers. We do so, not as individuals, but as a community of educators. That was St. La Salle’s genius; it was as a community of men totally dedicated to teaching and living and supporting one another in community that the educational ministry was going to succeed.

Q. In an interview 11 years ago, as you were ascending the administrative ladder, you said your preference would be to be a classroom teacher. Does that still hold?

A. While I would love to be back in the classroom, I fear I have now been away from it for so many years that it might be more of a challenge than being the Superior General!

Q. What, with the help of God, do you see as your challenges in your coming years as Superior General?

A. The challenge is to continue promoting the brothers’ vocation, offering quality formation programs for our lay teachers, caring for our senior brothers and having sufficient financial resources to sustain our schools and educational centers, especially those for the poor.

NEXT: A Philly guy through and through, this judge keeps Catholic principles at his core