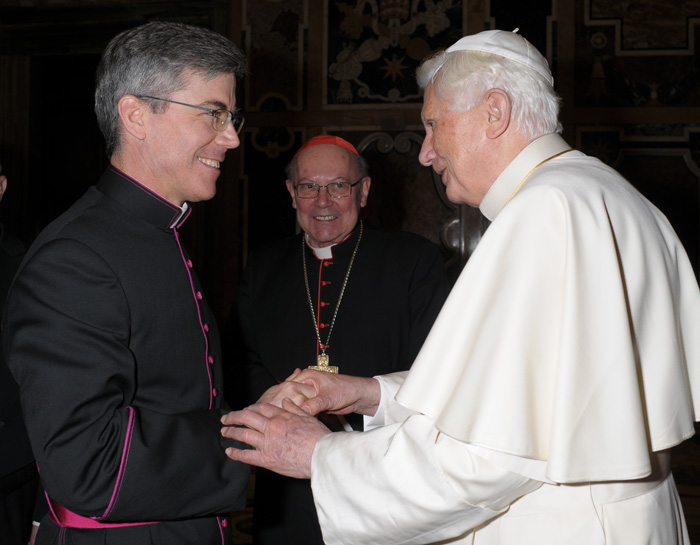 Archbishop Charles J. Brown, apostolic nuncio to Ireland, is pictured being greeted by retired Pope Benedict XVI in 2010. The Catholic Church in Ireland has been through 20 years of winter, but its American-born papal nuncio said a springtime is beginning, and he sees “green shoots.” (CNS photo/LOsservatore Romano)

DUBLIN (CNS) — Young people are helping lead a rebirth of the Catholic Church in Ireland, said the American-born papal nuncio serving in the country.

Archbishop Charles J. Brown described the rebirth as the spring after 20 years of winter, saying he sees “green shoots.”

“You see a renewed enthusiasm among young Catholics in Ireland now,” said Archbishop Brown, who was appointed as papal ambassador in November 2011, at the cusp of the church’s troubles stemming from a long-standing period of unreported clergy sexual abuse.

The new generation of Catholics, some of whom are studying for the priesthood at St. Patrick’s College, the national seminary in Maynooth, or the Pontifical Irish College in Rome, will “lead the church forward into the next decade,” he said. Young Catholics represent what is best in the tradition of Vatican II, “the idea of communicating the ancient unchanging faith in a new, vibrant and attractive way,” he told Catholic News Service.

“We’ve never seen a nuncio like him in Ireland,” said Bishop Brendan Leahy of Limerick. “He has made a remarkable impact through his extensive pastoral outreach. He has met people and attended events the length and breadth of the country. All of this gives him great insight into the life of the church in Ireland. People have been very touched by his pleasant demeanor and friendliness.”

Archbishop Brown, the oldest of six children, was born in New York and studied history at the University of Notre Dame. He was ordained a priest for the Archdiocese of New York in 1989 and was assigned for two years to St. Brendan Parish in the Bronx, before Cardinal John J. O’Connor sent him for doctoral studies in sacramental theology in Rome. The plan called for the young priest to return to the archdiocese to teach theology at St. Joseph’s Seminary in Dunwoodie, N.Y. However, he was recruited to a position at the Congregation for the Doctrine of the Faith.

He worked for the congregation until his appointment as nuncio in November 2011. Among his tasks was handling child abuse cases. He also worked earlier with then-Cardinal Joseph Ratzinger, who later became Pope Benedict XVI.

In 2011, when strained relations between the Irish government and the Vatican over revelations of clergy sexual abuse in the church lead to the closure of Ireland’s Vatican embassy, it was perhaps not surprising that Pope Benedict thought of his former congregation colleague to fill the role of nuncio.

“I was surprised when he asked me because I hadn’t trained as a diplomat,” Archbishop Brown said. He recalled feeling “more trepidation” at first than he revealed to others, but that since moving to Ireland, he has experienced the “embrace of the Irish.”

Catapulted into a difficult situation, he said the biggest challenge was trusting in God.

“You look at the great history of the church in Ireland, the saints, its 15 centuries of faith, and you realize how inadequate you are to play a role in the continuation of that,” Archbishop Brown said.

“Those are moments that pass. The biggest challenge is not to focus on ourselves and difficulties but keep our eyes focused on Christ, God made man. Then all things are possible.”

In the 25 years since he was ordained, Archbishop Brown has witnessed many changes within the church and he expects more will come. He said he sees positive signs on the vocations front, but that it is realistic to expect that the overall number of priests will continue to decline for a while.

“Parishes will have to share resources and combine and cluster, and that will be an opportunity for lay people to take on a larger role in the church,” he said.

Women, “the heart of the church,” should be more visible, assuming roles in administration “even in Holy See. I’d be very surprised if we don’t see that happen under Pope Francis.” He also welcomed the new generation of “very impressive” female theologians.

But he said priestly vocations remain crucial for church renewal.

PREVIOUS: Pope, at charismatic rally in stadium, invites them to Vatican in 2017