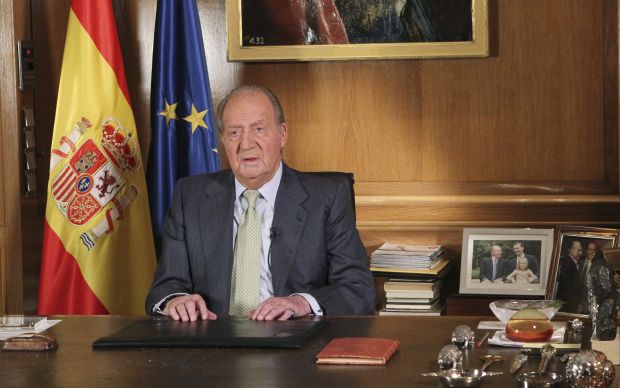 OXFORD, England (CNS) — King Juan Carlos of Spain received a tribute from the country’s bishops after he announced his decision to abdicate in favor of his son.

The executive committee of the Span’s bishops’ conference described the work of the outgoing 76-year-old king as having “extraordinary value” because of his work on behalf of democracy during his 39 years on the throne.

“All Spanish bishops recognize and appreciate the work of His Majesty the King, Don Juan Carlos, and his generous gifts and contributions to Spain’s recent history, particularly to establishing and consolidating democratic life, which was especially relevant during the political transition,” the bishops’ committee said in a June 2 statement.

It said Crown Prince Felipe de Borbon y Grecia, Prince of Asturias, who will succeed his father, had “proved his qualifications and competence” to continue the monarchy’s “constitutional service.”

Meanwhile, Archbishop Julian Barrio Barrio of Santiago de Compostela, praised the king’s “affection” for the western Catholic shrine and close ties with the city, as well as his periodic attendance at Mass in the city’s historic cathedral.

“I feel utmost respect for his decision,” the archbishop said in a June 3 message posted on the archdiocesan website.

King Juan Carlos, who assumed the monarchy when it was restored after the 1975 death of 36-year dictator Gen. Francisco Franco, was widely acclaimed for backing parliamentary democracy in Spain, and facing down an attempted February 1981 military coup by Franco supporters.

However, public support for the monarchy slumped in the last five years when the king’s eldest daughter, Infanta Cristina, and her husband, Inaki Urdangarin, were investigated for alleged embezzlement of public funds, and when Juan Carlos broke a hip on a lavish April 2012 elephant hunting trip to Botswana during Spain’s economic recession.

In his June 2 televised announcement, the king said he had taken the throne hoping Spaniards would “become protagonists of their own destiny,” in “a modern democracy, fully integrated into Europe.”

He added that he felt “pride and gratitude” that Spain had since achieved, “in times of great uncertainty and difficulty, a long period of peace, freedom, stability and progress.” He said he believed the new generation could “justly claim a starring role in forging the future.”

Meanwhile, the Catholic Communion and Liberation organization welcomed the Juan Carlos’ summons to a younger generation, and said it expected the new king to “promote true coexistence” and “inspire in all of us a radical desire to affirm the other person.”

“One generation assumed its responsibility 39 years ago, leaving behind old divisions and building a society no longer based on the view that other was an enemy to be eliminated,” the group said in a June 3 communique.

“In the same way, a new generation is now called to express its desire for true coexistence, excluding the aggressive and sterile dialectic, which has eroded our democracy in recent years.”

The 75-year-old queen was to receive a Path to Peace prize June 3 in New York from the Holy See’s permanent observer to the United Nations, Archbishop Francis A. Chullikatt.