Because of distance, pope will not walk in Corpus Christi procession 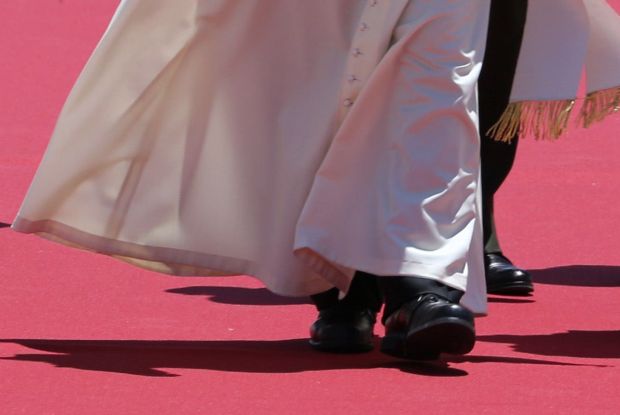 VATICAN CITY (CNS) — Because he is experiencing some trouble walking long distances, Pope Francis decided not to join the Corpus Christi procession after the Mass he was scheduled to celebrate the evening of June 19, the Vatican spokesman said.

While assuring reporters that the pope was not ill, Jesuit Father Federico Lombardi, Vatican spokesman, said, “The pope will go directly by car to the square in front of St. Mary Major and wait for the arrival of the procession with the Blessed Sacrament.”

“The pope decided it was opportune to forgo walking the long itinerary” — 1 mile — between the Basilica of St. John Lateran, site of the evening Mass for the feast of the Body and Blood of Christ, and the Basilica of St. Mary Major, Father Lombardi told reporters June 19.

Pope Francis walked the path last year on the feast day, following a truck where the Blessed Sacrament was exposed for the crowds. During his pontificate, Pope Benedict XVI rode, kneeling on the truck, as did Pope John Paul II when he began having difficulty walking.

Father Lombardi said Pope Francis, 77, “prefers to avoid” participating in the procession by riding on the truck “so that, in accordance with the spirit of today’s celebration, the attention of the faithful would remain focused on the Blessed Sacrament” and not on the pope.

In addition to the difficulty he has walking long distances, the pope wanted to preserve his energy for his June 21 visit to Cassano allo Ionio, about 230 miles southeast of Rome, the spokesman said. The pope’s visit is expected to begin with a 9 a.m. visit to a prison and include a visit to a hospice for the terminally ill, lunch with the poor, an afternoon visit to a home for the elderly and a late-afternoon Mass. He was scheduled to leave the town at 6 p.m. for a helicopter flight back to the Vatican.

The announcement of the pope’s decision not to participate in the procession came just a few days after the Vatican announced the pope’s summer schedule. Although the schedule was almost identical to the pope’s 2013 list of summer activities, the fact that he was suspending his general audiences in July and not inviting guests to his early morning Masses in July or August led some to speculate he was not well.

Noting that the stories were generated by U.S. news outlets, Father Lombardi said, “You just have to watch him, look at his schedule and see how he is with the crowds — three hours yesterday (at the general audience June 18) — to see he is fine.”

“Try doing half of what he does,” starting with a 7 a.m. Mass and frequently ending with an evening appointment just in time for dinner at 8 p.m., “you’d think you were Superman,” Father Lombardi said.

NEXT: Vatican publishes reflection on discerning essentials of faith