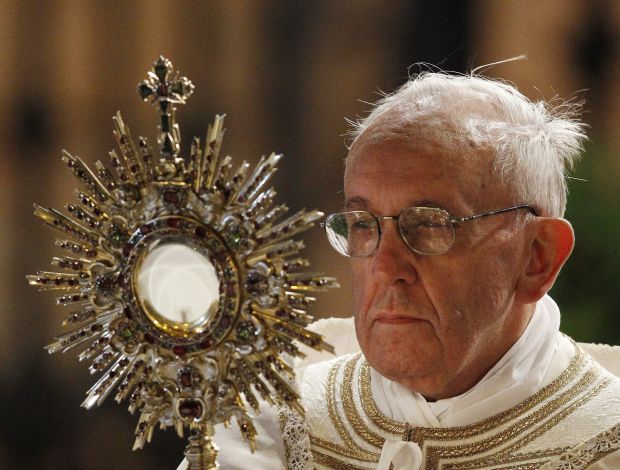 Pope Francis leads the Benediction outside the Basilica of St. Mary Major at the conclusion of the Corpus Christi procession in Rome May 30. (CNS photo/Paul Haring)

Updated – ROME (CNS) — Jesus is the living bread that can satisfy a person’s deepest yearnings, Pope Francis said on the feast of the Body and Blood of Christ.

“Besides physical hunger, people have another hunger, one that cannot be satisfied with ordinary food,” the pope said June 19. “It is the hunger for life, hunger for love (and) hunger for eternity.”

Although he celebrated the evening Mass outside of Rome’s Basilica of St. John Lateran, as his predecessors did, the Vatican announced earlier in the day that Pope Francis would not walk in the one-mile Corpus Christi procession after the Mass. Instead, he was driven to the procession’s endpoint, the Basilica of St. Mary Major, where he officiated at the Benediction of the Blessed Sacrament.

With thousands of people gathered on the lawn in front of St. John Lateran, Pope Francis celebrated the Mass without apparent difficulty walking, sitting or moving. He appeared to move easily at St. Mary Major as well.

The body and blood of Christ, he said, can give people eternal life because “the substance of this bread is love.”

Living the Catholic faith, the pope said, means “allowing yourself to be nourished by the Lord and building your life not on material goods, but on the reality that does not perish: the gifts of God, his word and his body.”

The first reading at the Mass, from the eighth chapter Deuteronomy, recounted how God fed the Israelites with manna in the desert after freeing them from slavery in Egypt. Pope Francis said that as they journeyed in the desert, the Israelites “ran the risk of forgetting the sad events of the past, which were overcome thanks to God’s intervention and his infinite goodness.”

Some of the people, the pope said, were whining about missing the “the meat and onions they ate in Egypt, but forgetting that they ate those meals at the slaves’ table.”

Moses urged the people to remember what God had done for them and recognize again “the experience of total dependence on God,” the pope said.

Catholics today also need to recognize that “some people nourish themselves with money, others with success and vanity, others with power and pride,” the pope said. While such things may appear “more satisfying,” the people tempted by them forget “those are meals eaten at the slaves’ table.”

“Each one of us can ask ourselves: Where do I want to eat? Where do I want nourishment? At the Lord’s table? Or do I dream of eating tasty food in slavery?” the pope asked.

Catholics need to be attentive, remember all God has done for them — “this is our task,” he said, and “recognize the false bread that deceives and corrupts because it is the fruit of selfishness, self-sufficiency and sin.”

Pope Francis asked those participating in the Corpus Christi procession to pray to Jesus present in the Eucharist: “Jesus, defend us from the temptation of worldly food that makes us slaves — it is poison — purify our memory,” and help each person to recognize the bread of life in the “memorial of your gesture of redeeming love.”

NEXT: Because of distance, pope will not walk in Corpus Christi procession