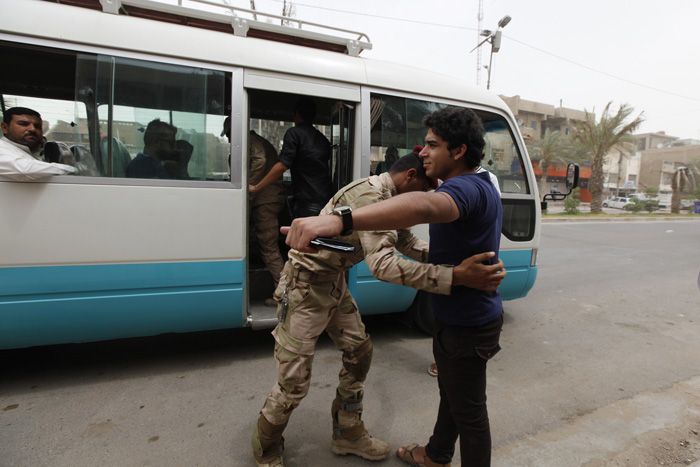 A member of the Iraqi security forces searches a man at a checkpoint in Baghdad June 11. Baghdad will cooperate with Kurdish forces to drive militants out of Mosul, the country's second-biggest city. Christians are among 500,000 fleeing Mosul after Islamist forces seized it in early June. (CNS photo/Ahmed Saad, Reuters)

BEIRUT (CNS) — Church leaders in northern Iraq struggled to find shelter for Christians who were among hundreds of thousands who fled Mosul, the country’s second-largest city, after Islamist forces took over much of the town, a Chaldean Catholic archbishop said.

“The soldiers and all policemen left the city,” seemingly abandoning the people, Archbishop Nona wrote. He called the situation a tragedy.

“And we started organizing, working all through the night, to find a place for them (the people who had fled Mosul) in nearby villages,” the archbishop said.

News reports said several hundred heavily armed members of the al-Qaida-inspired Islamic State of Iraq and the Levant occupied government facilities, broadcast stations and banks as they worked their way through the city.

The BBC reported that up to 500,000 people left Mosul as the ISIL forces occupied the city. Many headed to three towns in Kurdistan in northern Iraq, where temporary camps were established.

The exodus from the city of 1.8 million, 220 miles north of Baghdad, continued throughout the night and day June 10, with many of the people leaving on foot with no belongings, Archbishop Nona said.

“I met with a family who have two young children, 2 and 3 years old, who walked for five hours through the night, and they were very scared. We placed them in one house with another family in Telkef (in my diocese, two miles from Mosul),” the archbishop said.

“All our churches in Mosul are closed, and there is not one Christian in the city,” Archbishop Nona added.

The archbishop also pleaded for international assistance to step in to provide aid to the people fleeing Mosul.

Iraqi Prime Minister Nouri al-Maliki called on parliament to declare a state of emergency June 10 after the government lost control of Mosul and parts of Nineveh province.

The Islamic State of Iraq and the Levant began as an Iraq-based affiliate of al-Qaida. It is fighting to establish an Islamic state in parts of Iraq and Syria. Al-Qaida’s central leadership has denounced the organization for apostasy and excessive violence. It is estimated to have 3,000-5,000 fighters.